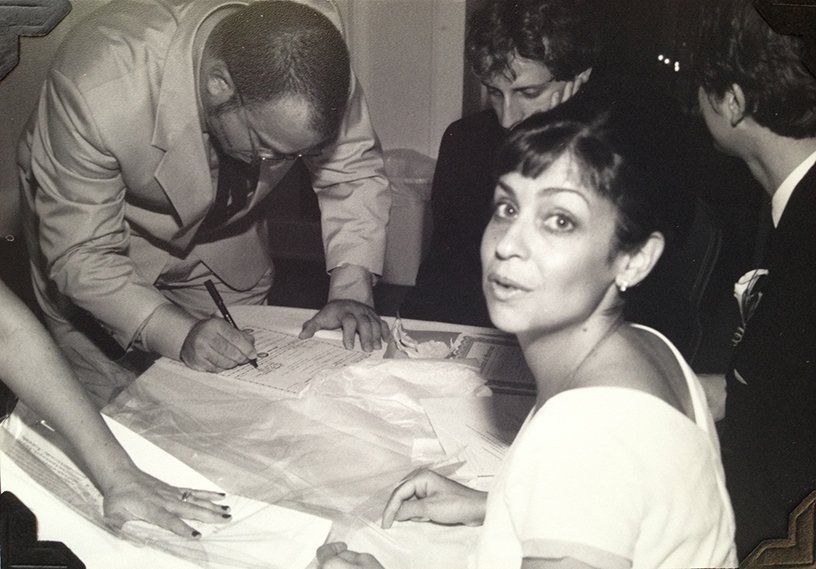 Leora has been asking me for a long time to start writing about interfaith parenting and family issues. This piece is the beginning of what I hope will be a regular column. Sometimes it’ll be light-hearted and other times more serious, but I wanted to start here, with why I think it matters that we talk about it.

A few weeks ago, my family was honored at our synagogue. We got to stand at the front of the congregation on a Friday night, light the Shabbat candles, and my 6 year old led Kiddush. My parents were in town visiting, and they came up, too.

It’s significant for a few reasons. First, I’ll just be honest, I’m ambivalent about the fact that we even belong to a temple. In my 20s, I never saw myself as someone who would join a synagogue. I never felt that I fit in at our congregation as a kid, and when I went away to college and lived in the Jewish dorm, I struggled to see what, besides our Jewishness, I had in common with the girls on my floor. Now, I’ve never been ambivalent about my identity as a Jew, but I have wrestled with the idea of the mainstream Jewish community and my place in it. A lot of that is tied up in class and wealth and is a column for another time, but a younger me wouldn’t have guessed that on a gorgeous summer Friday night, I’d be standing at the front of a synagogue, receiving a blessing from a man I refer to as my rabbi.

It was even more significant because we were receiving a blessing on the occasion of our tenth wedding anniversary. And ten years ago, when Mike and I were planning our wedding, we couldn’t find a rabbi in town to marry us, couldn’t be married in a temple. Mike isn’t Jewish. To be fair, I wasn’t deeply invested in finding clergy to marry us. So we took “no” for an answer and moved on. It really didn’t matter that much. We were married under a huppah that Mike constructed, in a civil ceremony we wrote ourselves, officiated by a Jewish friend with internet ordination. We danced, ate, I sat on my brother’s coffee (it came out with dry cleaning), and ten years and two kids later, it suddenly started to matter.

When it started to matter, it took me by surprise. It was when I was working on the marriage amendment. I kept standing up and talking in front of groups about my marriage, my legal marriage that the state recognizes. I started to notice that, while the gay activists who stood beside me weren’t able to legally marry their partners, they all, almost without fail, talked about the ceremonies they’d had in their places of worship, supported by their faith communities. It felt ironic. I was working to organize the Jewish community to defeat the marriage amendment, knowing that many of my allies, the Jews who stood alongside me for marriage equality, saw my marriage as problematic for the Jewish community.

The language has changed, I know. It’s no longer, “Interfaith marriage is bad,” it’s “let’s discourage interfaith marriage but once it happens, let’s figure out how to engage those families.” It is a change. It’s progress. But it’s still hard not to imagine how my children will feel about the idea that creating families like ours should be discouraged. Or that I made a mistake or did something wrong by choosing Mike to be my partner, their father.

I sat with a rabbi, a colleague, a few months ago and asked him for his perspective on the marriage issue, and he explained that, for him, the problem with performing an interfaith marriage is that he felt it would be over-stepping to presume to be able to act as clergy to someone choosing not to be a Jew. I respect his perspective, and I really listened to him, but his words were hard to digest; that every day, Mike is choosing not to be a Jew. I mean, I get it. But what’s always been central to our family, at least in our Jewish life, are those other choices he’s been making. The choice to put his own faith traditions behind him, to turn away from the known, the comfortable, the easy. To raise his children in a community he wasn’t sure would accept him. To have to break it to his parents that he wouldn’t be with them on their most precious holidays, to have to tell them, essentially, that the way they’d raised their children wouldn’t be the way he raised his. To throw his lot in with mine and our children’s and become part of our community and our history.

In ten years and two kids, there have been a lot of those choices, and hard conversations. In some ways, the challenges of an interfaith family are the challenges of every family. It’s hard to watch your children grow up and move away, create their own traditions, regardless of the role that faith plays. My in-laws have had to give up a lot of the way they imagined their grandchildren interacting with their traditions. They’ve struggled with the logistics but never the acceptance. We are a Jewish family with non-Jewish members.

Mike sits next to me at Shabbat services, and that night on the bimah, when we received our blessing on our tenth anniversary, he mumbled Kiddush alongside me. And he is still not a Jew, and he doesn’t always feel like he fits in with the Jewish community. And I know what that feels like, and when I see him trying anyway, it makes me try harder. To make his choice to be part of all this worth it.

When we joined a synagogue, we joined one that, today, would have married us. It felt important to me to raise my children in a congregation that will welcome them for all of their future lifecycle events. Actually, just in the interest of the theme of ambivalence, I’ll tell you that we joined one synagogue, and after several years, when it didn’t feel like the right fit, we switched to a different one, where we are now at home. And there you have it – for someone who didn’t see herself as a joiner, my tally is at two. But both would have married us today, and when I talked to my rabbi (there he is again) about some of this, he reminded me that he can and does perform interfaith marriages and asked if I wanted a Jewish wedding, maybe a vow renewal. He would officiate. We could do it in the backyard. 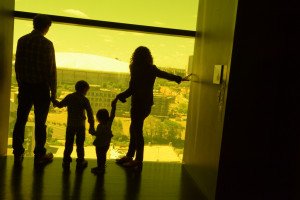 I really thought about it. I love an excuse to make my husband dress up, and we still have our huppah in the garage, but ultimately I decided I don’t need it. We’re still who we were when we got married ten years ago; we chose each other and everything that came with us, and I don’t want to rewrite that. A ceremony isn’t going to make us more of a Jewish family than we are now. What I realized matters to me is not the wedding, it’s everything else that comes along with being part of a community that’s still on its way to seeing all of our families as vital members. I don’t need to have a Jewish wedding – what I need, for my children, is for my community to continue to evolve, to move, to accept, and to let go. Families like mine are not a problem for the Jewish community, we are the Jewish community.

At top: Signing our interfaith ketubah. At right: Photo by Steven Cohen