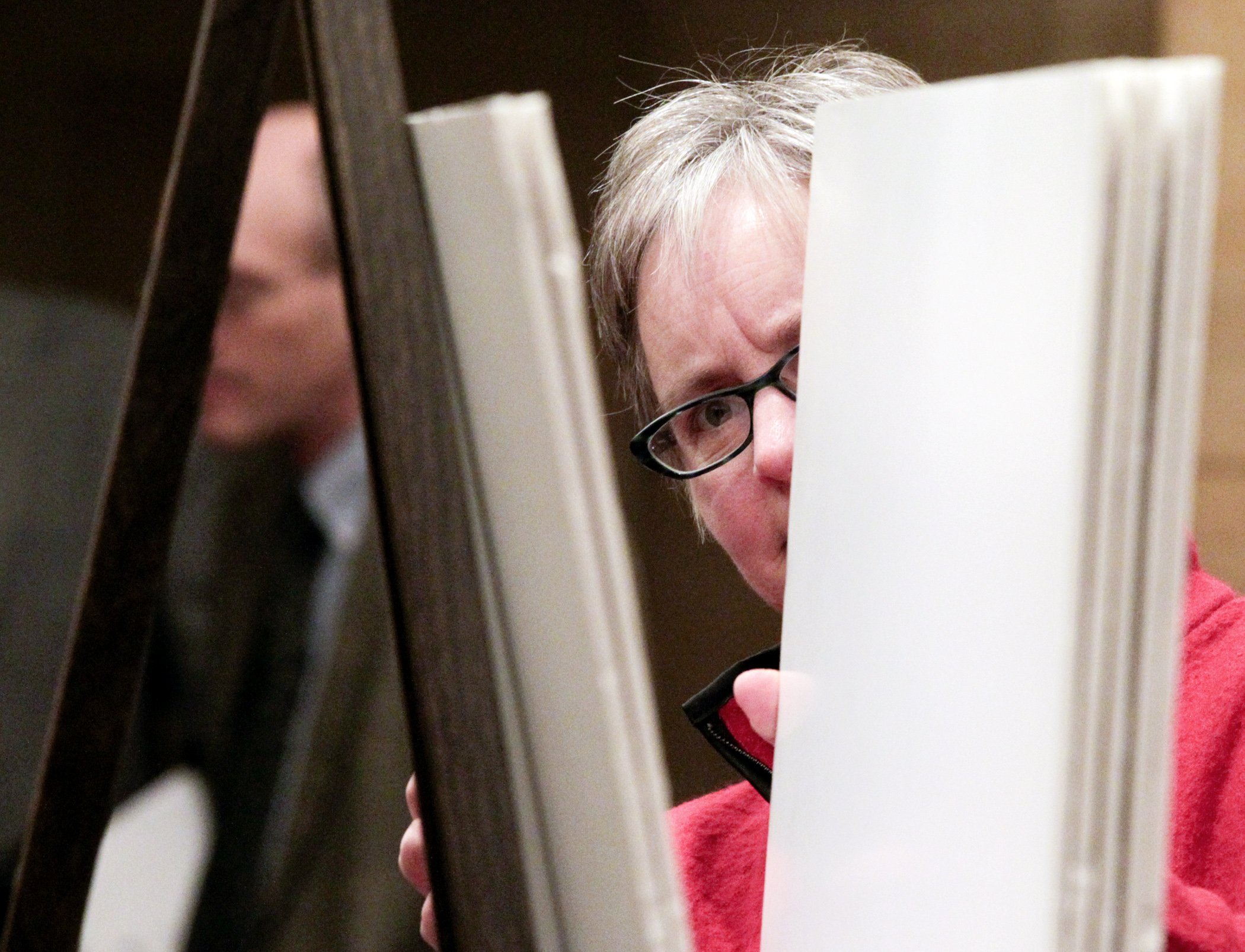 State Budget Director Margaret Kelly looks through charts prior to the Minnesota Management & Budget presentation on the November forecast. (Photo by Paul Battaglia)

State leaders will enter the 2014 legislative session with a projected $825 million budget surplus. However, caution is being urged.

Those were the messages from Minnesota Management & Budget as the November Economic Forecast was released. The twice-annual forecast provides a snapshot of the state’s economy and predicts if the state should have a projected surplus or budget deficit.

“This is certainly a better problem to have than the alternative,” said Gov. Mark Dayton.

According to MMB, the projected balance for the 2014-15 biennium is $1.086 billion; however, the first $246 million of the balance must statutorily be used to complete repayment of the K-12 school property tax recognition shift. Another $15 million will go to the state airports fund to restore money that was first borrowed in 2008.

“Paying back our schools is a victory for Minnesota kids and for our future,” said House Speaker Paul Thissen (DFL-Mpls). “In addition, our commitment to responsible budgeting is paying off. For a decade, Minnesota backed itself in a corner with short-term budget fixes, shifts and gimmicks which limited the choices we had to make the investments we need to make.”

MMB Commissioner Jim Schowalter said Minnesota is one of the top states when it comes to economic performance, while the continued federal political budget and spending fights are resulting in a slightly weaker U.S. economic outlook.

According to an executive summary, the state’s economy continues to make solid gains: “Stronger employment and income growth in 2013 are contributing to a $787 million increase in forecast revenue in the current biennium due to projected increases in income and corporate tax collections. Forecast spending is down $247 million due in part to lower health and human services spending.”

State Economist Laura Kalambokidis said the state’s unemployment rate has fallen to 4.8 percent in October, the lowest since the recession began in December 2007. The number is 2.5 percent below the national rate.

However, House Minority Leader Kurt Daudt (R-Crown) said it is not time for “a victory lap,” noting that 49 percent of Minnesotans are still unemployed or underemployed.

Kalambokidis also said corporate profits are running high, and that higher income and corporate tax estimates are the source of almost all of the additional forecast revenue.

“This confirms the Minnesota model for economic success – a balanced approach” Dayton said. “We’re not the lowest-taxed state, we don’t strive to be – we haven’t been under Republican governors or Democratic governors – but we’re a high-value state. By putting money into education we have a well-educated workforce, we look at high-value manufacturing. … The fact that we’re the fifth-fastest growing state economy in the country and other objective measures just show that that kind of fear-mongering and nay-saying about Minnesota, which is, unfortunately the norm in parts of our system in the state, are once again being defied by the facts.”

Before legislators and special interest groups begin to salivate about what can be done with the new money, Schowalter urged caution.

“This is a great place to be, but we know that we’re very early in the biennium,” he said. “We know that there are a lot of uncertainties out there and we want to be sure that any changes we do make are sustainable, whether they are tax changes or spending changes. That’s going to require consistent fiscal management that has gotten us to this point. Or repaying the shifts and replenishing the reserves.”

Another forecast is scheduled to be released near the end of February, which, coincidentally, will be right around the Feb. 25 start of the 2014 session. Schowalter says there’s always the potential that the February forecast could show a very different picture.

Dayton said he will not release a supplemental budget until after the February forecast is released.

“If these numbers hold, I expect to propose the elimination of all three business-to-business sales taxes effective April 1, 2014, at a cost of $231 million for the rest of the biennium,” Dayton said. “My other priority is a tax cut for middle-income Minnesotans by, for example, conforming to all the federal tax cuts, which would cost about $205 million this biennium. That would include eliminating the marriage penalty, which would reduce state taxes for some 640,000 Minnesota taxpayers and it would include increasing the working-family credit, which would lower state taxes for about 53,000 taxpayers.”

Assistant Senate Majority Leader Katie Sieben (DFL-Newport) was not willing to say if the Senate DFL would support a repeal of the business-to-business taxes passed last session.

“We’ll want to look at the February forecast and get those more up-to-date numbers before those decisions are made,” she said.