(Photos courtesy of the Minnesota State Fair) An aerial view of the new venue.

A longtime exhibit and entertainment area at the Minnesota State Fair, most recently known as Heritage Square is, well, history, with a shiny, multimillion-dollar upgrade rising in its place.

In the view of the fair’s general manager, Jerry Hammer, both the new West End Market and adjacent transit hub are improvements long overdue.

“The Heritage Square facility was originally built in 1964 as the Teen Fair, and that type of construction was never intended to last,” said Hammer. “The whole area was in desperate need of replacement for 30 years. The only thing holding much of it together was the paint.”

On the transit side, Hammer said, the fair has outgrown its space for bus parking south of Como because of the popularity of park-and-ride lots.

“While traffic has decreased significantly in the neighborhoods surrounding the fair during the past two decades, on Como it’s actually grown more congested because of additional buses,” he said. “Moving the transit hub on-grounds has been something we’ve planned for many years, and it should have a major positive impact on traffic and safety.” 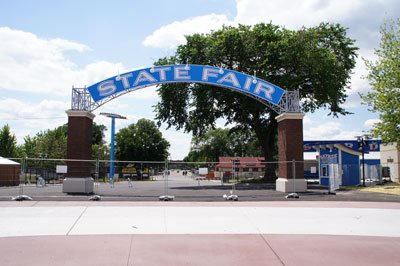 Heritage Square was an elevated area, and a lot of earth has been moved to lower the site to street level. While formerly there were only two entrance and exit points, the West End Market will be open for easy access and egress.

Left: The entrance to the West End Market is marked by an arch that once welcomed streetcar riders to the fair.

It will be anchored on the west by a new amphitheater that will continue to offer old-time, bluegrass, polka and the other musical styles that were favorites at Heritage Square.

In the same area, Lulu’s Public House, developed by the Axel’s Family of Restaurants, will be offering food and drink, as will the Blue Barn, operated by the Blue Plate Restaurant Co., at the opposite end of West End Market.

Also on the east side is the new State Fair Museum, developed in cooperation with the Minnesota Historical Society. Adjacent to it is the old log cabin that was saved from Heritage Square.

The old train depot and several railroad cars have been retained, the cars exhibited on a berm that forms the northern boundary; in the center of the plaza are six permanent pavilions that will be home to concessionaires.

The Minnesota Newspaper Museum, a replica of an old-time newspaper office that prints a daily edition during the fair, has moved from the site to the arcade of the 4H Building on Cosgrove Street.

“I think they’re going to be pleasantly surprised at how much traffic they get there,” Hammer said. “At Heritage Square, you really had to work to find them.”

Instead of dropping off and picking up passengers at the lots on Como Avenue, buses will continue on to the University of Minnesota Transitway, then north to the new transit hub. There, fairgoers will pass under a restored historic arch as they enter the grounds.

“In the past, Como Avenue tended to get backed up both ways on busy days,” Hammer said. “By not having buses maneuvering around and then people having to cross Como, it should really smooth things out.”

For now, the park-and-ride buses that drop fairgoers off at Snelling Avenue and Midway Parkway will continue to do so.

To simplify the process of getting visitors arriving by car through the Larpenteur or Hoyt avenue entrances, each driver will be charged only for parking. Once on the grounds, the car’s occupants will then pay for admission at new ticket gates.

The gate at West Dan Patch/Commonwealth Avenue will be closed to all but service vehicles. Pedestrians arriving from the west will be directed to enter the fairgrounds at Buford Avenue and continue on to the new admission gate at the transit hub. Fairgoers on foot can also enter at the Canfield Street gate on Como Avenue across from the fire station.

Signs at Cleveland and Commonwealth avenues will direct vehicles to enter on either Larpenteur or Hoyt avenues. Only service vehicles and pedestrians will be able to enter the fairground parking lot at Buford Avenue.

Overall, Hammer conceded that there are a lot of unknowns when it comes to predicting how everything’s going to work, so traffic cones and temporary signage will be in place for a while.

The West End Market, transit hub and related improvements are budgeted at $16 million, $12 million of which is being financed by fair board-issued bonds and the rest from operating income. 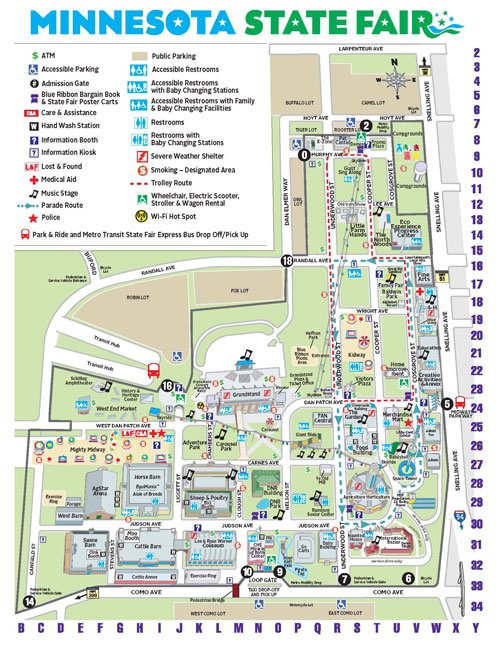 This map shows the West End Market and transportation hub in the northwest side of the fairgrounds.