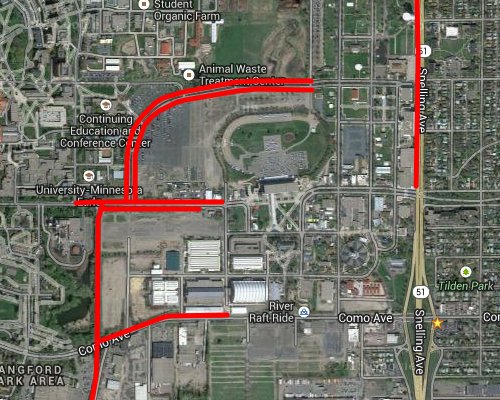 For Streets.mn’s “Our Fair State” series during the Minnesota State Fair, I don’t really have a good story to tell about an out-state event. I do, however, live less than a mile from the State Fairgrounds and wanted to share a little of what this heavily pedestrian-oriented event is like to be around the other 353 days of the year.

One of the most surprising things, considering how the fair itself is known for its huge crowds of people doing that seemingly unnatural thing of walking, is that the fairgrounds is missing some sizable chunks of sidewalks around its periphery. Some roads, such as Randall Avenue and Commonwealth Avenue which are on the University of Minnesota Side, aren’t major through streets, so may not really need sidewalks, but the busy Como Avenue and even busier Snelling Avenue really should see some improvements made.

The missing sidewalk on the north side of Como Avenue between Liggett Street and the University of Minnesota Transitway is mostly just an annoyance since there is still a grassy area to walk on. The lack of a sidewalk on the Snelling Avenue side of the fairgrounds north of Dan Patch Avenue/Midway Parkway is far more dangerous—Snelling Avenue through there is signed at 40 miles per hour, and a lot of traffic goes much faster than that.

Up there, the fence surrounding the fairgrounds directly abuts the roadway near Arlington Avenue, meaning that anyone who attempts to walk along the west side of the road will find themselves walking right in a stream of high-speed traffic. Sadly, there’s no real reason to have the fence jut out at that point, other than perhaps to protect a natural gas line. There is enough empty space for a sidewalk along the entire stretch, though retaining the trees and lamp posts may be a challenge. Perhaps an alternative such as hanging plants would be a good alternative to trees in some spots.

When a sidewalk finally does get added on the west side of Snelling, there will still be a problem that Snelling Avenue itself is a busy roadway and hard to cross. But it’s possible to take advantage of the fact that northbound traffic can’t turn left anywhere between Dan Patch Avenue and Hoyt Avenue and add some pedestrian refuge islands on the south sides of intersections along the road.

Improvements are planned for Snelling Avenue, though a recent intermodal study of the corridor had the northern study area end right at Dan Patch Avenue. For the Snelling “A Line” enhanced bus service being planned, there is a conspicuously large gap between stations right by the fairgrounds—largely because of the missing sidewalk on the west side.

But for the most part, I’ve seen the fairgrounds as being a pretty decent part of the neighborhood. After this year, the transit center is moving from its spot on Como Avenue up to the current Heritage Square area. I’m curious what the plans are for the vacated space, since it could be a nice place to develop. Are there any changes you’d like to see around the fairgrounds to make it a better place when the fair isn’t going on?

At top: Some of the notable sidewalk gaps around the Minnesota State Fair.