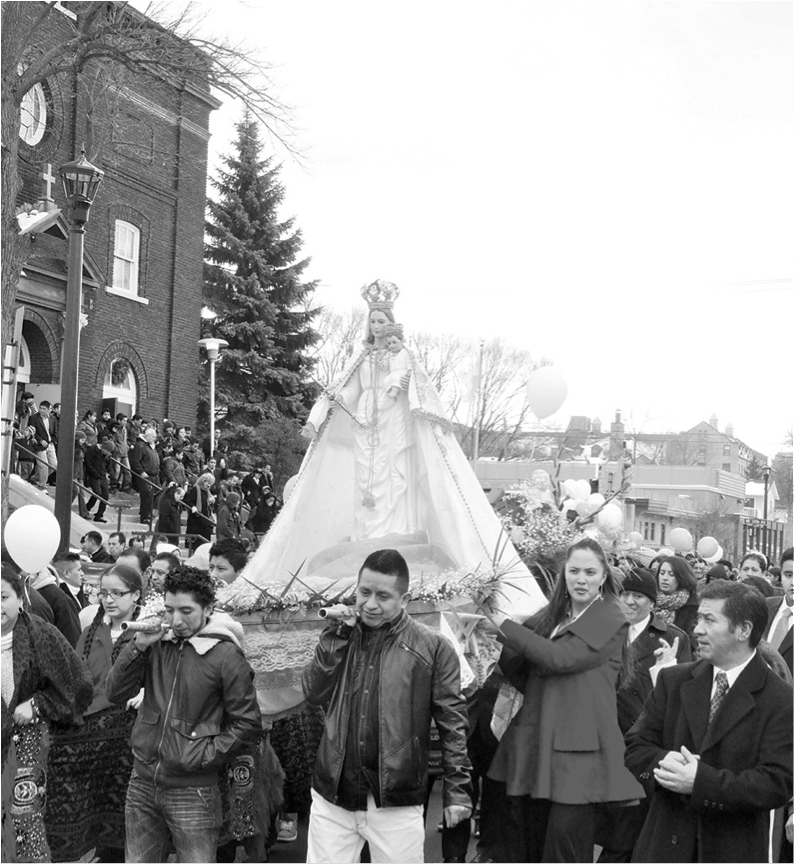 A vision in the clouds and hope of a better life has rooted hundreds of Ecuadorians in NE Minneapolis.

On New Year’s Day Ecuadorians packed the Church of St. Cyril and Methodius for the Our Lady of the Cloud celebration. With Christmas lights strung from the lights and singing Spanish-language hymns and clapping, the Catholic congregation marked the 15th observance at the church of the believed miracle in Ecuador of the appearance of the figure of Mary in the clouds seen as revealing a special love.

The celebration included a procession with a figure of Mary and infant son carried aloft on a flower-bedecked platform. But something of a cultural fusion, too, could be seen in the clothing of some of the smallest congregates, snug in Spider Man snowsuits.

“Minneapolis is a wonderful area, because there’s been a place for all the new immigrants. And these (Ecuadorians) are the newcomers,” Rev. Edison Galarza, of the Missionary Oblates of the Sacred Hearts, said.

Born in Ecuador, Galarza has been serving at St. Cyril and Methodius on 2nd Street N.E. – a church originally made up almost entirely of Slovak Catholics – for more than a decade.

The majority of the families in the church are Spanish speaking. According to the church, the Ecuadorian community is the largest in the congregation.

“I think the majority of them (Spanish speaking) come from Northeast and Columbia Heights,” Galarza said.

The exact number of Ecuadorians in Minneapolis is not known.

But Ecuadorian Consul Silvia Ontaneda Andrade, who oversees a busy office located on East Hennepin, indicated she believes the number is much higher.

Officials in the past have estimated the population, a difficult thing to ascertain as the contingent who are illegal immigrants are not eager to raise their hands, at 15,000 to 20,000 Ecuadorians living in the metro.

But Andrade indicated the actual number could be as high as 40,000. And an organizer with the Ecuadorian Independence Day celebration also estimated the same high-end number.

Andrade sees the region enriched by the newcomers from the small country nestled on the northwest coast of South America.

“You guys (Minnesota), with respect to the rest of the world, have the best of the Ecuadorian migration,” Andrade said.

Economic instability in Ecuador in past decades sparked waves of migration from Ecuador to Spain, the United States, and other countries, Andrade said.

The largest population of Ecuadorians in the United States is on the East Coast.

Many of the Ecuadorians arriving in the United States over the past years formerly were farmers in Ecuador. The bad economy particularly hard hit the countryside, Andrade said.

“They are incredibly talented,” she said of the newcomers. Minnesota employers give Ecuadorian workers rave reviews in terms of work ethic and loyalty, Andrade explained.

“They don’t keep track of hours,” she said of the driving work ethic. Newly arriving Ecuadorians often find work within scant hours of arrival, she said.

“They will come and the very next day they will get a job,” Andrade said.

That’s because the newcomers often have family and friends advocating for them at their places of work.

While many Ecuadorians work in the service industry, an entrepreneurial streak can be seen in such businesses as the Ecuadorian Express, a local taxi cab company on Central Avenue.

There are also area Ecuadorian restaurants.

In a sense the Ecuadorian immigrants didn’t bring a lot of baggage, Galarza explained.

Ecuador, in general, is a content country, he explained. The people have good values. There’s no legacy of the gang violence plaguing other South American countries such as Columbia, a country where Galarza, in the days of the reign of drug kingpin Pablo Escobar, served as a young priest.

Northeast Minneapolis resident Luis Chiqui, a radio personality on La Picosa KQSP 1530 AM, a radio station with a Latin beat, also views a work ethic honed by the rigors of agricultural as telltale of Ecuadorian immigrants.

“We have a culture where you don’t complain,” Chiqui said, sitting comfortably recently at the controls of the station located in Golden Valley while Ecuadorian music played on-air.

“You don’t whine. You came here to work, and that’s what you do,” said Chiqui, whose family has rural Ecuadorian roots.

Born in Ecuador, Chiqui grew up in New York City. He remembers arriving in Minneapolis during a snow storm, a delightful arrival for someone who likes to ski.

The Chiqui family’s move to Minnesota from New York City isn’t unusual. Many Ecuadorians in Minnesota lived for a time on the East Coast – upper Manhattan was one stronghold, Galarza said.

Indeed, the Our Lady of the Cloud celebration at Church of St. Cyril and Methodius was originally prompted by former New York City Ecuadorians, according to a church history.

Besides Mary being seen as special to Ecuador, she is also seen as patroness of immigrants.

One reason many Ecuadorians left places like New York City for Minnesota is jobs, Chiqui believes. The competition is not so “fierce” in Minnesota as on the East Coast, he said.

Galarza, too, thinks quality of life is attracting Ecuadorians to Minnesota. For one thing, Ecuadorians are keen on education and the state is known for having good schools. A high percentage of Ecuadorian high school students go on to colleges and universities, he said.

They don’t want the kind of jobs their parents have, Galarza said.

“That’s normal,” he said of the ambitions of the young.

Not that young Ecuadorians want to jettison their culture.

“I love this country. I am an American citizen,” said Chiqui, who attended Brown College and has an Ecuadorian music radio program along with other broadcast duties at KQSP.

“But Ecuador is where I was born, and I still love the culture,” he said.

Some of the liveliness of Ecuadorian culture has been transfused into Minnesota. Galarza, for instance, notes the vibrant Catholicism practice by Ecuadorians, the Spanish influence of taking the religion out of the church and into the street in the form of processions.

Although hundreds attended the Our Lady of the Cloud celebration on New Year’s Day, the largest and perhaps most colorful procession occurs at Christmas, Galarza explained.

Although most Ecuadorians in Minnesota speak Spanish – Spanish language services at Church of St. Cyril and Methodius date back some 20 years – indigenous Ecuadorians speak Quichua, the language of the Inca Empire.

There are Quichua-speaking Ecuadorians living in Minnesota.

Galarza views the Ecuadorian population in Minnesota as stabilizing. Ecuador, that has a population of about 15 million, has been enjoying a better economy in recent years.

But it is an economy also tied to energy production. And oil prices worldwide have been falling, Galarza noted.

Its capital, Quito, is a worldwide heritage site, famed for having some of the finest preserved colonial architecture in Latin America. 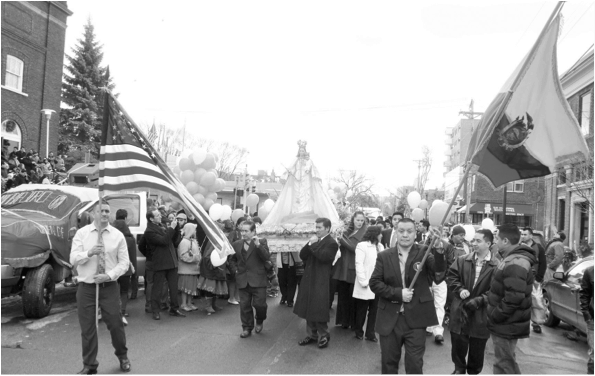 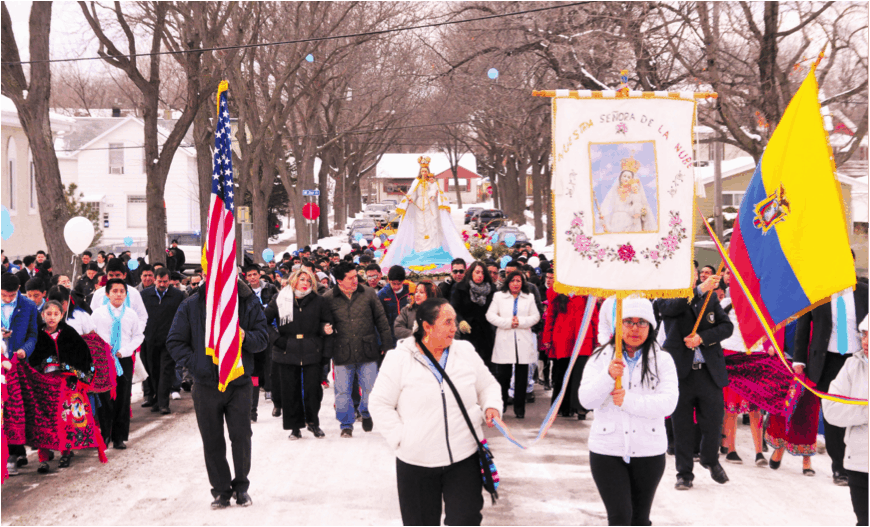 Above and top photo, scenes from the Nuestra Señora de la Nube, Our Lady of the Cloud, procession through the neighborhood near the Church of St. Cyril and Methodius on New Year’s Day. The Ecuador flag flies with the American. Below, Luis Chiqui of Northeast at his KQSP controls. (Photos by Tim Budig) 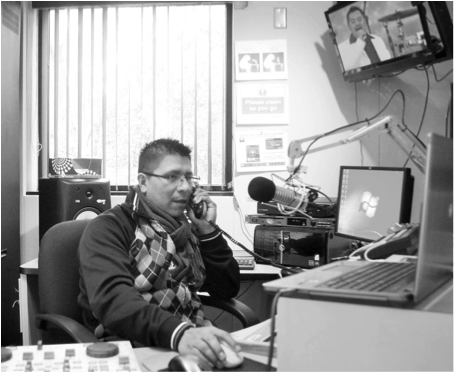