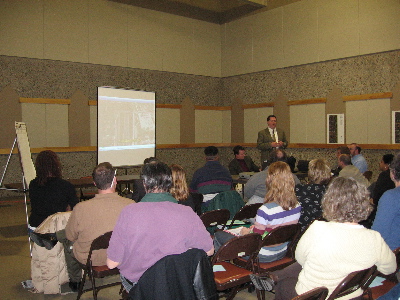 MnDOT and other agency officials faced a skeptical crowd at Monday's meeting on the 35W BRT plan.

More than a hundred people attended a meeting Monday evening in Kingfield Park to hear about a proposed Bus Rapid Transit line on 35W. Several elected officials introduced representatives from the Metropolitan Council and the Minnesota Department of Transportation who showed a simulation of highway expansion on the the Crosstown and 35W and a simulation of a bus rapid transit station at 46th street.

During the question and answer period the audience showed little enthusiasm for the plan. Some in the audience were veterans of community battles with MnDOT over highway expansion and suspected that MnDOT was offering BRT as sugar-coating for the bitter pill of additional car lanes on the highway.

While the meeting had been billed as an opportunity to learn about transit “options”, the mayor’s point person on transportation issues, Peter Wagenius, explained that BRT was the only transit mode being considered.

Nacho Diaz, Director of Transportation services for the Met Council, said he expected very little transit-oriented development along 35W. He also said the Met Council wanted to “preserve the character of the neighborhoods” along 35W.

State Representative Karen Clark expressed concern that the new bus lanes, which would also be used as high occupancy vehicle (HOV) lanes, would create more capacity and lead to increased congestion heading to the Downtown Commons.

Ward 6 Council Member Robert Lilligren pointed out how planning for highway expansion on 35W had been segmented into separate projects encouraged citizens to get involved with the planning for BRT, which he believed would help connect the divided segments into one project.

It was announced that the name of the segment from 46th Street to the Downtown Commons had been changed from the 35W Access Project to the 35W Improvement Project.

More public meetings are scheduled about BRT on 35W, but few in the audience seemed interested. After the phenomenal success of the Hiawatha light rail transit line, it seems that elected officials, MnDOT, and the Met Council are going to have a tough time selling BRT.