To be fair to the Star Tribune, they didn’t screw up nearly as much as KSTP. In fact, the egregious mistake was in the headline, “140 voters used single mailbox”. This wasn’t asserted in the article. However, reporters don’t write the headlines, and the Star Tribune did at some point replace that headline on the web version. They’re unfortunately stuck with it in the print edition. It’s a screw up because even Brian Rice and KSTP never asserted 140 people registered using one mailbox. They rented mailboxes from the same mailbox rental business. Yes, quite a bit different.

The Star Tribune writers talked to some people who registered using their mailbox instead of a residence — take note KSTP, because that’s what real reporters do — and got statements from more people than just the one guy making the accusation. The Star Tribune debunked — albeit inadvertently it appears since they didn’t point out the contradiction — the crux of the KSTP story, that there was a “coordinated effort” to commit voter fraud. “State records show that 419 Cedar Avenue S. has been used by some of the voters as far back as 2008.” Maybe Brian Rice believes people started registering back in 2008 to help Mohamud Noor run for state representative in 2014?

That said, some things were left out. And there was some silliness.

The most glaring omission was an explanation that illegal voting isn’t enough for voter fraud. Fraud requires intent. Mistakes don’t cut it. Registering with your permanent rather than current address is on the same scale as voting in multiple parties on your primary ballot. Yes, you’ve broken the law, but the punishment is merely having your ballot invalidated. You don’t go to jail.

The Star Tribune didn’t explain that the voter registration form doesn’t explain the law about using your current address. Under the field for your address is another for where to send mail if you can’t receive mail where you live. That might imply you shouldn’t use your permanent address, but for a new voter, especially voters for whom English is as second language and Minnesota elections are unfamiliar, expecting them to pick up on the implication is unreasonable. Seems like a simple thing to point out that a mistake like that isn’t fraud. 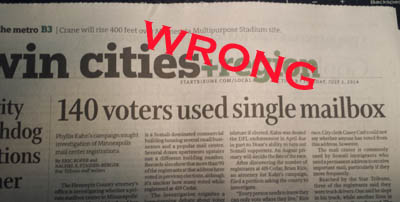 Something left out that would have detracted from the sensationalism of the story (I would expect that to be a big downer for KSTP TV, but I expect better from the Star Tribune) is to point out how ludicrous it is that any sort of “coordinated effort” would be done this way. If you’re going to register people en masse with an invalid address, wouldn’t you bring them to the polls on election day so their ballots could be mixed in with the valid ones? Not only does voting absentee provide a chance to detect and stop the fraud, but voting on the first day maximizes the time for detection; in this case, a month and a half before election day. That’s a peculiar sort of fraud. Seems like a con man asking for your money, but not for a month and a half so you can check the story and nourish second thoughts.

And now for the silliness. The Star Tribune reporters went for a quote to Dan McGrath of Minnesota Majority, the local professional voter fraud fraudsters, infamous for sending law enforcement on wild goose chases checking groundless allegations. There’s no indication McGrath has any knowledge of this case, yet someone at the Star Tribune thought they still needed the opinion of an uninformed person with a history of being consistently wrong. This seems like writing a story about an increase in carbon dioxide levels, confirmed by all the climatologists taking measurements, yet seeking comment from some science denier crank who just doesn’t believe it.

They also brought in MNGOP attorney general candidate Sen. Scott Newman for a bit of blather:

“There is a side of me that is kind of chuckling,” Sen. Scott Newman, R-Hutchinson, said Monday. Newman sponsored the failed constitutional amendment that would have required voters to present photo ID at the polls. “This particular story lends credence to what some of us have tried to accomplish.”

Anyone want to tell Newman that even using the wrong address, people still look like their photos? And matching a wrong address wouldn’t help? He’s still pushing photo ID, even when it wouldn’t stop this at all. Photo ID can stop only impersonation, which is common as shark attacks on dry land. No one is charging impersonation here.

The Star Tribune didn’t play up the story for sensationalism like KSTP TV, but fell short in terms of asking skeptical questions about claims. They did at least dig around to gather some facts. KSTP TV merely seems pleased with itself that it broke a story, and the lack of any real story seems not to bother them. Thus how credulous media sustain the myth of voter fraud.