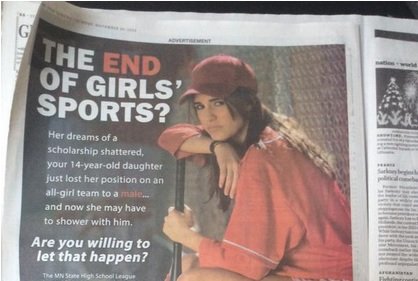 The Minnesota Child Protection League is at it again. The anti-LGBTQ organization paid for a second full-page anti-transgender ad in the Star Tribune’s Sunday paper this week. The ad comes as the Minnesota State High School League reconsiders this week whether or not to allow transgender high school students to participate in athletics based on their gender identity.

“The end of girls’ sports?” reads the ad in bold letters at the top. “Her dreams of a scholarship shattered, your 14-year-old daughter just lost her position on an all-girl team to a male … and now she may have to shower with him. Are you willing to let that happen?”

The MPCL published an anti-transgender ad in the Star Tribune last September, just before an October vote by MSHSL to allow transgender students to play sports based on their gender identity.

However, MSHSL decided to table that decision because of significant pressure from opposition, and postponed the vote until Dec. 4.

Both ads have drawn major heat from the transgender community and civil rights advocates for the misleading fashion MPCL is portraying transgender people and the issue at hand.

Many voiced their outrage on Twitter, including NBC Sports writer Aaron Gleeman. 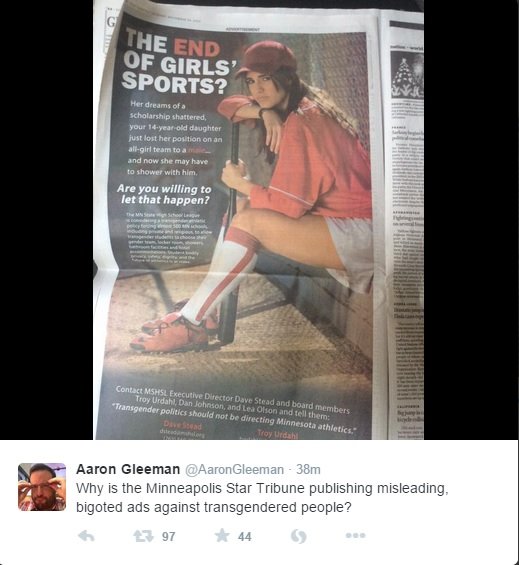 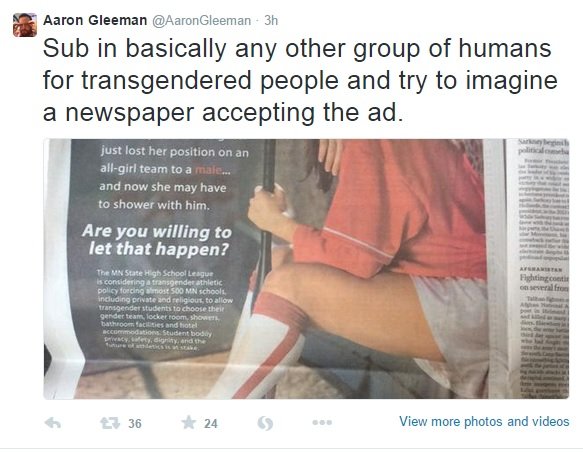 Some Twitter users said that the photo in the ad is actually a stock photo, not a 14-year-old girl.

Others said the ad marginalizes the feelings and privacy rights of transgender people.

But, fortunately for us, Twitter user the hella raddest made sure to point out maybe one of the most misleading parts of the ad.