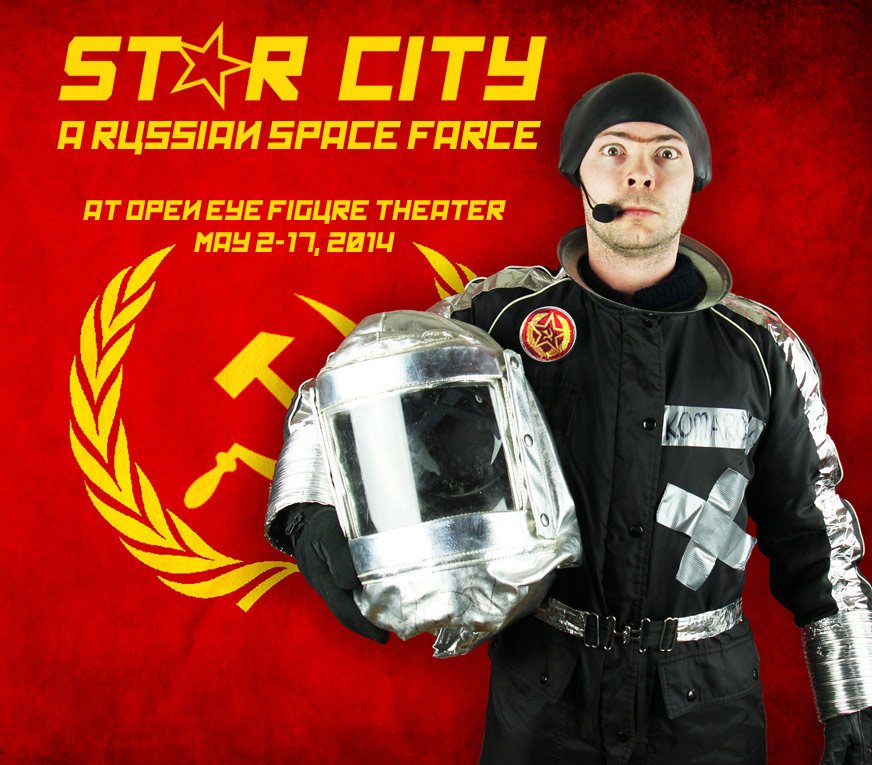 CAVEAT: I have a passing familiarity with many members of the company, but have not worked extensively with them.

SHOW TITLE: Star City: A Russian Space Farce
PRODUCER: Four Humors
SHOW DESCRIPTION: Welcome to Star City… the top secret Cosmonaut Training Center that stands in the middle of Kazakhstan tundra. Here the bravest, smartest and brightest will prepare for the ultimate human endeavor: space exploration! We may not have the most expensive equipment or the most knowledgable Nazi Rocket Scientists or specifically stated safety protocol like those boasters at NASA, but we do possess one thing they do not: sheer Russian determination. So strap in… or are you a nation hating capitalist?

…this quote isn’t just a solid one-liner, it’s pretty much the mission statement for this show. I found this to be a both a good thing and a bad thing, for my viewing experience.

The subtitle is in no way misleading: this is classic, dictionary-definition farce, with rapid-fire, wildly improbable plot twists, running in and out of slamming doors, and rapid costume changes. The four actors play seventeen roles between them (according to the programme — I wouldn’t trust myself to be able to accurately track that from memory). Being expected to flip between so many characters, it’s no wonder they chose to play them so broadly, with exaggerated, over-the-top tics and mannerisms.

This is one of the things that initially caused me to pull back when they charged onto the stage, silly voices and wacky physicalities ahoy: I found it aggressive to the point of neediness, enough so that I’ll sheepishly confess that I hunkered down in my chair a bit and strapped in for what I was afraid was going to be a painfully unfunny show by some of the finest comic talent in the Twin Cities. I like me some zany just fine — I’m a rabid Marx Brothers fan — but I rarely find that zany by itself equals funny, and what I was seeing was less Groucho and more Jerry Lewis, and producing much the same response in me: a recognition of comic skill that I just can’t respond to.

I’m pleased to say that the show did eventually break my initial defenses, as it did exactly what farce does so well and piled one ludicrous contrivance on top of another until I couldn’t stop myself from cackling, agog at the sheer nonsense of it all. I could just rattle off the lines I found satisfying (“Space dog! Noooooo!” ranks highly), but I must make special mention of the show’s inspired use of multimedia, in the form of a pair of screens that (due to some “faulty” wiring) cut between a variety of comic situations at suitably inappropriate moments.

(And, spoilers, for those who care about such things, so skip to the next paragraph if you do, but the appearance of a missing and long-sought-after dog on the space shuttle that had been launched some time ago was a perfect illustration of tight plotting: there were simply so many different plot threads and character agendas going on that we completely forgot that that was even a possibility.)

If the setting implies any kind of political satire, it is (in my view, mercifully) drowned out by the slapstick — enough so that I found the production’s attempts to reach towards some kind of poignancy near the ending to be halfhearted, when a character expresses subdued dismay at the fact that their shenanigans have cost a bystander his life. (I actually would have found it both funnier and sharper if nobody cared.)

Ultimately, I found the show to be kind of hit-and-miss: hits were definitely more than fifty percent, but close enough to fifty percent to give me cause to squirm for some uncomfortable stretches. And I can’t help but play the writer’s game in my mind, looking for some different approaches that might have made it easier going for me.

1) the characters were played so broadly that perhaps some kind of intermediary figure between us and them would helped? I suspect that this is the role that Matt Spring’s character was meant to play, but he took the absurdity so amicably, and was absorbed by it so rapidly, that he became a part of the ensemble in an eyeblink.

2) the script seemed to take a lot of time to introduce us to the world, to the characters, to the rules — enough so that I had the impression that fifteen minutes (of a seventy-minute show!) passed before much in the way of meaningful plot began to happen. I get the desire to carefully set up all those dominoes in front of us so we’re satisfied by watching them fall, but I wonder if it wouldn’t have been more effective to kick off with the General’s arrival and let us learn as we go. That said, I opened this whole thing by complaining about feeling overwhelmed at the top of the show, so maybe this would have agitated rather than mitigated my alienation.

3) in a show as joke-heavy as this one, I get the temptation to go down the rabbit-hole of developing character schtick. But in a seventeen-character ensemble, I don’t think our attention is being held by the individual characters so much as the increasingly complex conflict between their agendas. The faster things were moving, the better a time I was having, and I suspect that a solid 10-20 minutes could be chopped off this show without a thing being lost.

I seem to have once again written a review dissecting a mostly funny show in such a way that it seems like I hated it. The fact is that I was enjoying myself most of the time; it’s just a lot more interesting to pick apart the times that I wasn’t.

TL;DR: I found it uneven, but funny enough often enough. You should see it.