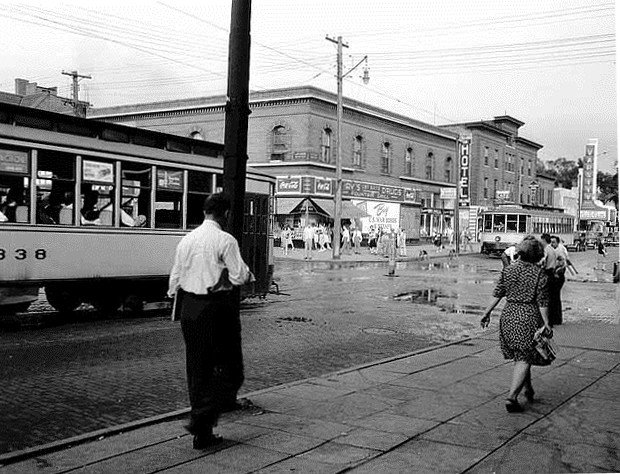 Homeowners favor, landlords oppose, and business owners appear mixed on whether portions Dinkytown should be declared a historic district in the four blocks across University Avenue from the original entrance to the University of Minnesota in Southeast Minneapolis. Their debate is over the “Dinkytown Historic District Designation Study” written by Minneapolis planners that will be considered by the city’s Heritage Preservation Commission on June 9 and by the City Council, probably in July. The HPC’s public hearing will be at 4:30 p.m. Tuesday, June 9, in Room 317, Minneapolis City Hall.

Principal city planner Haila Maze presented the report to the board of the Marcy-Holmes Neighborhood Association on May 19, which voted unanimously to support historic designation of the district, and to the Dinkytown Business Alliance on May 21, which rejected the idea after much discussion.

In February 2014, the HPC imposed a moratorium on development in Dinkytown pending a study to determine whether some of the area is historically significant and worthy of preservation. The city’s Community Planning & Economic Development (CPED) posted its study and solicited public input from April 20 through May 25 . Additional comments may be still submitted to be included with the appendices. 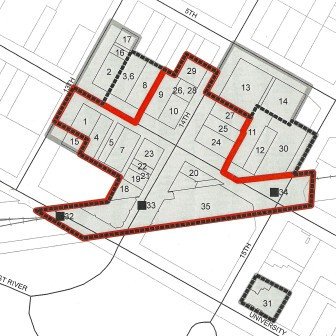 The gray area shows the properties considered for a Dinkytown heritage preservation district and the red line outlines a smaller district based on the streetcar era.

Maze distributed a map listing 35 properties studied that could contribute to the social and cultural history of Dinkytown, which grew up with the University, and a smaller section of one- to three-story buildings that fit a theme around the original horse-drawn and later electric streetcars that began in the 19th century and ended in 1954.

Historic resources still standing from “the streetcar commercial district” from 1899 through the 1940s include 21 structures, most which were built between 1900 and 1929. Even though the bridges have changed, the Dinkytown historic value also comes from what remains of rail lines, bridges, views of downtown, and the trench dug for the first rail lines connecting Minneapolis and St. Paul, possibly as far back as 1862.

Another historic Dinkytown theme over the years has been the University’s presence and its social and cultural history, including significant music and social protest, the report says, adding that ”the people that have called this place home, shopped in and operated its stores, and attended the adjacent university have created memories and added their own stories to the district’s history. … Many define it as an area that is ‘funky’ and ‘eclectic’ and there is a strong desire to preserve that feeling.”

Heritage preservation is not about individual buildings. Historical designation of individual buildings is a federal honor that can be used to support grant requests, but it contains no local rules on development. The designation of a heritage preservation district, by contrast, creates guidelines that building owners and developers must follow to change the exterior of their buildings.

Jack Byers, manager of long-range planning for Minneapolis CPED, explained the process to both meetings last week, saying most exterior changes in heritage districts merely require administrative approval. Major changes and demolition, however, would have to be approved by the Heritage Preservation Commission, he said, adding that demolition is rarely allowed within a preservation district.

Some DBA members, including Kristen Eide-Tollefson, of the Book House, have sought heritage designation and building guidelines at the same time, so property owners would understand the consequences of the district before approving it.

Byers said the City Council will not approve the use of more planning department time unless they know a preservation district would result. But, he added, planners would work then collaboratively with the stakeholders to develop guidelines.

Eight DBA members favored, two opposed and one abstained on the motion that condemned the idea of heritage preservation for Dinkytown.

Randal Gast, owner of Qdoba Mexican Grill, abstained, saying he could not support heritage preservation without knowing the guidelines that building owners would need to follow. Dinkytown is currently classified as an “activity center” in the city’s long-range plan, indicating that the city endorses intensive activity and development in the area.

Some Marcy-Holmes leaders have worried that failure to create some protection for Dinkytown will result in intensive development like that in Stadium Village on the east side of the campus along the Green Line and near the TCF Bank Stadium. Tall buildings have replaced smaller-scale businesses in much of the area near the intersection of Oak and Washington.

“Commercial-retail sites are underrepresented as historic landmarks in Minneapolis,” the CPED report says. “Currently only seven of the 170-plus landmarks in the City of Minneapolis relate specifically to neighborhood commercial retail. Of those designated, all are individual landmarks and none are part of a district.”

Marcy-Holmes already has three historic districts: the St. Anthony Falls Historic District designated for its relationship to the origins of Minneapolis; the Fifth Street Historic District, a residential area with some of the earliest homes in the city; and University of Minnesota Greek Letter Chapter House Historic District that honors buildings that that have a social and economic character dependent on but separate from the University.

Dinkytown is much like the Greek district that tells “a very different story than the economic and social life of an actual city commercial neighborhood,” the report says.

“[T]he social and cultural history of Dinkytown is perhaps more representative of the experiences of the ‘everyday person,’ at least more so than the rarified world of fraternities and sororities,” the plan says.

Several Dinkytown buildings have “ghost signs” that reveal some of their history.

Curt Martinson, director of business development for Doran companies opposed the heritage designation. His company has a demolition permit pending the outcome of the preservation debate. If the area is not approved, Doran can demolish the cinder-block building at 1315 Fourth St. S.E. that houses a coffee shop and clinic.

Doran received his demolition permit when he planned to build a hotel along Fourth Street between 13th and 14th avenues. The City Council denied a permit to demolish the one-story brick building at 1319‐1325 Fourth St. S.E. that houses Mesa Pizza and Camdi restaurant.

Although Doran has said he no longer plans to build a Dinkytown hotel, Council Member Jacob Frey said another developer is interested in doing so. Frey supports the concept of building taller buildings using the street-level façades of historic buildings.

Eide-Tollefson pointed out that Dinkytown meets five of the seven required characteristics to qualify as a heritage preservation district. She has created Preserve Historic Dinkytown as an archive to collect Dinkytown stories.

She attacked the idea that Dinkytown preservation is “baby-boomer nostalgia” and said young people have recently become engaged with Dinkytown’s history, in part through Al Milgrom’s film, “The Dinkytown Uprising,” premiered at the MSP International Film Festival and has received several week-long extensions of its run. The film is currently showing at the St. Anthony Main theater at 1:20 p.m. daily through June 4.

After the hearing, the HPC will recommend to the City Council on whether Dinkytown should become a heritage preservation district. The Council’s Zoning and Planning Committee will then consider it and pass its recommendation to the full council. Byers said the Z&P committee may or may not have a hearing on the issue.