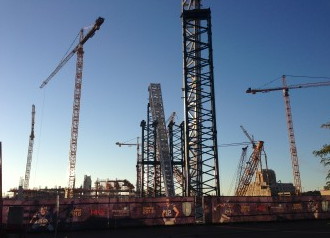 It has been a while since we have talked about what is supposed to be the greatest employment story in the history of Minnesota: the new Vikings stadium, with its price tag of over a billion dollars and thousands of jobs.

Black leaders are as corrupt as White leaders. Not the kind of integration and equality we were looking for. There is no training/employment miracle for African Americans, no statistical data to support it. It is a lie.

Are you as troubled as I am that neither Commissioner Kevin Lindsay nor Diversity Director Alex Tittle can produce any real numbers to support the success story narrative of people of color employed on the Vikings Stadium?

Remember Sports Authority President Ted Mondale admitting it also, then, in an open meeting, asking me “to give us a chance” on the Vikings stadium? The chance? For Whites. See our column archives to read of the bogus, cooked numbers of this continuing travesty.

Sources within organized labor confirm the Vikings stadium employment fraud being perpetrated on communities of color. The person inside the Minneapolis Civil Rights Department responsible for cooking the numbers is part of the team of three individuals who provided the same type of bogus information and documentation to the Public Safety Committee of the Minneapolis City Council two weeks ago.

In the case of Twins ballpark, it was a $300K rip off, money that did not lead to trained African American hires. In the case of the Vikings Stadium it will be in excess of that number, as, once again, the African American community will be short-changed jobs from training by their leaders and lack of legislature oversight.

Why won’t the human rights director, the director of the Council on Black Minnesotans, and the two co-chairs of the legislative committee overseeing compliance regarding stadium legislation regarding African American employment fight providing false information in bogus documents containing bogus numbers? Why does this remain the modus operandi of “liberal” Minnesota? Why the continued uncontested confirmation of corruption and mismanagement, as reported in the April 17, 2009, “Community Participation Program Update?”

As a Black newspaper, we understand that too often unless a White newspaper says it is factual, Black people and Black columnists have no standing in the matter, a terrible truth to have to tell about this supposedly great liberal enclave of Minnesota. But it has been a fact for all of our lifetimes that as long as it’s only Black people being hurt, Minnesota liberals are okay with it.

Out of over 1,200 people that worked in the construction of the Twins stadium, the African American community was allowed less than 40 workers. That’s a sad and frightening commentary. Being marginalized and dismissed as a race on the Vikings stadium continues business as usual.