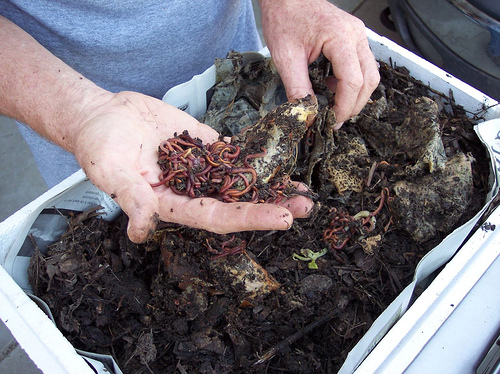 Eisenia fetida is having a fine winter in the University of Saint Thomas greenhouse. The worms, commonly called red wigglers, are housed in bins, on beds of coffee grounds. It’s part of a food-waste recycling demonstration overseen by biology professor, Dr. Chester Wilson.

Pigs have dibs on most university cafeteria leftovers. Thanks to Ramsey County’s Food to Animals program, a healthy share of all school lunch toss-outs are diverted to feeding swine. With hefty taxes heaped on hauling costs, reducing garbage volume helps school bottom-lines.

Porkers do have their epicurean limits. Hogs don’t do coffee. University students drink a lot of it. At Beakers, the café in Owens Science Hall, Dr. Wilson saw grounds just being dumped in the trash.

Red wigglers aren’t picky. The Latin word “fetida” means lover of damp places. They wriggle up to the top when a layer of grounds is added to the vermiculture trays. What’s left behind is extremely rich soil.

Students are involved from start to finish. They collect about a dozen gallons of grounds a week — that’s about two tall kitchen garbage cans. Four to six weeks later, the worms have turned it. The vermicompost is ready. Harvesting soil from worms isn’t easy. Getting each and every little crawler out of the dirt is harder than you’d think.

Mixed 50/50 with standard potting soil, the compost will be ready for the student garden this spring. The vegetables students grow will go to a South Saint Paul food shelf. Who knows, it could end up in a carrot stick in the school lunch trash a year or so hence, all harkening back to those little red wigglers, in their nice bed of grounds, enjoying this winter in the Owens Science Building greenhouse.