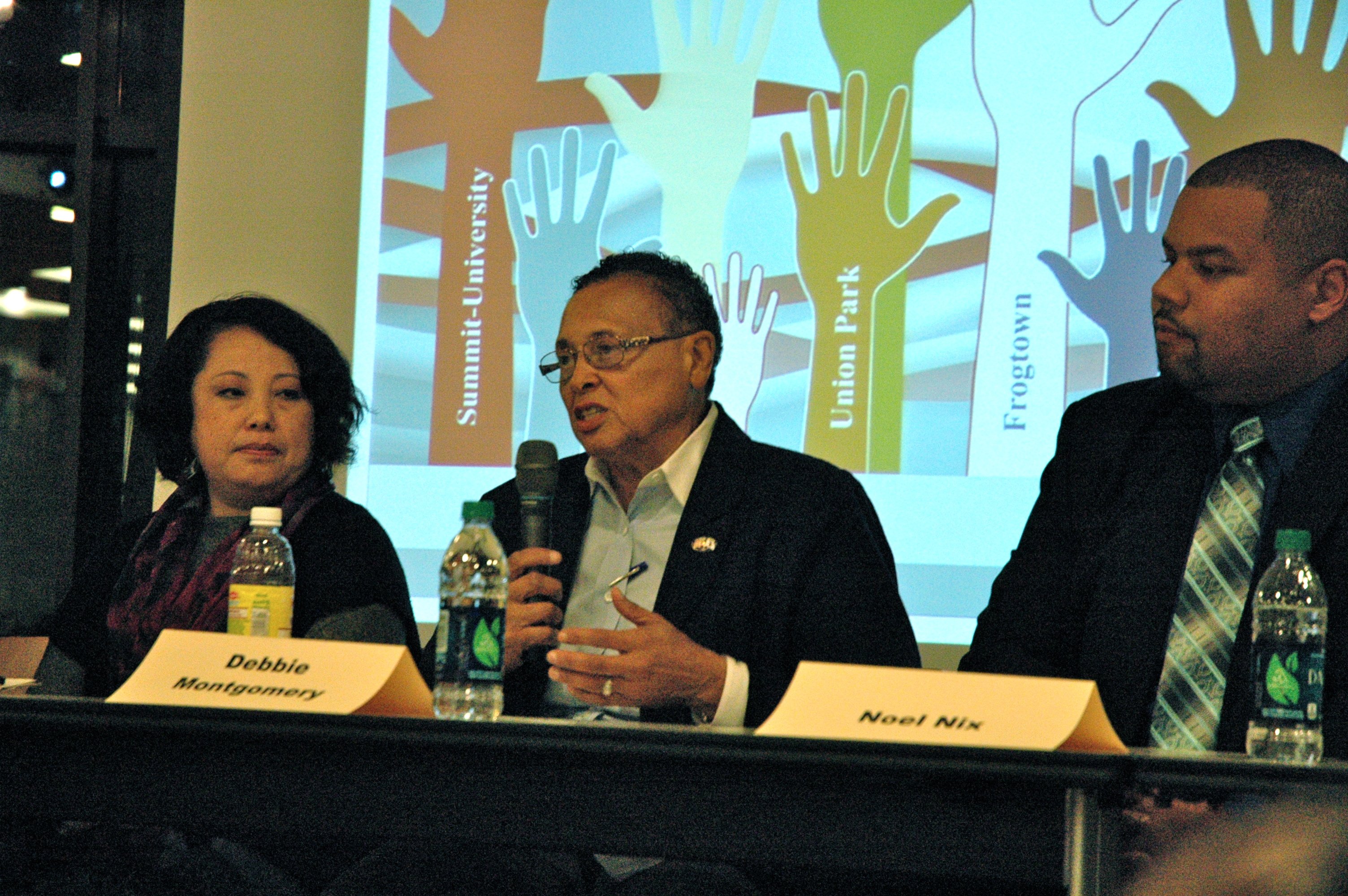 Kazoua Kong-Thao, Debbie Montgomery and Noel Nix are among the candidates hoping to win the Ward One St Paul City Council Seat

A diverse mix of seven candidates, many of whom have backgrounds in community organizing, faced off in a forum Tuesday night at the Wilder Center, sparring for a chance to fill the Ward One City Council seat vacated by Melvin Carter III when he resigned to take a post in the Minnesota Department of Education last July. Among the candidates in the forum hosted by The League of Women Voters were former City Council member and St. Paul’s first female police officer Debbie Montgomery (she was knocked off the council by Carter in 2007), and Carter’s former council aide, Noel Nix. Other candidates included former St. Paul School Board Chair Kazoua Kong-Thao, Johnny Howard, founder of the Thomas-Dale Block Clubs, Dai Thao, an IT Manager, poet and contributor to Hmong Times, and Mark Voerding, past president of the District 7 Planning Council and aide to former council member Bill Wilson, plus Paul Holmgren, who has been endorsed by the St. Paul GOP City Committee.

Former NAACP head Nathaniel Khaliq has been filling the Ward One seat on an appointed basis while the city waits for the election to pick a permanent replacement for Carter. None of the candidates in the crowded field carry DFL endorsement, although most are Democrats and candidate Howard has the Green Party’s endorsement. Nix and Thao have various labor and community endorsements between them and Kong-Thao has the support of the Minnesota Women’s Political Caucus and several state representatives and senators.

With Tuesday’s election coming under the rules of Ranked Choice Voting, the candidates were asked who they’d vote for if their own name wasn’t on the ballot, with Debbie Montgomery winning the most number of mentions, followed by Johnny Howard and Mark Voerding. Dai Thao said the person he’d vote for, Matt Hill, is out of the race, to which Noel Nix responded that since Hill has endorsed him, he’d take that vote. Montgomery herself declined to name a candidate she’d vote for, but said cultural competency — one of the hallmarks of Kazoua Kong-Thao’s campaign — would be a key factor in her decision.

St Paul’s Ward One straddles the Green Line light rail project, which will begin running next year, from Snelling Avenue in the Midway area to the area around the state Capitol. (See a map of Ward One here).It includes some of the poorest and most diverse parts of the city and traditionally, it has provided an important platform for a minority voice on the city council. The election contest has prompted widespread interest and speculation as to what role Ranked Choice Voting will play in the final outcome.

One of the issues the candidates addressed was about St. Paul’s Promise Neighborhoods. Two of the candidates, Dai Thao and Kazoua Kong-Thao, spoke of the importance of continuing the promise of the program, even if the resources aren’t there from the federal and state government. “We need to make sure that we have multiple plans,” said Kong-Thao. “If we promise something, how are we going to deliver?”

Noel Nix and Debbie Montgomery, meanwhile, spoke about what’s happening with Ward One families affected by the prolonged recession and job shortages, and the importance of developing relationships with community nonprofits. “A lot of these families are stressed,” Montgomery said. “We got to get them the resources so (children) can come to school with a free and clear mind.”

Paul Holmgren, Johnny Howard and Mark Voerding spoke about improving all city schools, not just those in the Promise Neighborhood. Holmgren said that parents were the key part of the equation, and that he wants to give them school vouchers and tutition grants, with Voerding saying that family intervention with community nurses and early childhood education are essential to get kids off to the right start.

All of the candidates except Holmgren promised to support an ordinance that would require banks to release data about foreclosure loan modifications that would be available for the public to view, with Nix and Howard saying this is something they’ve worked for in the past, and Voerding chastising current leaders for not having done this already.

Kong-Thao supported the measure with a caveat that such information be available for people of all cultures to read. Dai Thao said he supported the measure but knew there would be push-back, so the ward needed a leader who could bring organizations and unions together. Paul Holmgren disagreed with the language, saying he worried that f it is too restrictive, “We’ll lose the banks altogether and we won’t be able to go to those resources.”

All the candidates seemed hopeful about the economic opportunity and jobs that will come with light rail, and many of the candidates — including Howard and Montgomery — said they had advocated during the process for the communities and businesses along the corridor. For example, Montgomery was influential in getting Metro Transit to add three neighborhood train stops on University Avenue that originally were not in the plan.

“Too many times plans come to our neighborhood. The ideas should come from the neighborhood,” Howard said. Dai Thao also said the ward needs to connect to West Metro transit, but “It doesn’t come out of our pocket,” he said.

The candidates also weighed in on how to close economic gaps. Howard and Montgomery said gaps can be closed with job training. Voerding stressed ways for people to get a living wage, and also said transit was key to the equation, so people can get to and from work. He also talked about the need for building networks and having mentors help young people.

Dai Thao and Kazoua Kong-Thao both made connections between poverty and the education gap. “To close the economic gap, we need to make sure our families have access to education,” Kong-Thao said, who argued that we need to build financial literacy in order to build power in the community.

Noel Nix stressed his experience working with Urban Homeworks, Goodwill Easter Seals and the Frogtown Neighborhood Association, and said the ward needs to build small businesses so that “then they’ll have the means to hire within the community.”

Paul Holmgren had the last word for the evening in his closing remarks, saying his dream is to empower the people. “Programs don’t empower the people. Programs enslave people. My dream is that you are free to do what you want to do.” He added that he wants to see his house worth more than his mortgage someday.

“We need to dream of gaining a better place to live.”