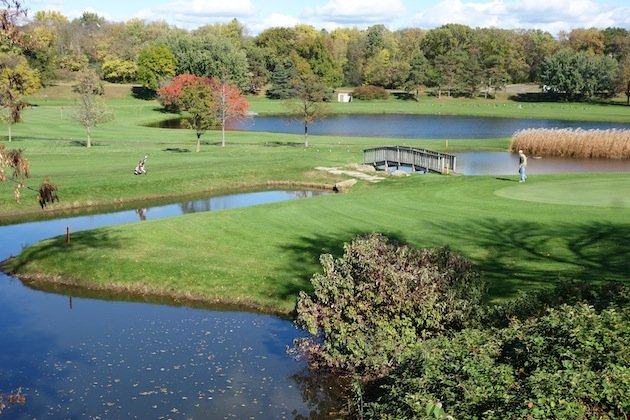 All photos by Jack Steinmann

The fate of two of St. Paul golf courses was debated for nearly two hours in city council chambers on October 23. The simple question of whether or not to give the Parks and Recreation Department authorization to solicit private contractors to operate two of the city-owned golf courses, Como and Phalen, appeared to deadlock the council. In the end, the council reluctantly agreed to lay the matter over for two weeks, allowing more time to examine a draft of the  Request for Proposals (RFP).

The timeline is tight. Mike Hahm, director of Parks and Recreation, explained to the council that the resolution would authorize his department to go ahead in its plan to seek new management for the course’s 2014 season. The plan would begin immediately with the release of the RFP. This would be accompanied by community engagement sessions over the next couple of months so that he could return to the council in January with contracts for consideration. Failure to act now would result in another $600,000 to million dollar deficit for the city’s golf program next year. That’s a tight timeline for new management since the golf leagues typically get organized in February.

The timing of the RFP seems rushed (the announcement that the city council would vote on it hit the newspapers less than a week ago) but the fate of the golf courses, along with the entire parks and recreation system, has been under discussion for some time. Mayor Chris Coleman’s 2007 budget speech proposed addressing deficits by consolidating parks and recreation services and “partnering” with outside organizations to run sites and programs.

The 2008 St. Paul Parks and Recreation Vision Plan initiated a process of transition based on a “quality over quantity” approach. The discomfort and rancor at the city council meeting on Wednesday was just the latest in an ongoing series of often painful changes as city neighborhoods see a number of their recreation centers close or move to private management contracts. The quality of these changes is often a subject for debate.

While members of the men’s and women’s golf clubs at Como I spoke with expressed relief that at least the city does not plan to close golf at their site, there is concern that programs will not be the same. Parks and Recreation has to deal with lack of support for change and an increasing lack of trust in the process that at times seems oddly rushed and lacking in transparency.

This was apparent at Wednesday’s city council meeting, which set an urgent push for fiscal responsibility and change against the question of why the programs couldn’t remain under city management. Across the city, some are fighting for their ward’s parks and rec programs, and against the luxury of having golf courses in other wards. The debate pitted golf course against golf course, as Highland was examined for its complex set of bonds and large debt.

Council members brought up questions about the terms of the contract: would employees be paid fair rates, how would the city’s investment in grounds equipment be transferred and would access and affordability for city residents be guaranteed? The biggest sticking point was the difficulty of moving ahead with this change without a more detailed presentation on how the finances would improve. Councilperson Thune observed that, “The math doesn’t seem right,” and the transfer of public employees away from the program didn’t seem to amount to a million dollars worth of savings.

Como Park’s golf course is also home to a number of winter activities including cross country ski trails and the popular Alpine sports program that offers ski and snowboard activities, December through February. While Hahm assured the council that the winter programming would continue, the details on how that might be affected by a private management contract for the golf course were lacking. [Full disclosure: I work as a seasonal Alpine ski instructor at Mount Como.]

Hahm explained that those details would emerge from responses to the RFP. Thune argued that once the vote was made to release the RFP, the process would move forward. Thune asked for the two week layover noting that the way the vote was being framed seemed “wrong and unfair.” He felt that there was really no choice to vote against because it would be viewed as robbing other city programs of a million dollars. Lantry challenged Thune to just go ahead and vote for it. He refused saying, “You’re releasing the RFP because there will be a contract and I just don’t like getting jobbed like that.”

At an October 18 beer and pizza gathering, members of Como Golf Course’s Men’s League celebrated the end of the season. Plaques were handed out and Mike Hahm and Suzie Odegaard, Special Services Manager, were welcomed to say a few words. Club president Tom Dapper announced the news that the city was preparing to issue an RFP so that private management could take over running the golf course in the near future. In opening remarks Hahm noted, “In a perfect world, we would have communicated earlier.”

A year earlier, the club had made public its opposition to funding for a study to explore other uses for the golf course and “the implicit decision” to close the course. The news that golf would continue but under new management was met with guarded optimism. Many of the golfers I spoke with have been playing at Como for years. Few can match Chuck McCurdy who has been a Men’s Club member since 1955. He’s seen a few changes in his time. He remembers the course before its big remodel in the 1980s when it had a small green and a lot of blind shots. His opinion of proposed changes? “Could be a good thing,” he said.

The city council voted 5 to 1 for a two-week layover. The council will take up the resolution again at the November 6 meeting.

Como Golf course is known for its hills.

Chuck McCurdy has been playing at Como since 1955.