Deborah Montgomery’s longtime mentoring and community leadership will be formally recognized later this year. The International Association of Women Police (IAWP) in April selected Montgomery, a 28-year veteran St. Paul police officer (1975-2003), for its 2013 Heritage Award and will honor her at their annual training conference September 21-26 in Durban, South Africa.

The award is given to an individual with “substantial and significant contributions to women police,” wrote St. Paul Board President Angie Holt in her congratulations letter to Montgomery. Speaking exclusively to the MSR last week, Montgomery said that Holt told her she had been nominated by several people.

“It was a fluke,” recalled Montgomery, who holds a master’s degree in urban planning, on what led her to the capital city’s police department, which at the time had less than five Blacks and was sued in 1971 by the NAACP for not hiring more Blacks. “I was doing administrative planning and budgeting out of the mayor’s office” when top City officials urged her to apply after a judge ruled that the City needed to hire at least 10 Blacks among 50 new hires.

“I was the only woman who passed [the written test],” continued Montgomery, “and only eight men scored higher than I did in the combined test,” which included a physical agility test. “They offered me the job, but I actually turned it down because it was a $10,000-a-year cut in pay. 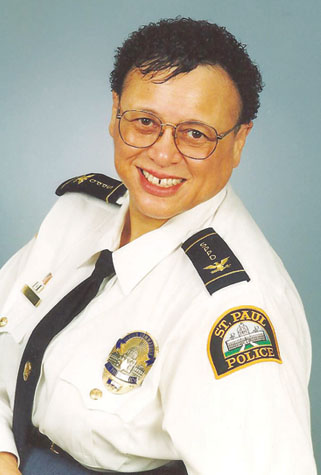 “But the Friday before the academy was going to start, one of the 10 African American men who did accept the job decided to drop out.” After assurances from the mayor, Montgomery changed her mind and spent the weekend in hurried preparations.

“They [tried] to fit me into a man’s uniform…and they [were] adding pieces to it because women have a little bit of butt, and men don’t. Then I had to wear men shoes because they didn’t have any women shoes at the time. And my hat — I looked like Clarabell the Clown,” said Montgomery, smiling.

At the academy, Montgomery dealt with inequity issues: “I had to share a locker room with 21 men — they didn’t [have] a women’s locker room or bathroom.” She also struggled in marksmanship: “The one thing I couldn’t do was shoot a gun.”

She almost quit to “[go] back to my job” in the mayor’s office but decided, “I’m going to stay in here for the 21 weeks so that they don’t think that women couldn’t do this job,” said Montgomery, who practiced shooting on her lunch breaks and eventually qualified in every area of her training.

“It didn’t become an ego thing for me. If I would’ve quit, they would have said, ‘I told you a woman couldn’t do this job.’”

After that, Montgomery learned the job from field-training officers. “I had some [for whom] anything I did was wrong, but I had others who would actually take the time and say, ‘No, you did this wrong,’ and [who would] tell you how to do stuff,” she recalled.

“Before I came on the job, they had a height requirement that you have to be six-feet tall, but they had to get rid of [it] because it was discriminatory against women and minorities. I didn’t get to drive the majority of my 36 weeks of field training because the guys wouldn’t let me drive because they were going to be uncomfortable” due to her 5’6” height. The police cars were designed for taller persons. “All I [got] to do is write reports,” she said.

“It was hard in the beginning,” Montgomery admitted. “They put me on Rice Street, which at the time had the highest crime in the city, and every car had two men in it. But they put me in a one-person car on midnights. I had some battles, but I held my own.”

Looking back without regrets, Montgomery pointed out, “I was the first female [police officer] who happens to be Black, but I probably was the worst thing that could’ve happened to the department. Not only was I Black, but I also was a woman, and they had no women. I’ve trained women in Russia, China, Australia. I’ve been blessed to see other cultures and other women and the things they go through.”

Come this fall Montgomery will be recognized by her peers. “This is an award that is not handed out every year,” she said proudly. “My dedication [has been] to training women both nationally and internationally and being a mentor to them and helping the field of law enforcement grow overall.

“It’s been a journey. It’s never been about me but always about my community and the people I worked for. I’ve been a public servant my whole life.”