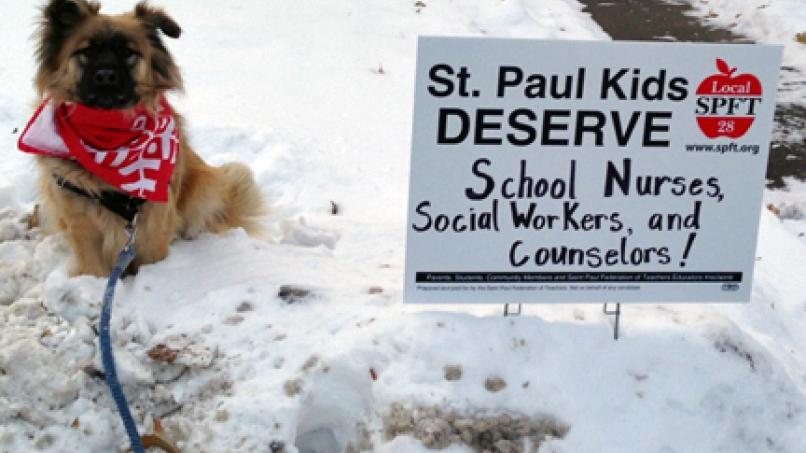 Lawn signs in support of the SPFT’s contract campaign are popping up across the city.

For the first time in the current round of contract talks with the St. Paul Federation of Teachers, negotiators for the St. Paul Public Schools agreed to put two key issues for teachers – class sizes and specialist staffing – on the table.

Although the district’s proposal did not draw a favorable response from SPFT’s negotiations team, it does indicate the district heard loud and clear the message delivered by community members who signed onto a petition supporting the union’s effort to make issues like staffing and class sizes part of the contract talks.

“We are now where we hoped we would have been at the beginning of these negotiations,” SPFT organizer Paul Rohlfing said. “We believe that it was the strong support of the community, that we were able to bring 4,000 signatures on our petition to the school board, that caused the district to agree these issues should be on the table.

“Now we need to get the district to a place where they’re making progress and ensuring the classroom conditions St. Paul students deserve.”

The district presented teachers with a “package proposal” that includes staffing and class-size language during closed-door talks with a state mediator Dec. 11.

It was a far cry, however, from what St. Paul teachers are seeking when it comes to educating “the whole child.” The union has laid out staffing proposals for a wide range of professionals – including nurses, counselors and librarians – in an effort to guarantee students have access to the academic and social services they need to be successful.

The pilot program also lacks teeth, teachers said. While it would ensure language in the contract that addresses class size, it would bar the union from filing grievances if the district violates that language – leaving enforcement up to management.

The two sides will meet again Jan. 7, and teachers are making plans to mobilize members and community supporters in a public showing of support later this month. Monitor www.spft.org for details.

“It is our goal to take action in the month of January to show the district and the school board we’re serious about making progress,” Rohlfing said.