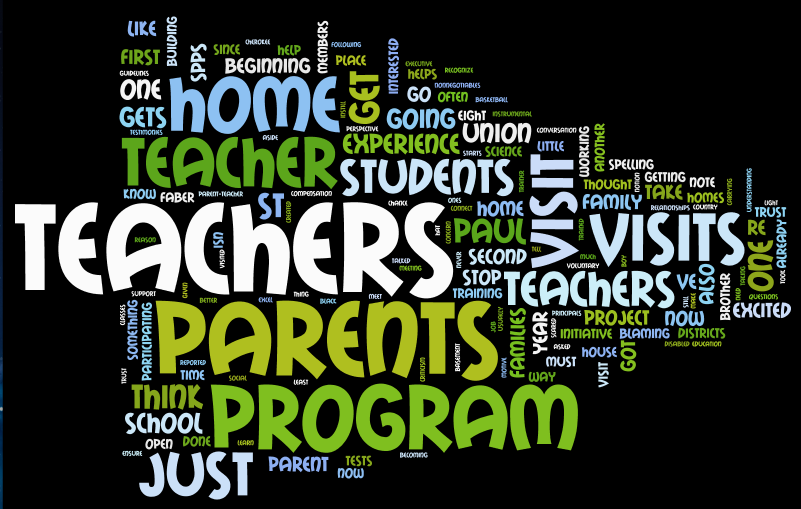 Since beginning with seven teachers in 2010, the St. Paul Parent-Teacher Home Visit Project has grown to include teachers at more than 40 schools and 150 families during the school year just ending. Teachers working in the St. Paul School District will end on a positive note that not only students, but also countless parents can attest to.

The program officially launched in 2010, when Nick Faber, then a science teacher at John A. Johnson Elementary learned about a home visit program taking place in Sacramento.  Then there were 11 states participating. Now, there are several districts in 15 states carrying out the initiative — St. Paul’s project being the only one implemented by members of the teacher’s union.

“At the time I brought it to my principals’ boss and said, ‘I think this is pretty powerful, I think we should be doing this,’” said Faber, now a science teacher and home visit program trainer at Cherokee Heights Elementary.

Julianne Hinchcliffe, trainer and social worker at Paul & Sheila Wellstone Elementary was on the union’s executive board when Faber asked to bring the program to SPPS. She was also one of the first to volunteer and there’s no doubt about how sincere she is about the visits; she’s changed her official job title to ‘school mom.’

“As a school social worker I’ve been doing home visits since I first started with SPPS, but it usually was a reactive home visit. — there was probably already a concern,” Hinchcliffe said.

This program, however, has a different motive. One reason the project was quickly given the green light by SPPS officials and administrators was due to criticism of both teachers and parents.

Teachers were supportive from the beginning. “We’ve never had a problem getting support from the union,” Faber said.

Before the program took off, members of the teacher’s union created a proposal for home visit teachers to receive compensation.  That’s all been squared away.

“They worked it out so that there would be a stipend for teachers who went out and did these visits. We’re starting to get that critical mass that we have in other districts across the country,” he said.

How the Home Visit Works

Teachers visit homes in pairs. On the first visit, teachers learn about the family. The second visit —  following in-school parent-teacher conferences — is a follow-up.

There’s no formality to the meeting other than getting a grasp on what parents are looking for from teachers, what their perspective of education is — and most importantly, how they can help their child excel. The two-per-family teacher home visits take place once in the spring, another in the fall.

Jones believes the program should continue, and teachers and parents, whether interested or not, should at least try the experience.

Hopes and Dreams — and Trust

Ida Lee Hurvitz, a first-through-third grade Crossroads Montessori teacher agrees.  Now in her second year in the program, she says the initiative helps to better understand what goes on in the daily lives of students and their families.

“I love doing these home visits, it’s been a very enriching experience for me,” said Hurvitz.

One of eight participating teachers at her school, Hurvitz alone has done more than 20 home visits. Each time she gets just as excited as the students who peek out of the window to make sure their daytime parental figures show up to meet their real ones.

“It’s just been a very relaxing, warm environment. It’s things like just being at the house with the parents watching a little boy help his baby brother take off his t-shirt and then go downstairs to the basement to play a little basketball,” Hurvitz continued recalling her observations.

“I didn’t realize how important spelling tests were. There was one home where they had all the spelling tests up on the refrigerator and once he gets so many 100s, he gets a hat!” Hurvitz said with a laugh.

One of her most memorable visits was one where she discovered that two of her students were siblings to a disabled brother.

“Then you get an understanding as to why the kids are tardy. It’s not their fault, it’s just the circumstances that are going on in the house,” Hurvitz said.

Since the project’s beginning with just eight trained teachers, to now with more than 250, the St. Paul Federation of Teachers has been instrumental in ensuring the program’s run. Though in addition to their assistance, trainers still go over guidelines and “nonnegotiables” with interested staff. Teacher-home visits are voluntary. If a teacher does decide to participate in the program, they must go with another teacher to both ensure safety and to be a second point of contact for families. Teachers are also required to attend training and after the visit, share their experience. And again, they must be compensated for work done outside of the classroom.

This year Faber says he’s encouraged teachers to recognize the importance of diversity.  He says parents and the neighborhood take note when visits seem targeted at one type of family, or student.

“Then it starts to become not about building relationships, rather the community gets the notion that this is about fixing them,” Faber said.

To prevent such notions he’s assured teachers that the program isn’t about visiting specifically parents of high-achievers or low-achievers — and it isn’t about singling out black, white nor Latino students. Aside from the cross-section of classes and cultures, Faber encourages teachers to visit homes of parents they already have a relationship with. This helps to instill the underlining program attribute; trust.

“I think the best thing now is the parent testimonies. We’re building a network of parents who have had home visits. One of the parents came to speak at a training to tell about her experience and what it meant to her children. That is the greatest way to get teachers excited about it,” Hinchcliffe added.

She often pops in the classrooms of students she’s visited at home. They’re more than often excited to spread the news to their teachers and other students, which sparks more interest and participation in the program.

“Teachers truly want to connect with parents. We’ve talked for years about parent engagement and parent involvement,” Hinchcliffe said.  “This is just a really authentic way to do it. It’s becoming more widely accepted, like this is just something that we do in St. Paul.”