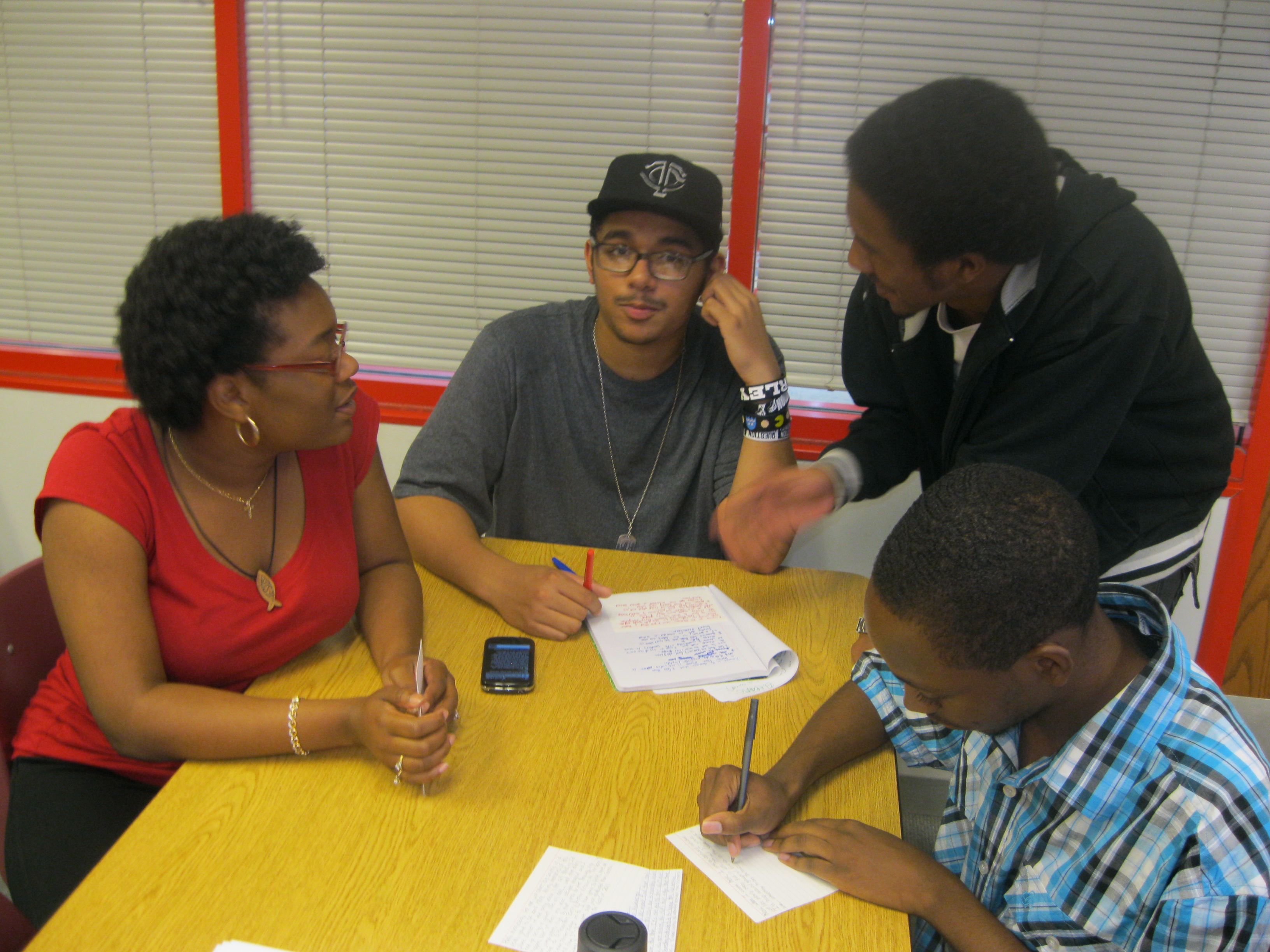 REVISED AND REPUBLISHED – January 16, 2012 | Recent graduates from St. Paul’s Central High School have created an interactive multi-media workshop about one thing they think is missing from the debate about the achievement gap — the voices of students themselves. Spearheading this workshop is Central High’s theater teacher, Jan Mandell, who is currently the District Arts Literacy Coach for St. Paul Public Schools (SPPS.) Mandell, who has taught in SPPS for 33 years, also heads the Central Touring Theatre, which has created and performed plays on many socially significant issues for three decades, reaching tens of thousands of people.

The educational achievement gap between whites and students of color is getting larger and teachers are in the hot seat about how to solve this problem. “Getting students into the conversation with teachers and administrators is where we can begin to understand some of the deeper issues around the disparity in achievement.  We can learn so much more by hearing their perspective” according to Ms. Mandell.

Many programs address the achievement gap, but “Achieving within the Gap” is different, growing from the experiences and insights of students themselves. It started from AVID, the Advancement Via Individual Determination program that prepares middle and high school students for college.

Six years ago, Dr. Darlene Fry was hired by the St. Paul Public Schools to bring the AVID program to the district. At that time, there were hardly any African American males in this program. Some African American males were performing at the top of their academic class, but most were performing at the bottom. Wanting to get to the roots of this problem, Dr. Fry asked Mandell to look at some of the national statistics and district data about African American males relating to prison, high school detention and graduation rates and then show these statistics to her students in the Central Touring Theatre to create a play addressing the core reasons behind this problem.

Students were depressed by the statistics, made all the more personal because some were about their brothers, relatives, and even themselves. Instead of creating a play, the students wanted to start a weekly support group to address the achievement gap. This was the beginning of Seeds of Change, a weekly mentoring, tutoring, and support group for African American male teens and their allies (girls and people of other races) at Central High School. An empowering component to this group was a dedicated effort to use theatre as a tool for personal and social change.

Out of this program started an African American Male Initiative class (AAMI) dedicated to eliminating the achievement gap. This daily all-African-male class started last year with all freshmen and is currently in its second year at Central High with a new freshman class as well.

While teachers were doing grade checks within Seeds of Change two years ago, they noticed the student’s grades were all over the board, and they asked them why they were doing well in some classes and not others.  Overwhelmingly, the students responded they were doing well in the classes where the teacher “respected” them.  Wanting to clarify this important issue, the Seeds of Change students were asked the following question:  “How do you know when you walk into a class that the space is safe and the teacher respects you?”  The students were videotaped answering this question, and the idea of the workshop emanated from this video.  Excerpts from the video are included in the workshop as well as the student’s perspectives on how to make classrooms, curriculum, and instruction more engaging.

More than 30 workshops have been given to SPPS personnel. Student alumni of Central High and its Seeds of Change program lead the workshop and incorporate the very elements that are important to students of color in reducing the achievement gap. Four important themes were addressed in making classrooms and curriculums more successful: respect, building community, incorporating movement, and making it meaningful.

At the core of what African American male students want in any classroom is respect from their teacher. Atlese Robinson, a lead presenter in the 10th grade AAMI class, said, “This is about people paying attention to their actions, what they’re saying to people, and how it affects somebody. If you come off as disrespectful, it’s emotionally hurtful, and it makes it hard to learn the material at hand.” Respect also comes from understanding the pervasive structural inequalities in our society and institutionalized racism.  While racism is pervasive in our school system and society, “Talking about racism and what it carries is emotional,” said Atlese. “There’s a fear of going to that place.”

Building community is also important. Creating an atmosphere where students get to know each other and their teacher makes learning more meaningful. John Ochalla, a Central High graduate and workshop presenter, echoing the voices of many students, said, “I would like more of a community because I’ll have more experiences, and I’ll remember the curriculum and the work better.” According to Atlese, it’s a shame that, “I had classes that lasted all year long, and I only got to know the three people sitting next to me. Sitting down all day is boring.”

Students of color would find the curriculum more engaging if it was more inclusive, and they could “see themselves in the curriculum,” said Atlese.  In most history and English classes, the curriculum places a lot of emphasis on the contributions of white men.  “Including African American writers and people in your curriculum not only shows respect, but a true sense of knowledge,” said Atlese.  “Two-thirds of our world isn’t white.”

As a follow-up to the workshop this past November, Michelle and Barack Obama Service Elementary School, Ramsey Middle School, and Central High implemented an honoring project in their AAMI classes. For one to two days a week, Central High alumni work with teachers to create curriculum, teach, and facilitate group work in AAMI classes at these schools.  Alumni use the arts and theatre to build community and get students writing and moving to engage with text on a physical and emotional level. At the end of February, African-American male students at these three schools will make tribute to honor African American men in their community.  A dinner will be held on their behalf, and presentations made by students using a variety of arts/media.

What impact would the student alumni/workshop presenters like this workshop to have on school personnel?  Per G’Alexander Berry, Central High 2011 alumnus and workshop presenter, “this is about raising awareness; getting people to be conscious of their actions and how they say things, and being mindful of how they’re affecting other humans.”  Participants hope this will be a learning tool for school staff to improve their own curriculum, instruction, and communication.  Ultimately, they want this to be the beginning of an ongoing dialogue of how to eliminate this gap with the most critical voices of the students being honored as well as heard.

CORRECTION: A reader called to our attention an apparent error in this article. After looking into this, inaccuracies were discovered. These related mainly to the characterization and description of the AAMI classes. The article has been rewritten and expanded with additional information.