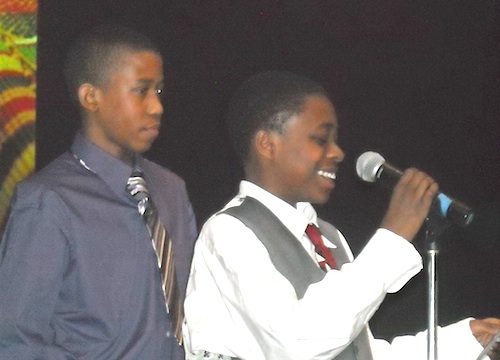 On February 23, several hundred people, including family members, school teachers, principals, administrators and school board personnel, came together at Travelers Insurance Company in St. Paul to celebrate the Honoring Project and the accomplishments of African American male students at three St. Paul schools. Four African American Male Initiative (AAMI) classes at Obama Elementary, Ramsey Middle School, and Central High School started the Honoring Project by studying notable African American poets and then writing their own poems and stories.  The dinner was the culmination of this four-month project.

Some of the students began in November by reading and discussing “My People” by Langston Hughes and then creating their own poems.  A line from each of their poems was incorporated into one large poem called “Our Collective Voice.”

Elementary, middle school, and high school students went on stage with their respective classes and individually recited their own written poems or stories.  Fathers and father figures, mothers, grandmothers, grandfathers, brothers, uncles, cousins, coaches, mentors, spiritual leaders and teachers were lauded with heart-felt praise and respect for advice given, lessons learned, enjoyable time spent together, and for being good role models.

The Honoring Project grew out of a St. Paul Public Schools program called Achieving within the Gap, which addresses the achievement gap between white students and students of color.  More than 30 workshops were presented to metro area schools in the last year to address this issue.