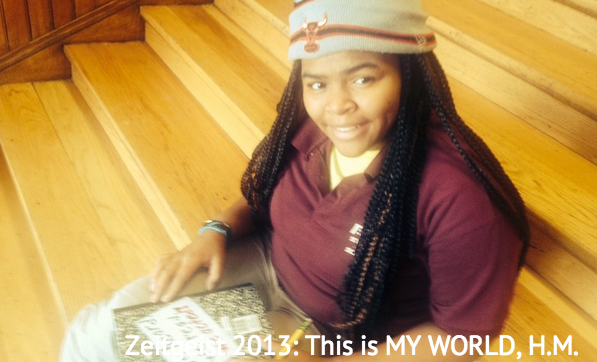 Heneeya Myrick, a seventh-grade student at St. Paul City School, won Public Broadcasting System‘s national Zeitgist contest with her story of the world news in 2013. She responded to the PBS call to students around the country to “submit a digital mix of their Zeitgeist using the storytelling tool Meograph to show us what their 2013 looked like.” Myrick’s video appears below.

According to Nancy Dana, the executive director of St. Paul City School, Joe Nathan passed the PBS call along to the school:

They didn’t have much time, but put together the project in two days. Heneeya Myrick’s Zeitgeist project was based on a journal that she kept as part of her social studies classs, a requirement for sixth, seventh and eighth grade students at St. Paul City School. Other contestants from around the country included high school students, but Myrick’s entry stood out above the rest.

CORRECTION 12/26/2013: The contest was sponsored by Public Broadcasting System, not, as I originally and mistakenly wrote, NPR.
– Mary Turck