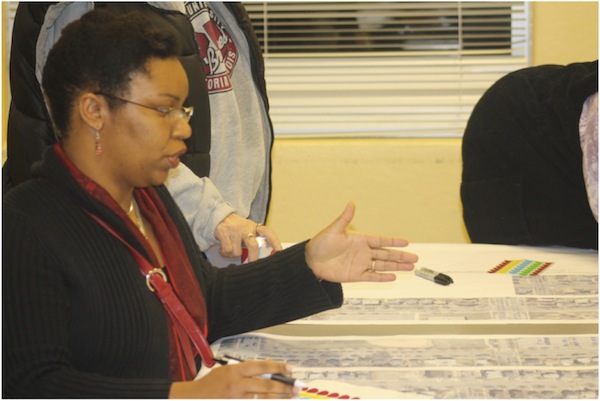 Marshall Avenue, which runs from the St. Paul Cathedral to the Mississippi River, brought 70 people to the Oxford Community Center on April 10 to voice their opinions about traffic, safety, convenience and possible changes to the avenue.

Some participants voiced concerns about insufficient room for buses or trucks to pass without moving into bicycle lanes. Another issue cited during the meeting was a risk for bike riders in the bicycle lane running into parked cars, while speeding vehicles pass by on the left side.

Theresa Nix, a St. Paul resident, expressed concern about safety, and particularly about traffic speed, pedestrian crossings and ease of parking. She said that addressing these three concerns “will make Marshall Avenue a safe, open and friendly street.”

City engineers sought recommendations of how the street can work better for all users: pedestrians, drivers, bikers and those on wheelchairs.

“On Marshall Avenue, there are about 20,000 cars a day on the way down by the Mississippi River,” said Assistant City Engineer Paul St. Martin. “By the time [the traffic] gets to the Cathedral of St. Paul, it’s about between 1200 and 1700 cars.”

Some homeowners called for a broader street to decrease traffic congestion. Business owners asked for ways for customers to get to their businesses on Marshall Avenue without traffic difficulties.

Bicyclists and walkers asked for bike- and pedestrian-friendly improvements to Marshall Avenue, including pedestrian refuge islands, marked crosswalks, bicycle boulevard markings, and including gardening and urban agriculture on medians.

Others said they saw no issues with the street, expressing disapproval of the new changes to Marshall Avenue. One participant said the roads are already safer, and that improvements would only lead to more tax increases.

“I live on the street across from Central High School,” said Karen Randall, who has been a resident for 18 years. “I deal with the traffic [even though] it’s not such a big deal because it’s restricted amount of time; it’s not all day long you have to deal with that.”

Randall said she’s concerned about the suggestion of putting median in front of the school and what that will do to the width of the street.

“I’d like to see what design comes up about the width of the median and how you can still have a couple buses going down the road,” Randall said. She added that she thinks a street median will bring problems for buses.

Officials said they will review the recommendations and hold another public meeting in May. The Marshall Avenue improvement project is in an early stage.