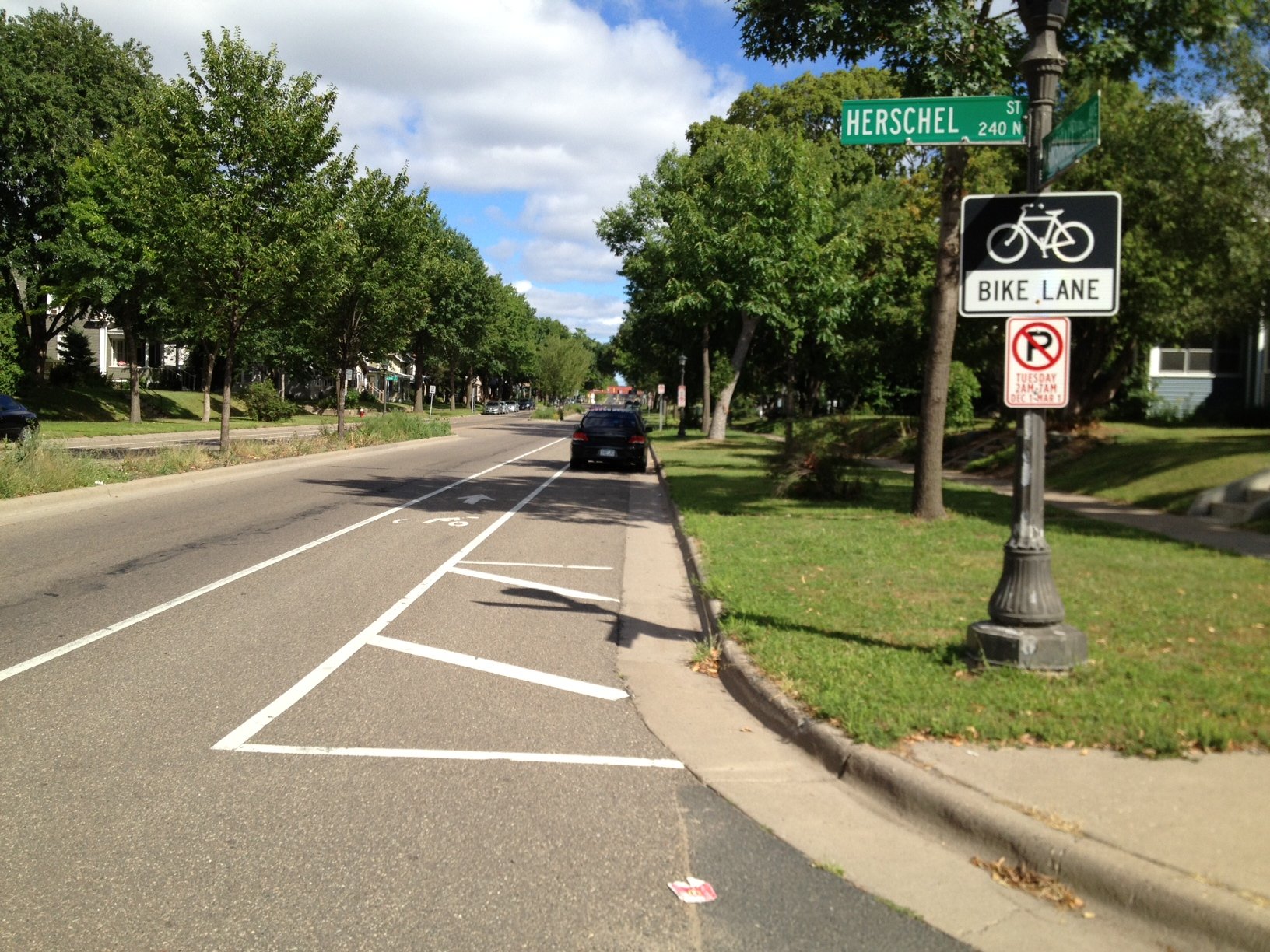 West of Snelling, a view of bike lane and median on Snelling Avenue. (Photo by Mary Turck)

In an effort to become more biker-friendly, St. Paul plans to add safer biking lanes along Marshall Avenue that will connect to other major bike routes. Scheduling of the project depends on funding, but St. Paul Department of Public Works Sustainable Transportation Engineer and Planner, Reuben Collins said that it could be completed by 2016.

“While we can appreciate a bit of healthy competition with our neighbors to the west, the Twin Cities as a whole has far more to gain when we perceive ourselves to be collaborators rather than competitor,” Collins said. “Part of the reason Marshall Avenue is such a critical corridor is because it is one of only a few connections across the Mississippi River that facilitates interaction between residents and businesses across municipal boundaries.”

Marshall Avenue was recognized as a bicycle alternative to University Avenue, and as an important connecting commuter route for bikers by the City’s 2010 Bike Walk Central Corridor Action Plan study. The study, completed by Transit for Livable Communities (TLC), also includes pedestrian safety, as well as vehicle speeds along Marshall.

TLC’s report recommends implementing a road diet — the removal of a central lane — between Snelling Avenue and Victoria Street. TLC’s report also recommends buffered bike lanes for this segment of Marshall Avenue. A bike boulevard (including a segment with a contra-flow bike lane) is recommended for the remainder of the street east to John Ireland Boulevard.

Collins said that the earliest that city funds could be used to complete the improvements would be 2016, but that would require competition against other potential projects for funding through the city’s Capital Improvement Budget process (CIB).

Collins said that TLC has been working with the community, and continues to tweak and revise the plan as the city and community stakeholders determine the appropriate improvements for the corridor. All groups involved intend to have a preferred concept by the end of 2014 so that funding can be requested through CIB, and then implemented by 2016. Collins also said that reaction to the project overall has been positive within the community, but that there have been mixed reactions regarding the proposed raised medians. These medians already exist on a few of the blocks west of Snelling — some between Fairview and Snelling and also on the west end of Marshall, leading to the Lake Street Bridge.

“While they provide safety improvements for pedestrians, some cyclists have expressed concerns that the narrowed roadway would not allow enough room for motorists to safely pass a bicyclist in a bike lane,” Collins said. “This concern was raised by several individuals at the first open house in April.”

To address these concerns, the final plan recommends “buffered bike lanes,” which include a 2’-3’ painted buffer zone.

Saint Paul Mayor Chris Coleman said in his State of the City speech in early 2013 that biker ease is a critical component of making commuting easier. Coleman also said he hopes to increase the number of trips taken with Nice Ride.

“In the coming year, we will examine how we can add more bike lanes throughout Saint Paul and in downtown,” Coleman said. “Doing so will not only make commuting easier; it will increase the number of trips taken by Nice Ride bike share users.”

Nice Ride locations continue to grow, especially in Minneapolis. Minneapolis continues to gain momentum as one of the nation’s highest ranked bike friendly cities in the country. Marshall Avenue, which becomes Lake Street on the Minneapolis side of the river, is a major connector between the two cities.