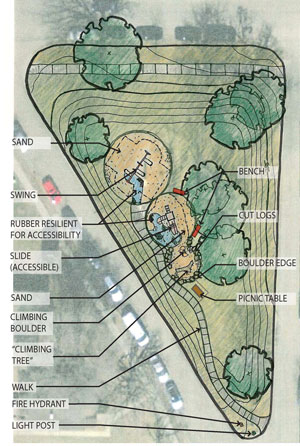 The plan for Monkey Island includes an accessible path, swings, a slide and some natural climbing areas.

When last we visited Monkey Island back in May, the city had removed all play equipment and benches from the small playground at Hendon and Branston avenues in St. Anthony Park. The neighbors were up in arms and the children were sad.

After a large neighborhood meeting with St. Paul Parks and Recreation representatives, a small group agreed to keep getting together to plan and raise funds for a newly configured play area.

One meeting, open to all neighbors, was focused on the design and included Kathleen Anglo, a landscape architect from St. Paul Parks and Recreation. At that meeting, Anglo was told that the group wanted to blend the idea of a “natural” playground (using sand, rocks and tree parts) with more traditional equipment (especially a swing set). Anglo reiterated that the city had to ensure that the park would be accessible. The neighbors asked about pricing and requested that an arborist come to assess the health of the trees on the hill.

As a result of that meeting and some creative brainstorming, the committee now has a schematic plan that includes an accessible path, swings, a slide and some natural climbing areas. Two benches (which may be moved) have already been installed in the park, and the plan adds an accessible picnic bench.

The actual equipment is still up for discussion, but the estimate of the cost of the plan is about $80,000, which includes a $10,000 contingency fund for unforeseen expenses.

“The good news,” says Seppanen, “is that the city is willing to meet us part way on the cost, but we do still need to raise money from the community.”

With the help of some grants and matching funds that look promising, the neighborhood will have to raise about $15,000. (There was also some discussion about doing a “community build” under the supervision of the Parks and Recreation Department that would help reduce the cost of the installation.)

Seppanen is a passionate advocate for the park. “We would really like to get Monkey Island back by early summer 2013,” she says. “The kids miss it so much, and there are several new families with small kids who have moved into the neighborhood. Parks create community and St. Anthony Park is known for community. We are so delighted with the funds that have already come in, but we need everyone to do what they can [and] contribute to this effort.”

There will be another community meeting to discuss the plan on Monday, Oct. 15, at 7 p.m. at St. Anthony Park Lutheran Church, 2323 Como Ave. All interested parties are welcome to attend.

If you would like to contribute to the fund, drop off a check at Park Midway Bank, 2300 Como Ave. The check should be written to the St. Anthony Park Community Council, with “Monkey Island” in the memo line.

Michelle Christianson is a longtime contributor to the Park Bugle and a neighbor to Monkey Island.