Yes, Minneapolis is the place to be. Check the UrbanMSP forum and you’ll notice that the Minneapolis thread is alive and well. It even breaks down Minneapolis into four distinct categories; all of which have more posts than the single “St. Paul” thread. Even the thread “Suburbs” has more comments, if only just by one.

St. Paul is … growing. To put this in perspective: I was having a conversation at a happy hour over development in both core cities. A friend mentioned that all the action was happening in Minneapolis. I disagreed. St. Paul is happening, just in a different way. It’s composed of smaller, less exciting projects: no skyscrapers, nothing much over 5 stories, lots of mid-sized projects along the Central Corridor and a handful of multifamily projects in neighborhoods.

St. Paul isn’t Minneapolis; and as a resident of St. Paul, I am content with that. You can read about that here.

I don’t know if those asking for money know this, but the people of St. Paul don’t really care that it’s not Minneapolis. In fact, we wish that city leaders would stop trying to be the big city and just concentrate on the things that make St. Paul great.

What makes St. Paul great? And what can be done to aid downtown, if not for stadiums?

I think the answer lies within St. Paul’s strong and vibrant neighborhoods, where you’ll typically find a good mix of housing (both affordable and otherwise) coupled with neighborhood retail. When it comes to attracting people, the biggest catalyst is other people. The best way to do that is create a lively mix; that also means no entertainment or cultural districts.

Now, St. Paul needs to migrate the traits from other areas to form a successful to downtown neighborhood. It’s doing that with Lowertown (minus the housing mix). By the way, the trick is getting existing skyscrapers to behave properly in the pedestrian realm.

I’m basing these recommendations on one of my favorite areas of St. Paul: the stretch along Selby Avenue between Western and Dale Avenues. For starters, it has a surprisingly healthy mix of retail and a range of housing options. 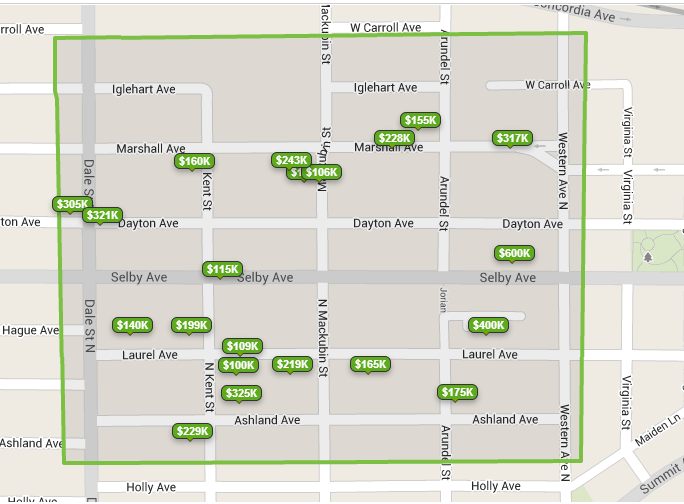 This wide range of housing options is within a healthy walking distance to shops, restaurant, pubs, bike lanes, corner stores and transit. And it’s cheaper, but still urban and cool. That’s what Minneapolis doesn’t have for it’s urbanism: as much affordability.

Herein lies St. Paul’s major strength. The City shouldn’t be afraid to flaunt it. St. Paul isn’t Minneapolis-Lite. Minneapolis is St. Paul-bloated. By the way – could you buy this for under $200k in Minneapolis?

Minneapolis is booming, but St. Paul is the place to be.