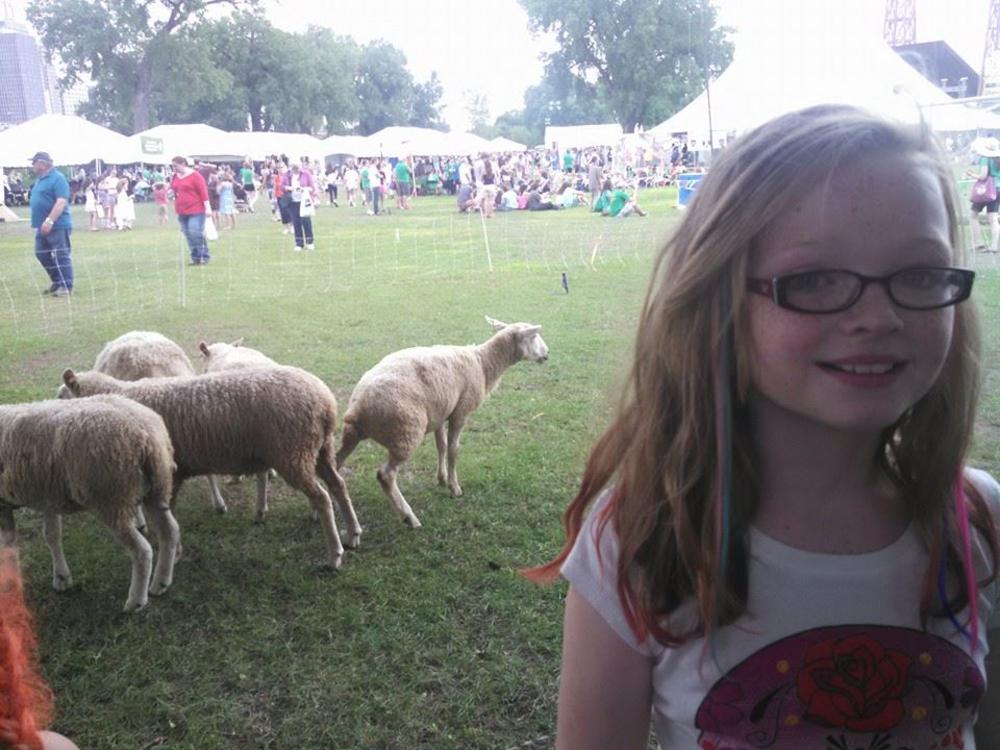 I will stand by St Paul in good times and bad–but I have to admit it’s easier and more fun to stand by her with a beer in hand and music blaring and that’s what I did all weekend. I didn’t leave the city once and I was able to walk and/or take the train to most of the festivities, which started Thursday night.

Thursday night is Music in Mears Park. It’s a labor of love for the organizers who have been putting on concerts in the park for 11 years. Last Thursday, August 7, the show featured the Cactus Blossoms and the Brian Just Band. The Cactus Blossoms are my favorite Bluegrass and Americana band. They played to a large audience of all ages and a lot of dancers. I saw the best three year old dancer, the most emotive 30 year old dancer and a few couples that have clearly been two-stepping for decades. They played original songs, such as the Buffalo Song from the album recorded at the Turf Club a year ago and they play a range of classic covers of Jimmy Roger and Johnny Horton. I hadn’t seen the Brian Just Band; they are mellow with a sometimes country twist. But the violin and flute are absolutely lovely. It’s really easy music to enjoy.

Friday (Saturday and Sunday) we hit the Irish Fair. It was the 35th annual Irish Fair. I can remember back when the Fair happened on the coldest weekend in winter at the Armory in St Paul. It was more like a high school set up with booths on the history of the Irish in St Paul and a few bands. Now it is a full blown extravaganza that fills Harriet Island. There’s lots of music–I could hear the fiddles playing from as far away as Ramsey Hill on my walk to the Fair. The Fair features very traditional music and the crowd pleasing Irish rock-punk. The headliners included a lot of the punkier sounds. The Mahones have Pogues meet Flogging Molly flavor. The Screaming Orphans sound a lot like Cranberries. Their song You’re a Liar is very reminiscent of Dreams. Gaelic Storm is a perennial favorite at the Irish Fair. Altan was the standout being much more traditional that the other main stage acts.

But the Fair isn’t just music, it’s dance and sports. There’s an opportunity to watch Gaelic Football and play a little Hurling, which is like hockey–except you swing the stick overhead and keep the ball in the air. In other words not for anyone with a strong will to live! There is a chance to learn about just about every aspect of Irish culture – literature, history and art. There’s a kid’s section with crafts and music tailored to young ears. The sheepherding dog is always a hit. There’s food – the bread pudding was very tasty. There’s also beer. Lots of beer.

While Harriet Island was full of green, downtown was playing the blues and other genres of music all day Saturday with the second annual Lowertown Guitar Fest. The event is organized by local musician and musical catalyst Molly Maher. I was able to bounce a little between the Irish Fair and the Guitar Fest. The range of guitar players was terrific. I saw a couple of songs by Phil Heywood, who was mellow and really nice introduction to a relaxed day. Then I made a point to get back to see Molly Maher and Gabriela Sweet, two local guitarists. Partially I wanted to see them; partially I wanted my 10 year old daughter to see two women on stage. The passion for the guitar came out when someone asked what they were playing. I don’t know guitars but these women do and it’s hard not to get enthusiastic about a 1938-whatever when someone else is so clearly excited. And the sound just drew us in. There was a mesmerizing dance song from Cuba and a song Kevin Washington, that included drums that sounded like thunder that someone set off the guitars perfectly. A nice contrast to the manic mood at the Irish Fair. Robben Ford rounded out the show series blues.

Sunday we traveled back to the Irish Fair but hit the Farmers Market on the way. We weren’t there to buy this week (we often are) but just to sample. The tasty laws changed this year for Farmers Markets and many of the vendors celebrate with offering generous tastes of their wares.

The added extras to all three events—they were all free, they were all kid-friendly. They all included access to food and beer. They all were open to anyone. I think events in Mears Park especially highlight the openness to everyone. They get an interesting—but always friendly crowd down there. Music in Mears has several more weeks planned if you want to check it out. And just imagine once the Saints Baseball team moves downtown–even more to love!