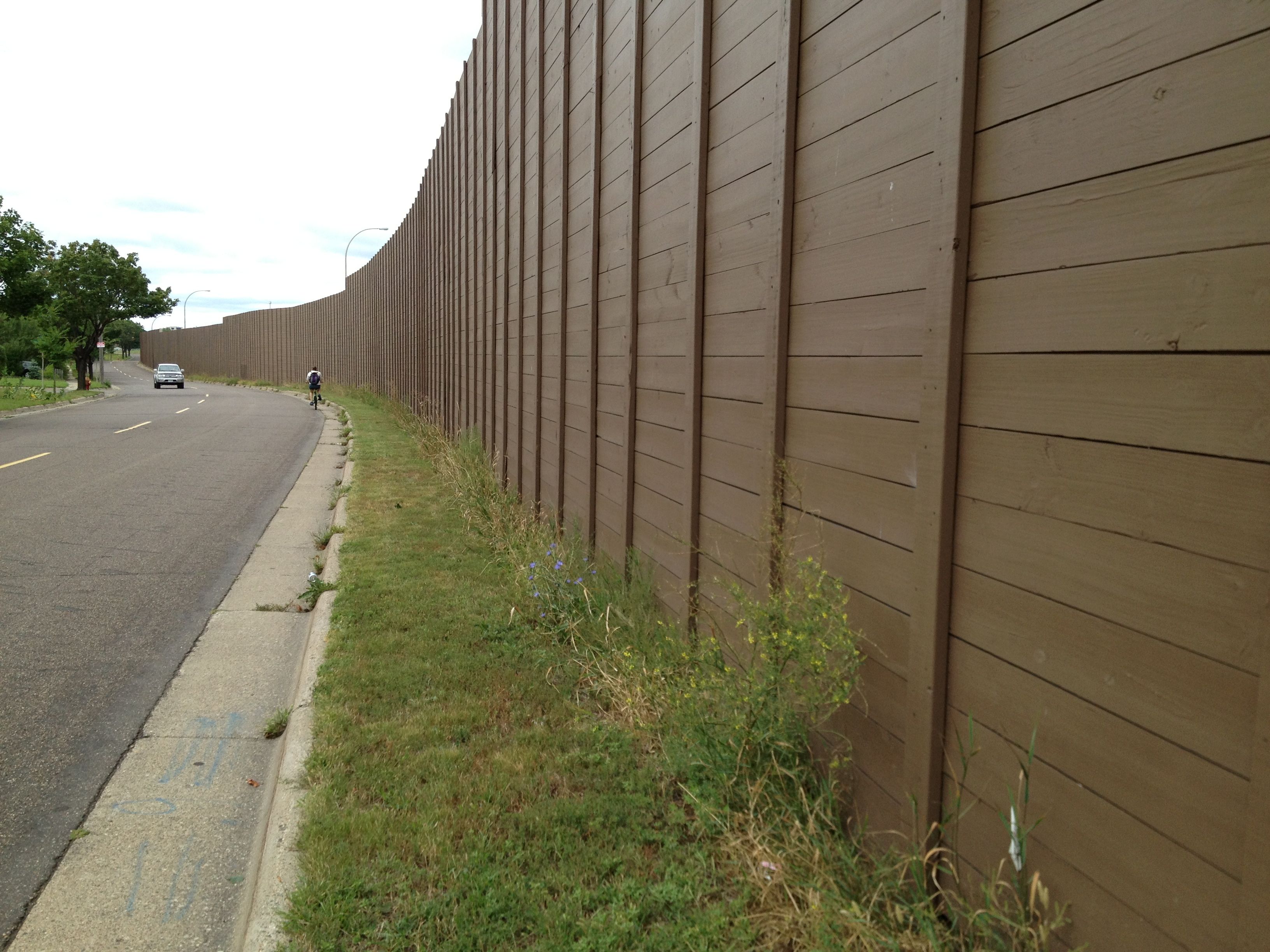 Over in Minneapolis, Marcy Holmes residents have succeeded in stopping construction of a freeway sound wall in their neighborhood, but it took quite a fight to do so. In St. Paul, some Desnoyer Park residents want a sound wall to minimize noise from I-94 west of Pelham Avenue, but MnDOT says it’s not going to happen. In 2011, a sound wall was built east of Pelham, and planting along the wall is set to begin this fall. What’s the difference?

FULL DISCLOSURE: The writer is a resident of Desnoyer Park.

A noise barrier was built on St. Anthony Avenue west of Pelham in 2011. That portion of the frontage road, between Pelham and Cretin Avenue, is about to see some major improvements. After a year of meetings, MnDOT and St. Paul and neighborhood representatives have landscape plans for that portion of the sound wall.

Planting is targeted for as soon as fall 2013, with a city resolution needed before then. Neighborhood resident Kevin Molloy has shepherded the process along, with planning calling for rose bushes, prairie grasses, ivy and low-growth shrubs to soften the bare brown of the wall. Molloy has conferred with other neighbors to get agreement on plans for plantings.

Next steps include finalizing the plans, getting a city resolution adopted, and lining up a “volunteer posse” for planting day. If you’d like to volunteer, send me an email and I’ll forward it to Kevin Molloy.

Sitting in his front yard, facing I-94 and the railroad tracks, Mat Curran reeled off facts, dates, numbers, and frustration. He’s an active member of the Desnoyer Park Residents for Noise Relief (DPRNR).

“State statute says they have to mitigate when [freeway noise is] exceeding limit and that has been measured and shown,” Curran insists. He says MnDOT first said that there wasn’t enough noise to warrant a sound barrier on St. Anthony Avenue west of Pelham. Then, he said, MnDOT said that there were not enough houses affected, and then that a complicated cost/benefit formula didn’t yield a high enough return on the cost of a wall.  A November 2012 email from Frank Kurkowski and the DPRNR sets out their position:

“Again, state law mandates that if the noise standards are exceeded, then all reasonably available noise mitigation efforts must be employed to abate the noise. According to MnDOT documents, the noise from I-94 in our neighborhood exceeds both daytime and nighttime standards. In 2011 noise walls were built along I-94 to the east and west of our neighborhood. We believe that taking no physical action to abate noise does not fulfill the requirements of the law …

“You have told us many times that MnDOT decided against building noise wall NB-R for our neighborhood because it did not meet the cost effectiveness criteria contained in the noise policy. However, there is nothing instate law that says noise mitigation must be cost effective or how cost efficiency is determined.”

Curran said the real reason that MnDOT doesn’t want to construct the noise barrier is a pending plan to redo the interstate and its intersection with Highway 280 and to put in place express-type lanes from downtown Minneapolis to downtown St. Paul. He believes that MnDOT doesn’t want to erect a noise barrier that might have to be moved or taken down for freeway re-construction. But that won’t happen for four years, and Curran doesn’t think the neighborhood should have to wait that long for noise reduction.

MnDOT also removed some trees and vegetation between St. Anthony and the railroad/freeway area, and has made proposals for replanting.

Ready for planting this fall.

Plan for plantings going west from Cretin along sound wall

Plan for plantings going east from Pelham along sound wall.