Low-power FM is coming to St. Paul, with the FCC approval of a proposal based in the East Side. The next meeting of the radio committee will be April 15th at 6 PM at the Dayton’s Bluff Community Council offices at 798 East 7th Street.

Organizer John Slade said that the frequency is 104.7, and that no name has been selected yet. Along with forming a community board, that will be one of the first orders of business. Slade said he likes East Side Equity Radio/Radio Equidad, since “having more than one language in the name is probably a good idea.” Slade was interviewed at the March 25 Newsroom Café in Dayton’s Bluff.

So what is this low-power radio?

John Slade: Fourteen years ago, Congress tried to allow a set of new, non-profit radio stations to happen in the United States. A rules change pushed by the National Association of Broadcasters prevented most of those stations from seeing daylight. That rule change was overturned in about 2012, which meant that January of 2014 saw 3000 people across the country applying for low power FM licenses This means 100 watt stations with an average coverage area of seven miles in diameter

For us, that means we can cover about 150,000 people, mostly on East Side of St. Paul, Maplewood, downtown, Frogtown and the West Side.

We are one of three Twin Cities frequencies that were made available. Twin Cities Community Radio is a group that has been working with a Frogtown and a Phillips location.

We got our permit first because we basically had the cleanest application with the least amount of competition. It was awarded yesterday, March 24. That’s the award to build it – we have 18 months to build and flip the switch on the radio station. 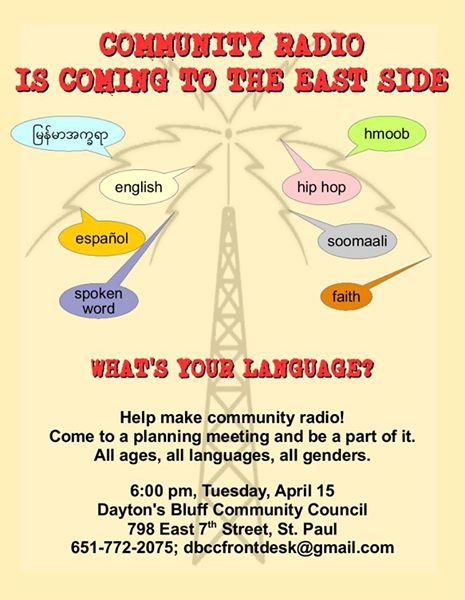 We are really committed to making this a radio station for all the people on the east side. That means the people who have least access to media, people of color, low-income, people whose main language isn’t English, and youth We have to reach out to them and build a community board that represents those communities and will embed us.

Why low power? What does that mean?

JS: The FCC gave it that name. It’s because they are small stations. They are meant to be neighborhood stations.

We intend to represent our neighborhood.

When you say construction, what does that mean?

We have to build a transmitter facility. We are working with 180 Degrees. They have a facility on East 7th and Minnehaha. We will put our antenna on top of their two-story building. We have to build studio space where we have our microphones and mixing board and CD players and turntables and all those things.

We are writing grants to support the construction and, to some extent, the operation of the station. We expect it will be largely volunteer run, if not exclusively But we’ll still have some moderate operating costs.

How much do you have to raise to get going?

JS: We’re trying to raise $20,000. The estimates from Prometheus Radio Project, which is the best organization supporting these radio stations, say you can go from $12-100,000 for your construction, and we’ll definitely be at the low end of that.