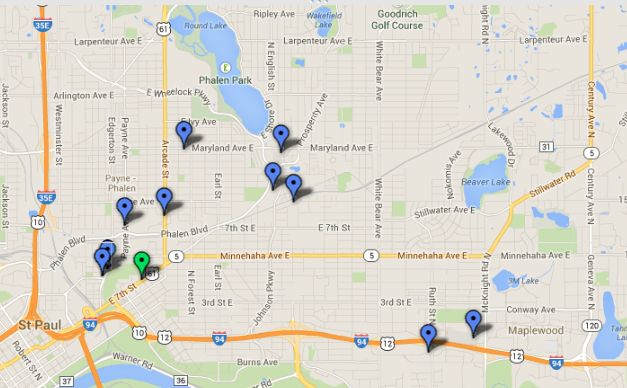 A couple of weeks ago, the Newsroom Café group meeting at Dayton’s Bluff Community Council talked about groceries in the neighborhood. By now, most folks have heard that Mississippi Market plans to move in on Seventh Street, just north of Metro State University and across the street from Swede Hollow Café. But what’s the current grocery situation, and what will they add to the mix?

Generally, said Tong Thao, people at a recent meeting were “pretty positive about Mississippi Market coming over here. … The only thing is — the food’s going to be more expensive. There were people questioning why we want a grocery store that people can’t afford. The only answer was that it brings choice.”

He compared it to the little Latino grocery stories, saying that because of their existence, “Rainbow had to start handling some of the foods they had, in response.”

As the discussion went around the table, other issues were raised. The vacant lot looks bigger than one grocery store space, and, said one of the people around the table, the city wants a big apartment building. But the neighborhood wants to build up retail, not apartments.

I asked where people shop now, and the answers showed quite a few existing groceries, some on bus lines, some far enough away that it’s tough to get there and back without a car. The map above shows the groceries that were identified in this discussion, and there could be more that I missed.

While Mississippi Market will have more organic and locally grown foods, “I don’t know how they’re going to appeal to the diverse communities of the East Side,” said one of the people at the table. “We have all the markets here — the Latino markets, the Asian markets. How are they going to attract crowds and compete with that?”

Mississippi Market has a website telling about their plans, which describes the future co-op:

“Plans for the project include a 11,500 sq ft retail space on East 7th Street and will house a commissary kitchen to support our delis and wholesale operations. Currently we employ 180 people between our two locations and will bring new jobs to the area, furthering our mission of creating positive change in the community by influencing the production, distribution and enjoyment of food.”

What do you think about the plans, and about groceries and food needs on the East Side?