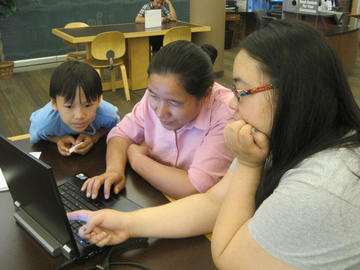 With six “very old” chairs, the elderly woman knew she needed some repairs. Trying out her new computer skills, she put “chair repair” into Google, and saw several repair shops within easy driving distance — and a website called “how to repair chairs.” And, she proudly told her Computer Club friends, she followed the directions and fixed all the chairs herself!

The Computer Club for Seniors at Episcopal Homes in St. Paul was just one of the projects that this year’s CTEP members dreamed, planned and implemented. CTEP stands for the AmeriCorps Community Technology Empowerment Program of SPNN. Program Director Joel Krogstad and Program Coordinator Lisa Peterson-de la Cueva supervise 35 CTEP members, who work with low-income community members and new immigrants, teaching basic technology skills to find jobs and function in the increasingly computer-dependent world. According to Krogstad, CTEP helped people get more than 600 jobs during the year, as well as helping about a thousand people get certificates attesting to their technological literacy.

The Computer Club for Seniors, though, is something more than the regular job assignments in libraries and community centers. St. Paul’s CTEP program asks members to propose, plan and implement their own civic engagement projects during the course of their year-long AmeriCorps experience.

“What you are most passionate about is probably what you’ll do best,” Krogstad explained at the seventh annual celebration at the Wilder Foundation on August 1. CTEP members propose ideas, talk about them and then vote on which ones they will collaborate to implement. By December, the civic engagement projects for the year have been chosen, and each member can work up to 75 hours on a project during the following six months.

If the projects require funding, that’s part of the plan. The CTEP members committed to the Helping Ex-Offenders Through Technology project put on a benefit concert to raise the $300 they needed. This year, six of the projects did crowd-funding campaigns, Krogstad said.

Anna Toegel wrote about her experience in the Helping Ex-Offenders Through Technology project, working with a man who had been incarcerated from more than 10 years. He was now employed, but had an adult daughter who lived in Florida. With Toegel’s help, he set up an email account and was able to re-establish a relationship with his daughter:

“Family interactions can revolve around texts, downloadable pictures, emails, and social media, but Steve was previously closed off from this world. Steve has now learned how to open the photos of his daughter and her new English bulldog puppy that she had attached to an email. He downloaded it, saved the photo on the computer, and then printed it to take home with him.”

This project also exemplifies the CTEP commitment to engagement with the community. Amicus Re-entry Services and Minnesota Computers for Schools helped the four CTEP members to identify clients and to provide them with computers to use.

These are just two of the civic engagement projects that CTEP members worked on, in addition to their regular job assignments in teaching technology literacy at non-profits, community centers, and libraries and assisting partner agencies to increase their technology capacities. The full list is in the sidebar.

The projects, said Krogstad in a press release, “blow me out of the water, especially this year! They just bring an energy and diversity of approaches to bridging the digital divide that is really inspirational.”