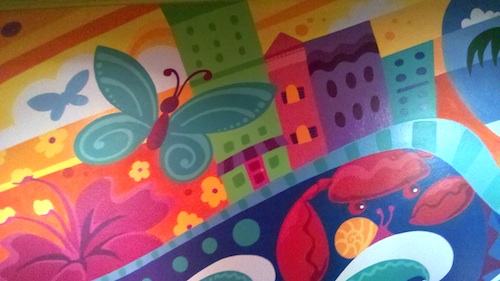 Central Corridor construction has been hard on a lot of on- and near-University Avenue businesses, among them the spot of color and sunshine that is Caribe Caribbean Bistro at 791 Raymond Avenue, just north of University. Caribe’s mango and cheese empanadillas and mofongo taste like a little bit of winter vacation in the sun, without paying airfare.

When I read about the restaurant’s difficulties, I started thinking about what might help. A Monday lunch stop proved unsuccessful — that’s the one day that Caribe is closed. Then I heard about cash mobs, a variation on flash mobs with a goal of supporting local, independent businesses.

This is a group to plan events where people go to locally-owned small businesses with $20 to spend. It is intended to demonstrate support for local businesses and keep money in our regional economy. If you cannot spend $20, spend what you can; if you can spend more, do so. It is a form of economic activism, on a scale that allows the average person to participate…

I stopped in at Caribe this evening, and was told that, after Kathie Jenkins wrote about their trouble in the PiPress in mid-December, business picked up. January, however, is always a tough time for restaurants, “until people lose their New Year’s resolutions,” said Lianna, one of Caribe’s waitresses.

You can call ahead (651-641-1446) for reservations. The restaurant is small (just a baker’s dozen of tables), but I’ve never had to wait. If, by some stroke of good luck, cash mobs or loyal customers fill it up, there’s always Biaggio’s around the corner on University, or On’s Kitchen a little more than a mile to the east, and dozens of other great, small restaurants between Lexington Avenue and downtown St. Paul.

If anyone is inclined to organize a cash mob, check out the blog and Facebook page. Even without an organized mob, dropping a Jackson on local businesses is a great way to support community.

And here’s a parting word from the Sankalp Gosain on the Cash Mob blog:

[I]n the same way that a store will hand out coupons or give away samples so customers will give them a shot, Cash Mobs can motivate the locally-minded into a store they might not have otherwise checked out (see “appeal of partying”). And like any other loss-leader, this just might mean a whole bunch of newly-minted repeat customers –something that actually can move a local biz into the black. …

And that’s when the magic happens. Cue the chairman of the Federal Reserve…

Ben Bernanke: “Small businesses are central to creating jobs in our economy; they employ roughly one half of all Americans and account for about 60 percent of gross job creation, newer small businesses, those less than two years old, are especially important: Over the past 20 years, these start-up enterprises accounted for roughly one quarter of gross job creation even though they employed less than 10 percent of the workforce.”