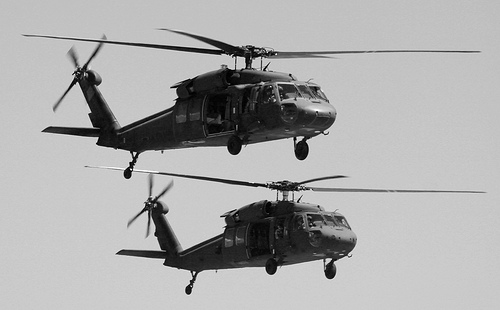 What’s that in the sky? It’s no bird, it’s a Black Hawk military helicopter and it’s coming to my house — or yours. We don’t know exactly where or exactly when, since that’s highly classified information, but St. Paul has been chosen for U.S. military Special Ops “urban environment” training. The Special Ops began August 19, according to the St. Paul Police Department public relations office, which said in a couple of press releases that the training will continue through September 1.

“For safety reasons, exact training times and locations are not being released,” according to the press release, but you can be assured that any Black Hawk helicopters flying over your house between 7 p.m. and midnight might be part of it. Also included:

The majority of the training, which has been coordintaed with property owners where it will take place, will be out of public view. However, community members may, on occasion, see U.S. Special Operations Command members and Saint Paul police officers training in some public areas. The exercises are standard and similar to training that has taken place in cities nationwide.

And just in case you were wondering, “A schedule of the training exercises is not being made available..” (Emphasis added.)