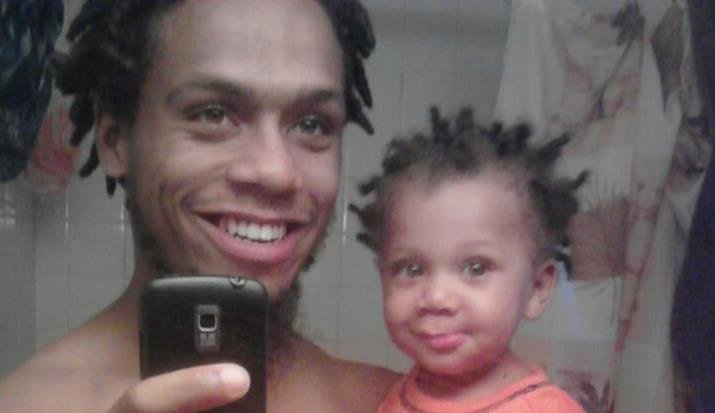 The man in a recently released cellphone video who was tasered and arrested by St. Paul police officers after refusing to give up his name has stepped forward on Wednesday, Aug. 27 after posting the video online. St. Paul police dropped charges on July 31.

Christopher Lollie, 28, said he was waiting to pick up his two year-old and four year-old children from New Horizon Academy’s daycare around 9:43 a.m. on Jan. 31, when a security guard from the First National Bank building asked him to leave the area where he was sitting. The guard then called the St. Paul Police Department when Lollie refused to do so, he said.

According to the police report, St. Paul police officers Michael Johnson and Bruce Schmidt “were called to the First National Bank Building on a report of uncooperative male refusing to leave.” The third female officer in the video has been identified as Lori Hayne, and has since retired, reports the Pioneer Press. The name of the security guard that Lollie claims made the call was omitted from the police report “due to safety concerns.” Lollie was charged with trespassing, disorderly conduct and obstructing the legal process.

The St. Paul Police Department did not return our calls in time for this report, but released this statement:

“As is often the case, the video does not show the totality of the circumstances.

Our officers were called by private security guards on a man who was trespassing in a private area. The guards reported that the man had on repeated occasions refused to leave a private “employees only” area in the First National Bank Building.

With no information on who the man was, what he might be doing or why he refused to leave the area, responding Saint Paul police officers tried to talk to him, asking him who he was. He refused to tell them or cooperate.

Our officers are called upon and required to respond to calls for assistance and to investigate the calls. At one point, the officers believed he might either run or fight with them. It was then that officers took steps to take him into custody. He pulled away and resisted officers’ lawful orders. They then used the force necessary to safely take him into custody.

The man was charged with trespassing, disorderly conduct and obstruction of the legal process. Those charges were dismissed in July.”

Soon, two more officers show up and restrain Lollie as he continues to explain he’s done nothing wrong. The following struggle results in Lollie being tasered and arrested.

Minnesota does not currently have a ‘stop and identify’ statute in place that would give police the right to arrest someone for not identifying himself.

By the time the police arrived, Lollie said he had already left the spot to go meet his kids by the daycare and expected the officers to disregard the call, since he believed the areas to be public. “[What did happen] was the complete opposite of what I expected to happen,” Lollie said.

Even if he wanted to, he couldn’t provide identification, he said, since his wallet was stolen along with his I.D. earlier that month.

Lollie said that at the time of the incident he was working a temp job cleaning at Cossetta’s, just down the road from New Horizon. He and his girlfriend were separated then, he said, so she would drop their children off at the daycare in the morning and he’d pick them up when he got off of work.

His children had been attending New Horizon for about 9 months at that time, he said, so many people at the school already knew who he was. Luckily, he said, his children weren’t there to witness the incident since the children’s mother still hadn’t arrived. But Lollie’s children’s classmates and teacher all witnessed the event, he said.

“The teacher actually gave me a witness statement, stating that ‘he was calm, he wasn’t doing anything wrong, he was talking to them, and they just started assaulting him,’” he said.

Since then, Lollie said he fought the charges and because of the teacher’s statement and the footage from the building’s security cameras, all charges against him were dropped as of July 31.

Lollie said he couldn’t post the video until his confiscated phone was returned, but that he also didn’t want to post it because it hurt to watch.

“It hurts, it really does,” he said. “Because no matter what — I could be the nicest guy in the world, talk with respect, I can be working, taking care of my kids, doing everything a model citizen is supposed to do — and still I get that type of treatment.”

Currently, Lollie said he’s taking his case to internal affairs and hopes to bring the officers who assaulted him to justice.

“[Posting the video] makes me feel empowered,” he said.