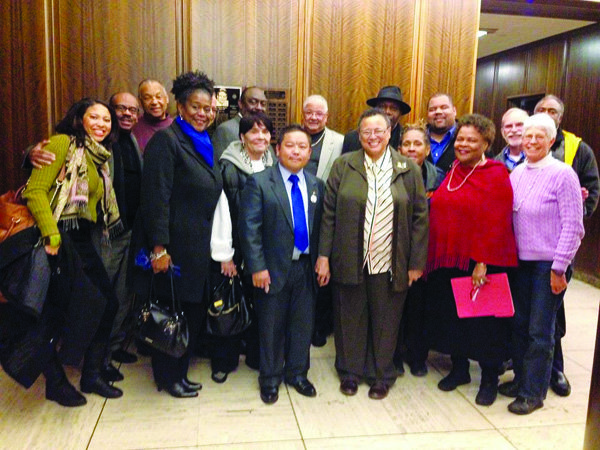 After a long career in public life and many achievements and distinctions, St. Paul’s Debbie Montgomery recently racked up another one: having a large section of a major St. Paul street renamed in her honor.

The ceremony celebrating the passage of the resolution has already taken place; the actual dedication and placing of street signs will happen, per Montgomery, “on a warm day when we can actually put the signs up.”

When we asked Montgomery what she considered her proudest achievement, she hesitated before replying, “I have never thought of it that way… People told me, ‘You just don’t beat your chest enough.’ I told them, ‘It’s not about me. It’s always been about my community, my city… It’s just not about me.

“I’m a street fighter. I want to get down. If there’s a problem, I want to solve it. I don’t need the accolades. I just want to get things done.”

Montgomery did, however, point to some of her accomplishments on behalf of her ward during her term on the city council: “In four years I got 1,350 new jobs, $109 million in new investment into the poorest ward in the city, 400 mixed-income housing units, the brand new Jimmy Lee rec center built, getting a Super Target built and making them hire 300 new employees, all Ward One residents.

“Like I say, it’s not about me, it’s about getting stuff done. I saw a problem. The community said they needed jobs, they needed affordable housing.”

Getting things done is still job one. Said Montgomery, “I’m teaching at two different colleges, MCTC and Hennepin Tech. I’m taking care of my husband and my mother and my brother. My mother and my brother were in a car accident two years ago, and both have traumatic brain injuries. My husband just had major bypass surgery in September, so he’s on his road to recovery.

“I’m still engaged with the community. I’m still president of the YWCA Board of Directors, and I’m involved in numerous community activities and boards.

Montgomery is also involved in trying to help resolve some remaining issues with light rail in St. Paul and the proposal to change the number of lanes on University Avenue in St. Paul.

As for what the future holds, Montgomery answered, “I want to stay involved with issues that this community and the city have. I just want to thank my community and my city and city leaders for the support they’ve given me to make our community and this city more livable.

“I’m still in the struggle, still trying to make sure the doors are open for everybody.”