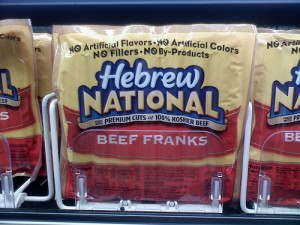 A St. Paul judge has thrown out a case against Hebrew National which claimed that their hot dogs and other meat products weren’t entirely kosher. United States District Judge Donovan Frank (which is ironic considering a hot dog can also be called a “frank”) threw out a case brought by 11 consumers against ConAgra Foods Inc., maker of Hebrew National hot dogs.

Hebrew National, whose slogan is “We Answer to a Higher Authority,” marks all their products as Triangle K kosher, one of the most stringent kosher certifications. The lawsuit claimed that ConAgra used non-kosher procedures at their Hebrew National meat plants, and that the certifier, AER Services Inc., did nothing to address the issue when presented with facts and examples. When the lawsuit was filed this past June, Triangle-K issued a strong statement blasting the “outrageously false” accusations and challenging all their detractors to a duel (OK, I maybe made up that last part).

In his assessment of the case, Judge “Ballpark” Frank agreed with the stance of Hebrew National, saying that this issue really isn’t about the laws of man, but rather it’s about the laws of God, and thus a simple District Court has no jurisdiction in the matter. He determined that Triangle K and its rabbis determine whether something is kosher.

“Naturally, therefore, this Court cannot determine whether Defendant’s Hebrew National products are in fact kosher without delving into questions of religious doctrine.”

Ultimately this was probably the right decision for the District Court judge to make. To rule on this case he would have to determine if Traingle-K is handing out kosher certifications to foods that aren’t in fact kosher. The laws of kashrut have no basis in United States law, so for him to make that ruling he would have had to delve into ruling on religious Jewish doctrine; and obviously he wants to keep his robe free of any of those mustard stains.

However, the real issue still needs to be addressed: are Triangle-K and ConAgra manipulating the kosher certification process for their benefit? Hebrew National answers to a higher authority, but which authority is that? The authority of higher purpose, or the authority of higher margins? Large-scale Kosher certification has already been publicly maligned once before. The sad fact is that due to the particular requirements of kosher slaughter, many animals designated for kosher products are actually treated worse than their non-kosher counterparts.

It’s a classic spirit vs. letter of the law issue. If you believe that laws of kashrut are in place to protect the welfare of the animal, then it’s impossible for a brand like Hebrew National to keep up with global demand for their products and still treat all their animals humanely.

On a purely practical level it’s impossible for Hebrew National to keep up with the demand for over 20 billion hot dogs a year (in America alone) and still adhere to both the letter and spirit of the law.

Having put this case to rest, Hebrew National would like to assure you that they will continue to make 100% kosher beef franks. At the very top of their website they present this message:

“In light of the recent lawsuit, we want to assure our fans that we stand behind our kosher status. Hebrew National products are kosher, and this lawsuit is without merit. Hebrew National’s kosher status is certified by a well-recognized and authorized third-party. There is close rabbinical supervision of the food preparation process and packaging equipment. For more than 100 years, Hebrew National has followed strict dietary law, using only specific cuts of beef that meet the highest standards for quality, cleanliness, and safety with no by-products, artificial flavors, or artificial colors.”