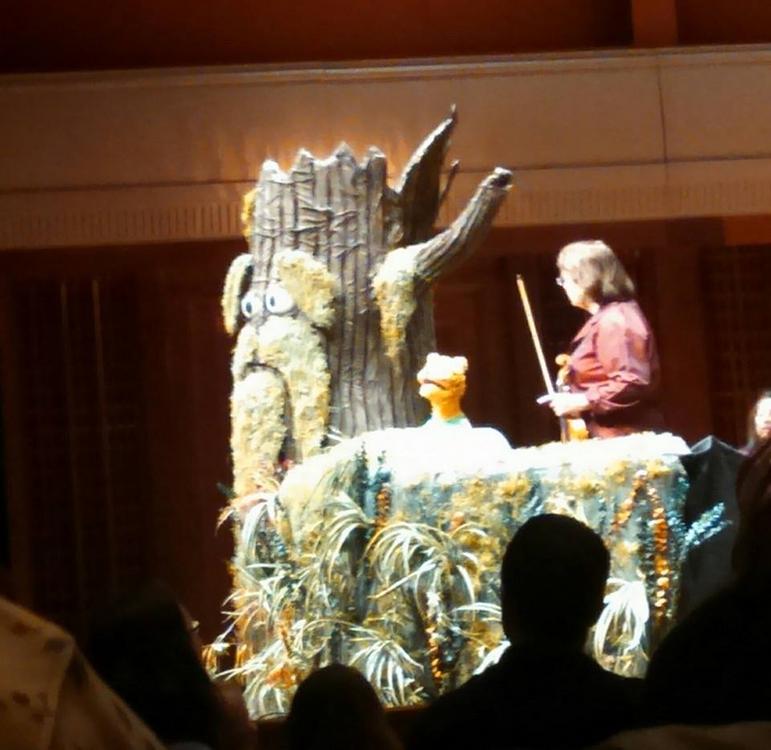 I like orchestra music—about once every three years. The music is beautiful. It’s very relaxing. But I always feel like maybe I’m not quite getting it. And to be fair, I rarely like entertainment where you’re expected to sit quietly for hours. But I happened to get an email invitation to the St Paul Chamber Orchestra’s (SPCO) free family concert, For the Love of Nature. I looked at the calendar and realized, it’s been about three years. It’s a perfect chance to get my healthy dose of grownup music spun for kids.

I was a little anxious; my youngest is 10, which put us both on the older side for the show. I was afraid it might be music that’s too adult and antics that are too toddler. I was proven wrong on all counts. SPCO did an amazing job!

No worries about feeling like you have to sit like a stature. The lights never really came all the way down. Audience members had coffee, lollipops, granola bars. Kids were asking questions; parents were shushing. Toddlers were milling about. People were picking their noses unabashedly. (OK I’ve seen that at previous orchestra shows too.) The audience was alive. And despite the number of babies, everyone stayed awake, which I’ve never seen before at the orchestra.

The orchestra started and soon after Leopold the Lion burst on the scene, headphones on, singing some song from Frozen. Daria Adams set down her violin to ask Leopold to keep it down. His response, “You’re kind of interrupting my musical moment.” Perfect teen ethos!

Leopold and his new-found, wise friend Tree talk through the various parts of the music and show. Tree points out that Beethoven’s Sixth Symphony is about chipmunks and narrates the story as the SPCO plays. It’s a fantastic educational opportunities for the kids. Leopold and Tree use every old training trick in the book, which was perfect since nuance is lost on kids anyway. At one part Tree asks the SPCO to replay certain portions of the musical movement—by instrument. It was an instant replay—for arts—as the commentators talk through what makes the movement sound like wind, or birds or water. Genius to bring in that simple sports tool.

Leopold is stuck on the comparison to Frozen. I may be the only parent in the world who hasn’t seen that movie – but my date was able to fill me in. Using Frozen made it easy for kids to recognize that this is a story. And it’s a story with a lot fewer complications that Frozen apparently. Going form the known to the unknown is such a smooth way to get kids to learn.

Tree remarks that “everything seemed almost perfect” or something like that. Leopold stops him short – what do you mean seems? That’s never a good sign. Are you foreshadowing? And just as my 10 year old turns to ask me what foreshadowing is—Tree explains it. Again, an obvious tactic but that doesn’t make it any less brilliant.

Best of all we really enjoyed the show. I could see that everyone else did too. The program called the show “an awakening of cheerful feelings” and it was. Maybe SPCO should add commentary to all of the shows. An adult audience might not need a puppet—they could just use the opera subtitles. Introduce a story about chipmunks or war a romance—maybe Fifty Shades of Grey, the symphony.