In St Paul Bicycle Plan: Good Enough? I discussed five things that I believe, along with the Bicycle Plan, can get St Paul close to the ‘World Class Bicycling City’ that they say that they want to become and that many of us think that St Paul can become and will greatly benefit from becoming.

Here is the final piece that I think can pop St Paul on to the world class list.

So far, with the plan and five suggestions, we have a relatively good network of bicycle facilities that will give most people something safe within about a half mile of each end of their trips—usually home and some destination. Hopefully we’ve also made major destinations such as schools and retail safer and more accessible.

Now, we need to do something about the local miles—those on each end of our trips and more importantly, that will be the entirety of most trips—to school, the grocery, hardware store, or cafe.

Building safe bicycle facilities on all of these streets would be difficult and expensive. And unnecessary. The vast majority of these are residential and residential streets should be safe for bicycling without any special facilities because they should also be safe for walking, playing, and having a chat with friends.

The problem with these streets, similar to the problem with downtown St Paul discussed in St Paul: Ripe for Ruin, is through traffic—people who are not going anywhere local, just quickly passing through on their way elsewhere. These are residential streets for people to live on, not through-ways. For cars and trucks they should be for very local access only.

Traffic calming measures help, but only a little. Calmed streets will often still have considerable through traffic and much of it still going quite fast between calming measures. These drivers don’t live nearby, this isn’t their neighborhood, and they don’t really care about the neighborhood they’re driving through. They just want to get where they’re going. Many are also using these streets as rat runs—a shortcut of sorts to avoid having to drive on more congested major streets intended for through traffic.

The good news is that this may be a fairly easily solved problem by doing much the same thing as in downtown. Instead of creating larger people friendly districts though, we’re going to create our own version of pocket neighborhoods.

And this isn’t good for people in local neighborhoods. Let’s interrupt the grid and see what happens.

For example, the Summit Hill neighborhood south of Grand and east of Lexington. Let’s make Milton, Grotto, and Fairmont uncrossable by motor vehicles, perhaps with bollards along them (and maybe a fountain in the middle where they intersect).

Taking the concept of calming one step further and calming a neighborhood instead of one single intersection.

Now, if someone at a house on Goodrich between Grotto and St Albans wants to go somewhere north on Lexington, instead of driving all the way down Goodrich, they’ll go up to Summit. 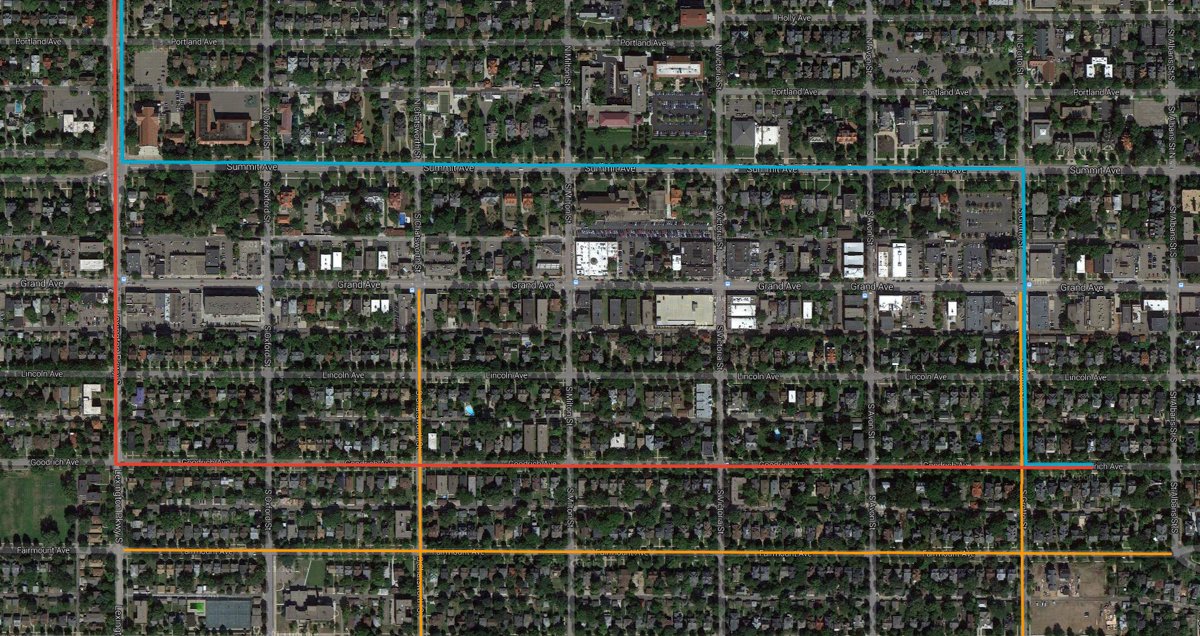 Red line is a typical route, Blue line is a better route with less impact on the neighborhood.

Yes, we’ve added a car to Summit. More importantly though, we’ve removed a car from a residential neighborhood street.

Along with this, let’s make the speed limit on all of these streets 18 mph[1]. We’re going to cost some people an extra 9 seconds getting home, which will cause some traffic engineer to have heart problems, but we’ll have successfully produced some real live residential streets.

Unlike typical calming, we’ve calmed an entire neighborhood and removed some traffic, including the worst traffic, yet it all remains permeable for people walking or riding bicycles.

This neighborhood has suddenly become bikeable and walkable and livable. Hopefully, no more cars driving through at high speed. Streets are quiet and safe enough for kids to play and for everyone to walk or ride around.

We’ve created streets that are sort of a Woonerfs—Dutch streets that are intended to be equally safe and useable for all users and of which a very key element is limiting motor traffic to local access only.

As with anything there’s a drawback. Some residents will have to drive a bit further around the neighborhood instead of through it (but that’s the idea, remember). My guess is that most, while perhaps not overly happy at first, will decide that the benefits of quieter, safer, and more comfortable streets are well worth it.

Now, imagine doing this in neighborhoods across the city.

The Benefits Of Compounding Benefits

Now that we have a more bikeable and walkable city, what’s next? 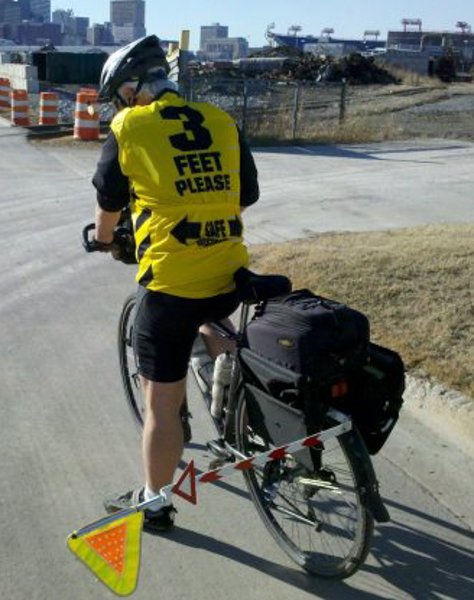 Left: Across the U.S., cyclists think that they need all kinds of gook to help protect them from cars, even when they’re riding on roads with the protection of painted lines and sharrows. With good infrastructure, people in St Paul wont’ feel like they need any special hi-viz jersey’s, multiple flashing lights, warning flags sticking out, amour, air horns, or cameras to catch the scowflouws that buzz them.

If we do this right, people will feel safe and be safe riding bicycles all around St Paul. People of all ages will be comfortable riding to local stores, work, and many other places within a reasonable distance.

Parents will feel safe letting their children ride to school, stores, or the local rec center. Better, only part of this safer feeling, compliments of a safer reality, will be from less fear of their child being killed by someone driving a car. They will know that their children are also safer because there are many more people out walking and riding bicycles who will be keeping an eye on them (thank you Jane Jacobs).

One problem that many residents have said makes their streets less habitable is an overabundance of parked cars. Perhaps if we make St Paul friendly enough for bicycling then more people may choose to not have a car or to be a car-lite family and only have one instead of two.

And that car we added to Summit earlier? Making our streets safer and more inviting for bicycling will result in fewer cars overall, including on roads like Summit or Grand Avenue.

Mark recently wrote a piece on his excellent blog As Easy As Riding A Bike mentioning improvements to Horsham, a town south of London. About 20 years ago, Horsham sort of did what I proposed for downtown St Paul. They created a ring road, Albion Way, around their downtown and made it so that drivers would drive around the ring road instead of through the middle of town.

It created great gnashing of teeth at first, but the result has been a friendlier and more inviting area and is now quite popular. Interestingly, the amount of traffic on the ring road has begun to decrease to the point where they’re considering reducing it from 4 lanes to 2.

Horsham is a bit smaller than downtown St Paul, but the same principles apply.

Back to our pocket neighborhood. Now that we’ve come this far, let’s take our plan above a step further and extend the bollards on Milton and Grotto up across Grand Avenue to Summit.

Instead of clogging up Grand where a lot of people would like to enjoy walking, shopping, and eating, cars will now either stay parked in one spot or go along Summit.

Maybe we should also add some much needed NiceRide stands along Grand.

[1] The lower speed limit is only mildly necessary as many people will drive fairly slow anyway given the short distance. This will be for those who just don’t get it.