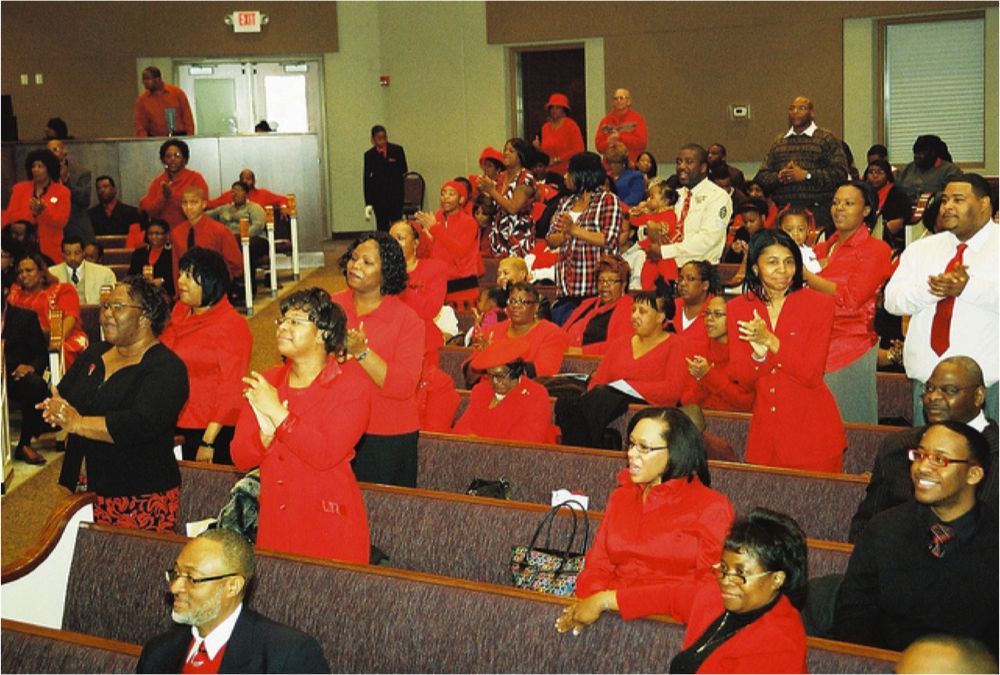 Go Red Sunday in 2010 was part of the Health and Wellness Ministry's emphasis on heart health. (Photo courtesy of Shiloh MBC)

Pastor Steve Daniels Jr. fondly remembers a childhood in West Point, Mississippi, growing up in the church and surrounded by plenty of southern cooking. Unfortunately, he witnessed the toll that high fat, fried foods, and a lack of exercise had on his family, including his mother, who passed away from a massive stroke in 1982. When Daniels became the pastor at Shiloh Missionary Baptist Church in St. Paul some 21 years ago, he noticed not much had changed from his boyhood years. Many in his congregation were struggling with health issues such as diabetes and high blood pressure, but the ramifications of these health issues were not being addressed in the church body. Pastor Daniels saw an opportunity “which the Lord laid on my heart” to use his leadership and experiences to create a space where health concerns could be addressed within the church proactively and openly. Ten years ago, the Health and Wellness Ministry was born at Shiloh MBC.

The cornerstone of the ministry thus far has been smaller informal gatherings, heart health awareness month, and a small health fair. All events are planned and organized by church volunteers. The ministry focuses on ramping up the number of events and outreach in hopes of reaching more of the church’s 3000 members under the direction of its new and highly motivated president, Kelly Robinson, a registered nurse. A March 2012 community health fair at Shiloh MBC offered blood pressure/cholesterol /body mass index (BMI) screenings, health counseling, speakers on stroke and prostate cancer, and a rock climbing wall. Robinson canvassed the community for months, searching for partnerships and organizations willing to participate and donate services.

“It’s all about awareness,” Robinson said. “One woman had to go [directly from the health fair] to the emergency room because her blood pressure was so high — she never knew she had high blood pressure.” As a result, she was put on blood pressure medication and a possible stroke may have been avoided.

Across the Mississippi River, Chicago-born pediatrician Dr. Tamiko Morgan directs the Health and Healing Ministry at Shiloh Temple in Minneapolis. (Shiloh Temple and Shiloh Missionary Baptist Church are separate and unrelated congregations.) This ministry includes a fitness component with weekly walks and fitness classes, health consultations with nurses, and community outreach. As a result of Dr. Morgan’s work in the health ministry and her interest in addressing health disparities on a larger scale, she created a company — 2 Edify, LLC — and wrote a book.

Her newly-published book, VIP: Very Important Patient The African American Woman’s Guide to Health Care, Healing, and Wellness, started with a smaller scope. “I knew I wanted to help people,” Dr. Morgan said. “I was just going to do something local, print it out for free and give it to people in my congregation and other local congregations. Then I said, wait a minute, this could help a lot of people.” The book does address reasons for health disparities in African American women, but it also is a guide for everyone on how to prepare for a doctor visit, preventive screening tips, self-care, and navigating the health care system. The “VIP” in the title refers to her belief that, “Everyone should be considered important. I shouldn’t have to carry a title, it shouldn’t matter who I’m related to, and everyone should get the same type of care.” Dr. Morgan felt that when she was recently hospitalized, she had to mention she was a physician in order to receive quality care and treatment.

According to Azure’De Williams , ASA Regional Health Equity Director for Minnesota and Wisconsin, the Power to End Stroke campaign has seen the Twin Cities Power Ambassador program increase from 98 to more than 220 trained volunteers in the last two years. The program trains lay persons, from health professionals to teenagers, to engage in health outreach within their respective communities.

“It is not difficult to recruit volunteers,” Williams said. “I find that typically what happens is someone is personally impacted by stroke in their family — either they or someone they know has survived a stroke and they see the toll it takes … You have a high interest to get engaged and you want to do as much as you can.” The ASA has a limited number of paid staff, and they rely heavily on Power Ambassador volunteers to spread the ASA message throughout communities. “This is an opportunity for you [ambassadors] to be creative,” said Williams. “You can come up with innovative ways to do outreach in the community. You can do a dinner party or step class with some messaging infused into that session. We try to give them that autonomy to really make the Power to End Stoke movement part of their lifestyle.”

The ASA hopes to continue to build strong and meaningful partnerships in the Twin Cities to spread their important message but, said Williams, Power to End Stroke is really a movment, with a lot of “standout leaders.”

Many minority groups, including African Americans, experience higher rates of chronic diseases like; stroke, heart disease, and diabetes. Minnesota consistently ranks near the top in the overall health of its residents, but has one of the largest gaps in the health status of its minority residents compared to white residents. This gap is often referred to as a “health disparity.” Reasons for health disparities include social and economic factors such as lack of access to quality health care and insurance, education level, income, and health behaviors.

Shiloh MBC and Pastor Daniels envision a ministry that has an increased presence in the church and community. “If the Lord keeps blessing us the way he ‘s been blessing us, the health and wellness ministry will be a very powerful entity here at the church, not just reaching across the pulpit,” said Daniels. “We will have a department and staff, to give back to the community and give back to people, and we will have the facilities here at the church to do that.”

On October 17, in conjunction with the ASA and Health Partners, Shiloh MBC will host a free health fair and concert featuring popular gospel artist and pastor Dr. Marvin Sapp, all in hopes of bringing the entire community one step closer to a healthier lifestyle. Last year’s event drew more than 800 people.

In Minneapolis, Dr. Morgan also hopes to move beyond her own church pews. “I want to be a motivator for change,” she said, “to see people feel better and advocate for their own health. I would definitely like to take my message across the world. The book is just a tool and a vessel to do that.”