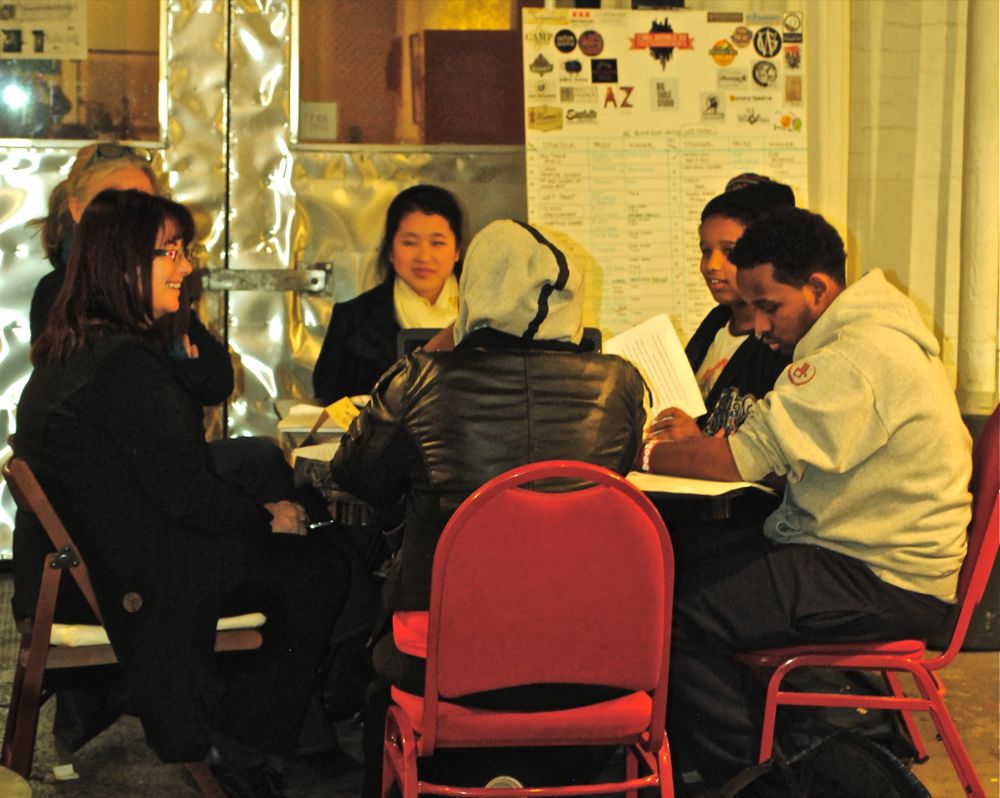 We gather Tuesday evenings and sit at tables set up for us in the AZ Gallery in Lowertown, St. Paul. We are community editors for the 2013 edition of the St. Paul Almanac, an annual publication that is both a literary and literal guidebook to the city of St. Paul. There are 21 of us and we represent St. Paul and its diversity of ages, cultures and abilities. Our work, at this stage, is to sift through hundreds of poems and stories, submitted by amateur and professional writers, and to rate them. The process will eventually lead us to winnow out most until we have selected fewer than 100 for publication.

On a recent December evening I found myself at a table with a group of younger editors—I’m out of high school. Cade (pronounced Ah-day) was the moderator at our table. He looked over our list of more than 35 submissions that we had prepared to discuss and announced the title of the first one. He gave the story a rating of  “two.” He explained that he liked the idea behind it but thought that the story went on too long and became predictable.

Our discussion was launched and quickly became lively. Our common language was based on the almanac’s “Community Editor Rubric.” The numbered standards guide us to look for stories about St. Paul (not that other city across the river) and to give high marks when the work is specific, fresh and thought provoking. We eliminate works we agree are sexist or racist. We are respectful toward the writers (whose work comes to us without names attached) but the b-word occasionally comes up –“This story was boring.”

KaBao offered some insight when we read a story about a girl from a Hmong family who falls in love with “a white boy” and her family disapproves. Ilhan, with a red scarf peeking out from beneath her black hijab, said that she could relate, it is sometimes similar in Somali families. The conversation ebbed and flowed. Najib admitted that the story about an iron lung puzzled him. It turned out that no one besides me at the table was familiar with one. However we were all familiar with polio. A story about the state fair struck me as ordinary but it “wowed” Cade. He argued that for families who have recently arrived in Minnesota — everything about the state fair is new and interesting.

“Some people find this process frustrating,” said publisher and founder of the nonprofit St. Paul Almanac, Kimberly Nightingale. “I’m addicted to it. In the end – good things happen.” A key part of the process requires community editors to seek submissions for the almanac in the first place. Community editors are encouraged to submit their own work and to go to their families and communities for stories. Nightingale said, “This has to do with citizen and resident power. There is so much intelligence and thoughtfulness in our community.”

What sets the St. Paul Almanac apart from other literary publications is its open-to-all welcoming aspect. Nightingale, who has a long history in publishing, describes the business as one dominated by a white, educated class of people. She stated, “The St. Paul Almanac addresses the opportunity gap.” Community editors are welcomed and recruited from diverse backgrounds. In addition to a nominal stipend for their work, they receive training in publishing. Each editor receives a copy of the hefty Chicago Manual of Style and weekly meetings include speakers on topics ranging from poetry and prose writing to copyediting and copyright law. Nightingale said, “If you’re a writer, it’s important to know editing and publishing.”

As community editors prepare next year’s almanac, the 2012 (6th edition) is already out and for sale in bookstores and gift shops around the Twin Cities. It puts the work of new writers in the same pages as that of St. Paul’s literary greats such as Garrison Keillor and Max Shulman (they submit their work to the editors like anyone else).  Also, like any good almanac, it has a calendar with space for notes and serves as a guide to St.Paul’s places and events. The St. Paul Almanac website is fully interactive with updates about events in the city, including monthly St. Paul Almanac reading jams. These events often feature community editors who have work published in the almanac.

I can already picture my editorial colleagues reciting a piece of their own work some future evening at the Black Dog Coffee and Wine Bar. I’ll definitely be in the audience — applauding.