My friend Liz has a theory: When December approaches and there is no snow on the ground, recently retired St. Olaf College Pastor Bruce Benson picks up his red phone, the one that sits on his desk next to the regular old black phone and is only used for special calls, and tells God we need a white Christmas Festival.

We got just a dusting Wednesday night and into Thursday morning before Liz and I undertook the hour drive to our alma mater to once again take part in the celebration, this time as alumnae. In my memory of Christmas Fest—dating back to 2006—it has never not snowed, and I was worried we would have a brown celebration this year. But as Liz said when the first flakes began to fall on Wednesday, “Benson is so good.”

This year was a significant Fest for Pastor Benson, as it was for many others. He retired as St. Olaf’s pastor last year, and narrated the festival for the last time this year. Dr. John Ferguson, the Elliot and Klara Stockdal Johnson Professor of Organ and Church Music and director of the St. Olaf Cantorei (one of five choirs performing in Christmas Fest) also plans to retire at the end of this year. On top of the departure of these fixtures in the school, this year represented the one-hundredth anniversary of the St. Olaf Christmas Festival, a celebration that began with a handful of musicians in a dormitory chapel and evolved into what the New York Times International Datebook has called one of the most significant holiday events in the world.

This Fest was a new kind of experience for me, too. As a member of the Manitou Singers (the first-year women’s choir) for one year and then Cantorei for three, this was my first time as an audience member. This really hit home when I was trying to decide what to wear. I used to just put on as little as possible under my portable sauna of a choir robe; Gym shorts and a tank top composed my standard Christmas Festival outfit. I had heard rumors of guys wearing nothing at all but black socks and loafers under their robes. My robe could once have been worn by someone who went commando, but I tried never to think about that.

Now I had to assemble a reasonable outfit. Was a nice pair of jeans too casual? Would a skirt in 20-degree weather be going too far? I had always been so distracted by the Norwegian sweaters and what tundra animals could be found leaping across them (the St. Olaf bookstore even sells Norwegian sweaters adorned with the college’s lion mascot) that I rarely noticed what people were wearing below their waists. Sweater counting is one of my favorite Christmas Fest pastimes, so, after deciding on the skirt (with tights for added warmth), we arrived on campus and I reengaged in the great sweater hunt as we visited some new buildings and moseyed toward dinner. 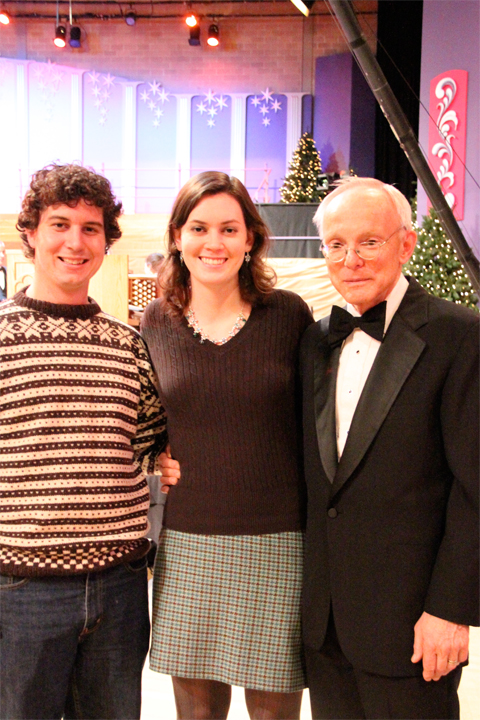 Part of the Christmas Fest tradition is to dine in the cafeteria. If you’re wondering why, that must be because you have never eaten in the St. Olaf cafeteria. It’s the kind of place you take for granted and then miss when you graduate because it’s just that good. The Caf lays out a delightful Norwegian spread for Christmas Fest, serving foods with names like rommergrot and King Haakon cake.

You may not think of Norwegian food as exciting, but you’ve never tried fruit soup. My soup had an entire orange slice in it, complete with peel. It also contained something with a shape and texture remarkably like a twig. In fact, I’m pretty convinced it was a twig. It was tasty soup, but no one could accuse it of being boring. And then there’s the lutefisk. Lutefisk is more popular among immigrants than it is in Scandinavia (I say Scandinavia because we can’t only blame Norwegians for lutefisk). Norwegian and Swedish immigrants to the Midwest needed to get cod across the country without it spoiling so they soaked it in lye, that inflammable, burning, blinding poison. Then they soaked it in water to get the lye out, turning it semi-gelatinous, and cooked it very carefully to keep it from falling to pieces from all that water. People still choke down Lutefisk every Christmas out of some sick sense of tradition. Some even claim to like it, but if you smelled it, you would know they were lying.

But of course Christmas at St. Olaf is about more than just sweaters and food. It’s a celebration of the birth of a humble child in Bethlehem 2,000 years ago, and what a celebration it is. The directors begin planning the musical program in January, not much more than a month after the most recent festival has ended. Beginning each October, the students add mass choir rehearsals on top of their individual choir rehearsals, not to mention the scale of the logistical preparation of sales, marketing, grounds crew and others. The festival is simulcast to movie theaters nationwide, broadcast on Minnesota Public Radio, and filmed every few years for television.

In Skoglund Center, a gymnasium almost completely transformed into a concert hall thanks to alumna Judy Seleen Swanson and her design team’s perennially lovely decorations, nearly 600 musicians gathered once the crowd was seated. Cell phones beeped their turning-off sounds and people coughed as the lights dimmed. And the St. Olaf Orchestra began the one-hundredth annual Christmas Festival with Edward Elgar’s “Adagio ‘Nimrod.'”

This was a filming year for PBS, which happens about every five years and then the same program re-airs each season until the next filming year. My sophomore year was filmed and just about every December since then someone has said to me, “My mom saw you on TV. They zoomed right in on your face!” This was actually sort of fun, but it’s time to allow a new generation of Oles to have the joy (or horror) of singing on television. I counted six cameras in conspicuous places, and the camera in front of our section caused some minor distraction, but nothing unforgivable.

The music dazzled, as always. Two mellow joys stood out to me: “Infant Holy,” a gorgeous Polish carol arranged by Paul J. Christiansen and sung by the St. Olaf Chapel Choir, and “Christ the Apple Tree,” composed by recent graduate Stanford Scriven and sung by the St. Olaf Choir. Ralph Vaughan Williams’s “Ring Out, Ye Crystal Spheres,” set to a grand poem of Creation by John Milton and sung by the massed choirs, provided a thrilling climax to the program. The carols sung with the audience may have been my favorite, in part because I was able to participate, and also because at St. Olaf the audience actually sings when they’re told to, and they do it joyfully.

I noticed nothing remarkable about this centennial celebration, though. It seemed like any other Christmas Fest except that Dr. Ferguson got a bouquet and an extra ovation at the end. In fact, I wouldn’t consider this year among my favorites out of the five that I’ve attended or participated in. That doesn’t mean it was anything less than excellent—so much work and energy and talent go into Christmas Fest that I don’t believe a poor performance is possible—I just expected something extraordinary for the anniversary.

Then again, I may not have been moved by the music as much as usual this year because I may have been thinking about the fact that I would never again roast in one of those awful robes, or make the risers squeak while shifting position during the hours of dress rehearsal, or lose my voice after the Sunday matinee. I am adjusting to a new Christmas Festival experience, and this will take time.

All the meticulous planning and hard work exist to create this intimate and deeply personal experience for each listener. This concert was not one of the most moving in my memory, but it certainly was for someone in the room, maybe the man sitting next to me. As he bobbed his head to the music I recalled my first year at St. Olaf. All of my friends remember a piece that first year men’s choir Viking Chorus sang that year: “The Word Was God” by Rosephayne Powell and arranged by William Powell. It’s a great song, but F. Melius Christiansen and R. M. Larson’s arrangement of Finnish folk tune “Lost in the Night,” Viking’s less popular piece that year, is much dearer to my heart. I had endured two deaths in my family that semester—my grandma’s in October and my uncle’s just days before Christmas Fest—and I felt lost in the night. While Viking sang “Will not day come soon?” I sat in the shadows and wept. “Lost in the Night” has faded from collective memory, but it will never fade from mine.

That’s the thing about Christmas Fest. It means something different to each of us depending on where we come from and what matters to us. And it’s so much more than just the music. It’s about the experience—the way we experience it as individuals and the way we share that experience with the people sitting next to us and the ones we love. My experience has changed in a way that I haven’t quite adjusted to yet, but that won’t stop me from coming back.

The program always ends with the choir standing in the round, surrounding the audience, singing F. Melius Christiansen’s arrangement of the Silesian folk tune “Beautiful Savior.” The last day of Christmas at St. Olaf 2009, my senior year, (the best Fest ever, in my biased opinion). I was blessed to end up standing near where my family was seated, so there was a chance they could hear my voice among the masses. When the applause finished an older man who had been seated behind my family leaned over to me. He cried as he thanked me for the best Christmas Festival in his memory. He had been coming for over sixty years. I choked out my appreciation as I turned into smeared-mascara mush. I hope and believe that somewhere in that auditorium on Thursday a similar scene played out, because that’s what Christmas Fest does—it celebrates tradition and family and Christmas and joy.

My friend Caroline’s parents have made an annual Christmas Festival pilgrimage from Pittsburgh since our freshman year, even though Caroline hasn’t joined them since 2006. It’s a new tradition for them. That’s the kind of devotion it can inspire—flying across the country like Caroline’s parents or coming for sixty years like that man I met my senior year. So watch the St. Olaf Christmas Festival on TV this year, but if you ever get the opportunity to make the trip to Northfield and experience it for yourself, don’t let it pass you by. Traipse through the snow special-ordered from Heaven by Pastor Benson, try the Lutefisk if you’re brave enough and your family doesn’t abandon you because of the stench, and bask in the most beautiful Christmas music you will ever hear. But be careful—it might just become a tradition.