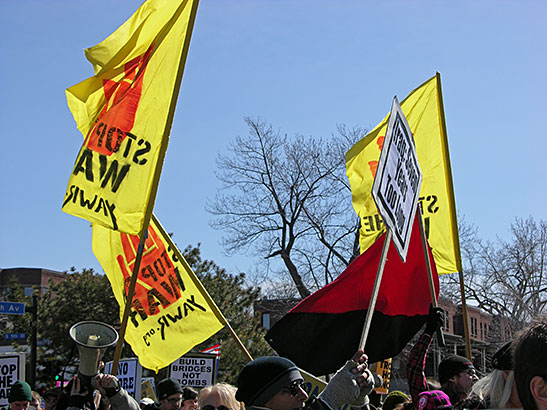 Demonstration –  A gathering and marching of people opposed to the wars we are involved with as a nation – Not in our name. On March 20th, 2010 war protestors gathered together to denounce the violent actions of our government. Depicted here are scenes from the West Bank Cedar-Riverside area of Minneapolis Minnesota USA, on March 2, 2010, between 12:45 and 2:30 pm.

It was a pleasure to be around a crowd of people that resented our tax money being used in war machinery. Until no one profits from war, some one is drawn to desire war. We must stop people from profiting from war making. Even conservatives will benefit from spending less on the military. Unless they are war profiteers. The Radical Roosters made another Showing

An appearance of a newcomer, some Navi made a statement. But matters are serious And we took to  the streets, and had a wonderful spring walk Stop the violence   End the Wars

As a nation, let us denounce the use of force in any conflict. Let us lead in example as individuals.

Peace begins with me. Images are released under a Creative Commons Attribution-Noncommercial-Share Alike 3. Additional images at my website alanwilfahrt.com/photo_journal.html