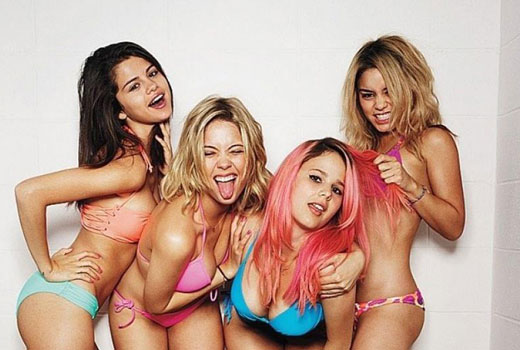 If Harmony Korine’s Spring Breakers is nothing more than the greatest spring break movie ever made, the film makes its own case for that as a noble achievement. In its virtuoso opening act, Spring Breakers paints the spring break road trip as one of the great American journeys, along with the wagon ride west and the shot into space.

Korine’s engrossingly itchy style, with jump cuts layered back-and-forth on each other so that scenes and soundtracks overlap, blends with Skrillex’s score to dramatize the restlessness of four college women (Selena Gomez, Vanessa Hudgens, Ashley Benson, and Korine’s wife Rachel) who fund their spring break escape by robbing a restaurant.

The girls’ crime is born of listlessness, and those who have seen the trailer might be surprised to learn that the spring breakers start their crime spree entirely of their own volition—though they later encounter dangerous men, they don’t need those guys for inspiration. An alternate title for the film might be Caril Ann Fugate Unchained.

The film’s headlong embrace of the spring break mystique—buff guys holding topless women up for keg stands, then licking coke off the girls’ taut stomachs and taking their time about it, everything sun and smiles and gleeful debauchery—is so unapologetic that it either defies critique or contains its own critique, depending on how you’re inclined to see it. Even before they leave their dorm, the eponymous quartet are in high heat, doing sweaty somersaults in their lingerie and piling their dirt-streaked bodies atop each other in beds covered with cash.

Once the spring breakers get to St. Petersburg, Korine deftly shifts gears and lands the girls in a jail cell, sober and hating it. They’re bailed out by a local hustler/MC who calls himself Alien, played by James Franco with gold teeth, cornrows, and a southern drawl as shameless as the T&A surrounding it. He introduces the young fugitives to another Florida, where there’s even more money and even more drugs but where there are also guns and dogs and guys who don’t bother to offer a bong hit before grabbing your ass.

Hudgens, Benson, and Mrs. Korine are fascinated and seduced by this Alien world, but Gomez has her doubts, and the film hits a gripping peak with an ominous scene where Alien forces Gomez to make a decision: to bail out, or to take spring break to its logical extreme.

After Gomez makes her decision, the film jettisons the baggage of its heretofore-riveting plot and continues on as a virtuoso piece of mythmaking that we still can’t look away from, even if we stop caring what happens to the characters. Korine flirts with emotional resonance in a couple more scenes, but Spring Breakers never recovers that uneasy tension.

The film was destined to be iconic even before it was released, and Korine’s deft control of pacing and tone makes it an unforgettable experience in many respects. Korine’s screenplay for the controversial 1995 film Kids brought the horror of AIDS to the attention of a generation that had largely thought of HIV as something you only risked contracting if you were gay or got a blood transfusion; Spring Breakers can be seen as a bookend to the subsequent era in which Generation Y grew up, with Korine ready to deliver another cold splash of reality as soon as Disney kids Hudgens (b. 1988) and Gomez (b. 1992) came of age. By most definitions, today’s 13-year-olds are Gen Y’s rear guard, which means that it’s now open season for generational self-definition.

Casting Gomez as well as Hudgens (of High School Musical) and Benson (of Pretty Little Liars) guaranteed that Spring Breakers would be a pop culture sensation, but whether it’s a generational bellwether will be for history to decide. If the current spring-break demographic embraces the film, it will be a sign that Millennials—once thought to be the next Greatest Generation, full of personal responsibility—are continuing to outdo even the bar-setting Generation X in the department of detached disaffection.

In the 1960s, Gidget went to Hawaii but never went wild. The 80s had Fast Times at Ridgemont High, with nudity that could still shock (“How could they do this to Jennifer Jason Leigh?” asked Roger Ebert). Britney Spears eventually got down and dirty, but first stopped to make the laughably naïve Crossroads; the Spears oeuvre is referenced multiple times in Spring Breakers, which features four young starlets who already have photos ranging from a few topless-sunbathing paparazzi shots (Gomez) to a multi-year library of leaked selfie nudes (Hudgens). If they toss more screencaps onto the pile, who cares?

Reactions to the film’s treatment of race will also be telling. Non-white faces are few and far between (authentically, I presume) among the college-party crowd in Florida, but the underworld is largely black. Franco’s nemesis is a kingpin played by Gucci Mane, speaking in completely flat tones whether he’s threatening murder or offering suggestions to the curvy ladies who mount him in a threesome that’s staged in counterpoint to Franco canoodling with two of his skinny white jailbirds. Is this a gag? A sociological observation? Something Korine thought up while stoned? Spring Breakers declines to tell the viewer what to make of the climactic conflict, as we might expect from a filmmaker who’s also responsible for an art installation—featuring a man in blackface and a satanic youth—titled The Diary of Anne Frank Part II.

In time, Spring Breakers could come to be seen as the first nostalgic film about the spring break legend, much as The Searchers was the first nostalgic Western. What happens when you get to the beach and the only bad decisions you haven’t already made are those that might get you shot? As Gidget’s boyfriend Moondoggie might say, that’s a total zonk on the head.