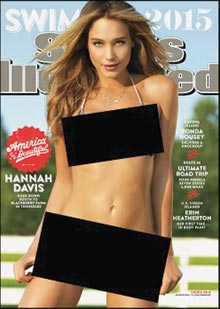 Voice your opposition at endsexualexploitation.org/SI

Hannah Davis is an athlete – a tennis champion and a volleyball player. But that’s not why she is on the cover of Sports Illustrated magazine’s March issue. It’s the annual swimsuit edition, and she’s the model.

For years, women and some men have complained about the skimpy bikinis on the cover of the March Sports Illustrated. This year, many people are in an uproar about the scarcity of the bikini – there’s not much there. But it’s also about the pose. Many have labeled it pornography – with her two thumbs pulling down the already nearly nonexistent bikini bottom and her pelvis thrust forward.

Some have concerns that the magazine will be at ground-level display in supermarkets, gas stations, bookstores and airport kiosks for any child to see. The National Center on Sexual Exploitation sent letters to many major retailers demanding that this magazine be removed from public display.

Does it matter? Isn’t this image of women just the same old, same old?

Yes and yes. That’s the problem.

The more we as a culture see women as sexual objects, the more that attitude is normalized. The more women are seen as a body to gaze at rather than as a competitive athlete or an intellectual with ideas, the more all women are devalued. And the more girls grow up seeing what our culture expects of them.

In this March issue of the Minnesota Women’s Press, the theme is “Word Women.” We recognize the value of women’s words. That’s not to say that we can’t be beautiful, sexy, strong and athletic, but women are also smart, political, thoughtful and caring.

We are whole beings. Our ideas matter. Our perspectives matter. And our words matter.

[Check out this edition of Minnesota Womens’ Press here: http://www.womenspress.com/main.asp?SectionID=2&SubSectionID=24&ArticleID=4714]