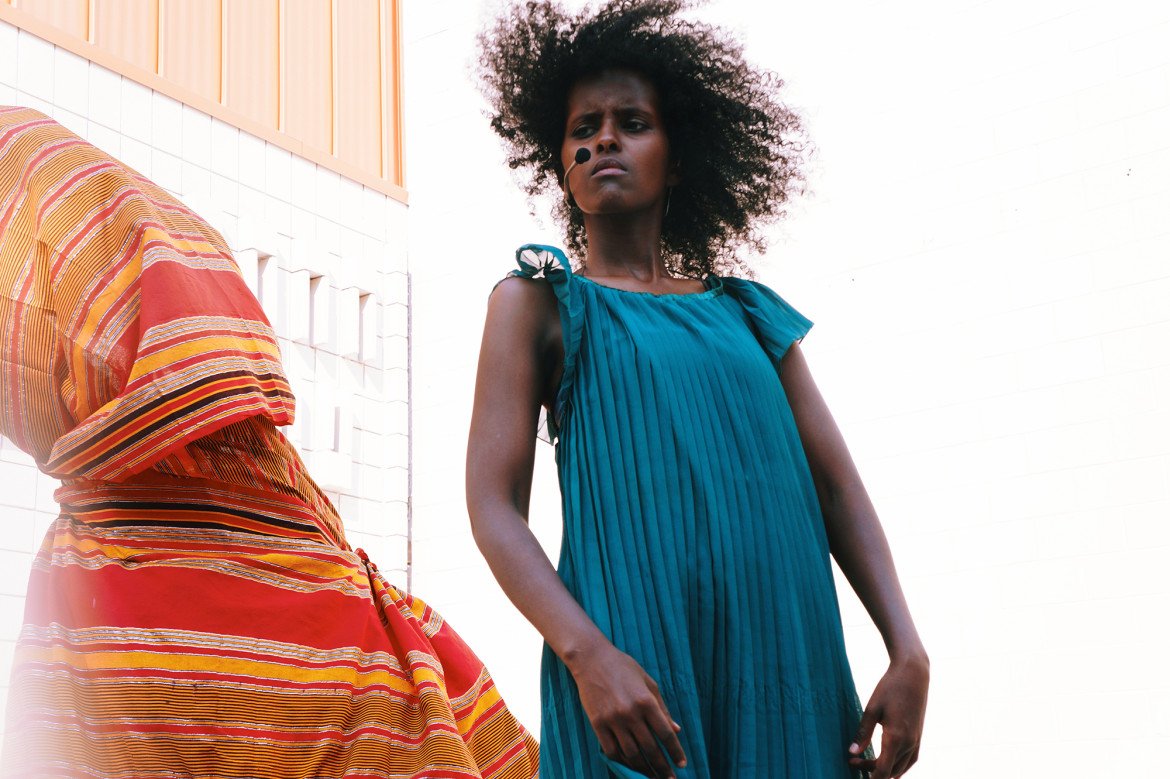 All photos taken by Brea Lobley

Among the games, rides, various foodstuffs on a stick and the Black Lives Matter action at the Minnesota State Fair were two female artists—interdisciplinary mixed media artist and performer Ifrah Mansour and the late “Seed Queen” Lillian Colton—who offered poignantly moving and still images of what it means to be a Minnesotan.

Colton, whose work has been at the State Fair since 1966, is undoubtedly a popular display and epitomizes the State Fair tradition. Colton took a very gendered tradition, women as gatherers, and transformed it into fine art—and, in the process, gave herself and other crop artists a space to express a complexity to an agricultural background that may have otherwise been overlooked.

And she certainly deserved her praise: Colton’s lifelong work of using seeds as an art medium offered a transformative perspective and complexity for the way Minnesotans and non-Minnesotans alike view agriculture.

A stroll down Cosgrove from Colton’s exhibit, over at the Education building’s courtyard, was Mansour. A newcomer to the State Fair, she told a refugee’s tale about the beauty and tension of a child’s perspective in the midst of the sudden changes catalyzed by civil war. It was beautiful, energetic and moving, but a less-often heard Minnesotan tale. 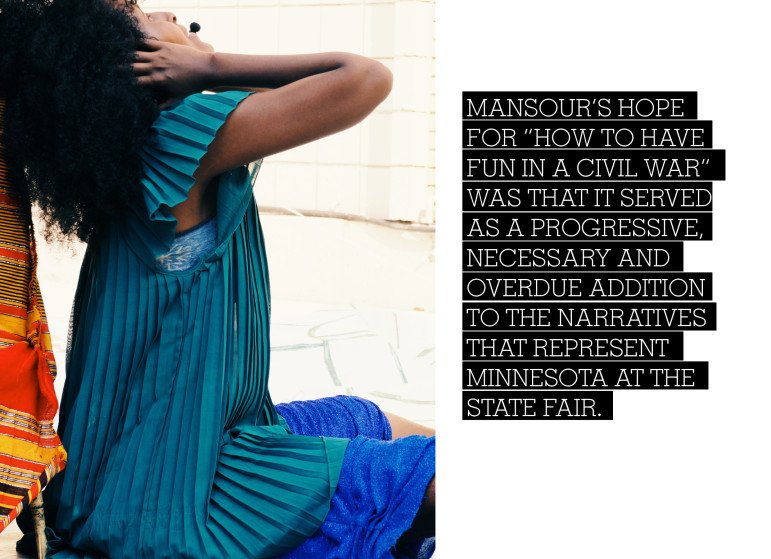 Mansour’s one-woman show speaks eloquently to her life and to a great number of Minnesotans who are refugees. Playful, insightful and powerfully nuanced, Mansour draws the audience into the daily routine of a child who has to learn to adjust to the environment of war.

In an interview, Mansour stated her excitement, her honor and her anxieties about performing at a venue such as the State Fair: “It does feel like it’s something that folks don’t know what to do with it, so I’ve been seeing those blank faces, I try to interact with the audience and show them that ‘hey I’m a six-year-old and this is my daily routine and wait! My day completely changes.’”

“I’m hoping that people receive this as a way to connect with the thousands of East Africans and people who are coming with refugee stories, or coming from civil war histories, that they can understand their neighbors better, that’s the hope that I have.”

There was a particular guest who touched Mansour’s heart with her heartfelt comment: “This lady waited in line for the longest just to tell me that she was in tears while watching my performance. And she doesn’t have a refugee story.”

Mansour’s hope for “How to Have Fun in a Civil War” was that it served as a progressive, necessary and overdue addition to the narratives that represent Minnesota at the State Fair. The state of Minnesota has come a long way in terms of ethnic and racial population growth since 1856, when the very first Minnesota State Fair was held. It would be irresponsible, to say the least, to continue the tradition of the Great Minnesota Get Together with only a specific margin of the population being fully and accurately represented.

As compelling as Mansour’s tale was—and is—it was unfortunate that people got up and left during her performance.

If the State Fair is truly The Great Minnesota Get Together, then a certain level of compassion, empathy and willingness to be challenged in new ways is necessary to bring solidarity across Minnesota. Not a single Minnesotan from any neighborhood or racial, ethnic and/or religious background needs to be a refugee to be personally affected by beauty and complexity of a child’s imagination as she shares the love, the quirks, the challenges and adventures she encounters as her life undergoes sudden and complex changes. Many people have a story of growing pains and how they coped as child.

The unwillingness to listen and understand by a majority of white fairgoers, who seek a “Disney-fied” entertainment experience, however, is nothing short of the passivity that the State Fair can breed into people when there is no expectation to consider the lives of Minnesotans of color.

It’s the passivity of the audience that is the vast majority of State Fair goers that is alarming.

The reality is both Colton and Mansour are a part of what makes Minnesota what it is. Regardless of how American nationalism tends to be racially exclusionary—and Minnesota is no exception to this exclusionary mentality—both women are pillars in the community. Both women allowed themselves to experience a level of vulnerability that is not only valued, but that is at the core of viable traditions. Because traditions are an inherent aspect of culture, traditions have to be flexible and subject to change because culture is not stagnant. Therefore, for real progressive community and tradition to exist—and Minnesota seems to pride itself on its progressivism— tokenizing or erasure has no place in how people interact with one another, and ultimately invest their time, money and energy. 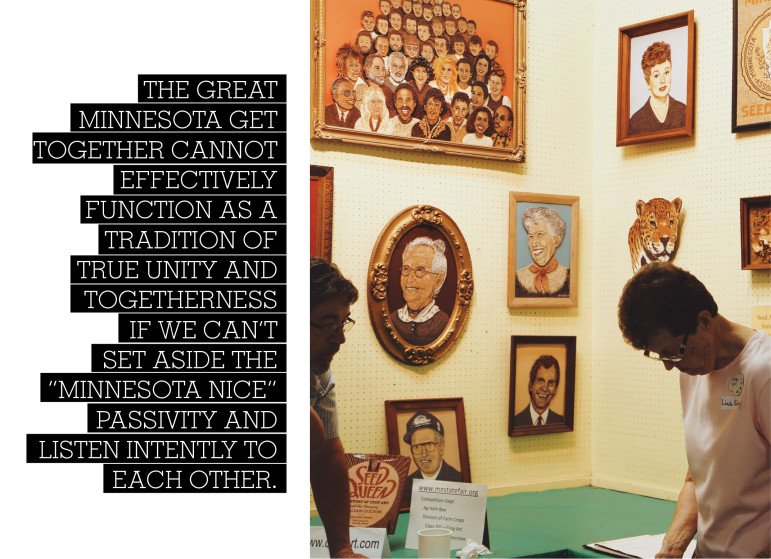 The Great Minnesota Get Together cannot effectively function as a tradition of true unity and togetherness if we can’t set aside the “Minnesota Nice” passivity and listen intently to each other, whether we communicate through our handmade mosaics that show our agricultural roots, or we display the irony of children playing with tanks and finding a new home halfway across the world, or if we come marching six hundred strong with a clear mission to never be silenced again.

The Minnesota State Fair can continue to be a place where you can taste a plethora of foods on a stick, but it also needs to be a fluid tradition where we can find real and meaningful diversity and true engagement of community issues—in both art and civil disobedience.

After all, that is the meaning of being a Minnesotan, yeah?