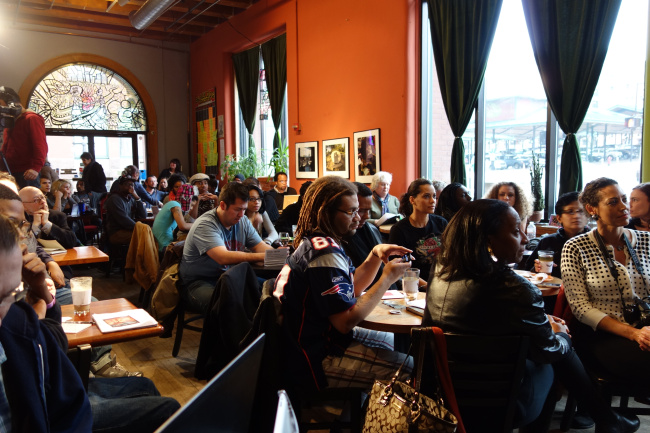 Wednesday evening, eight of the Twin Cities’ youngest and most talented spoken word poets performed the work that they will pack up and carry with them to Chicago for the Brave New Voices International Youth Poetry Slam Festival, August 7–11. The event at the Black Dog Cafe was organized for the Lowertown Reading Jam, a Saint Paul Almanac poetry series. 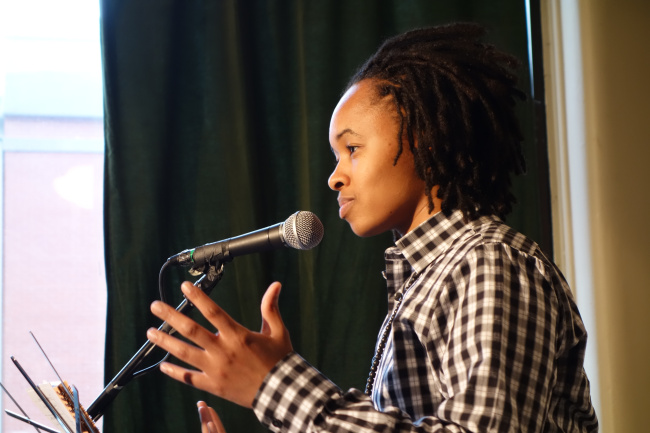 The host for the evening and coach for the team of young poets, The (K.)N.E.W. MN Youth Slam Team, is Tish Jones. Her organization TruArtSpeaks conducted the talent search through a series of competitive events that culminated in a slam on March 29 at Heart of the Beast Puppet & Mask Theatre where these six artists and two alternates were chosen to attend the International Youth Poetry Slam.

True to its roots as outsider art, pushing boundaries with youthful intensity, the top eight artists, to quote Tish, performed spoken word that was “really real.” 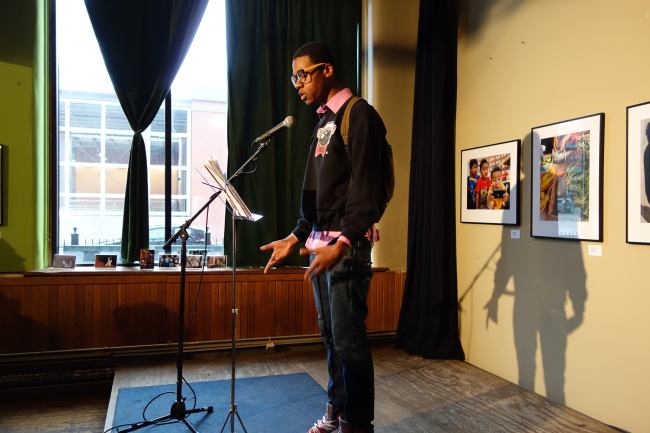 Mika, a long-limbed young man in large glasses, took the mic first. He gestured toward the audience like a preacher reaching out to the flock as he performed “Pronounced Dead at Birth,” his cadence accelerated and he rocked forward on his toes with each emphatic word. The cautionary piece explored the theme of the real life consequences of casual sex, bringing it back in a real (or symbolic) way to himself. 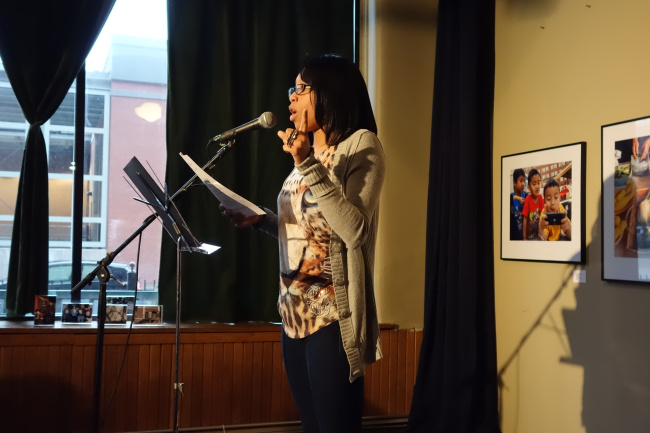 Ramaj took the stage with the same quiet, watchful attitude as the feline pictured on her shirt. Her tone was quiet but steady as she described a horrific assault on a child. The next two pieces were about love or longing for it. Ramaj wove in snippets of the Christina Perri song “A Thousand Years” to sweet effect. 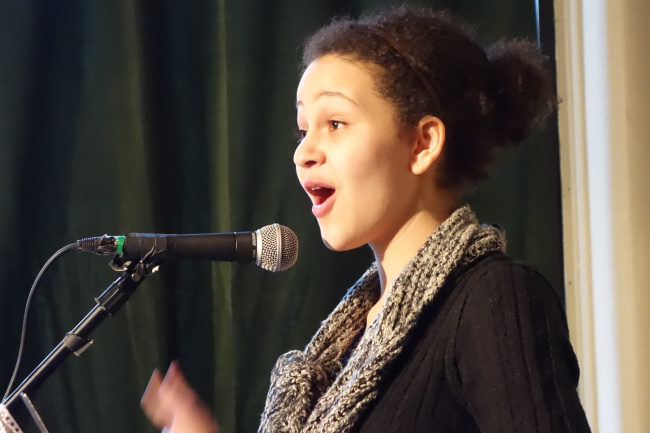 Chava has been chosen as an alternate for the team. She performed two pieces, “Finding God,” a piece that opened with singing and settled into a story that evoked the elusive recognition of God in life’s small and gut-wrenching large moments. “Mia” was a dialogue performed in two voices. Chava offered a preface saying that it was based on Pro-Ana Mia websites that promote eating disorders. She wants the piece to shed light on “how people’s body image is lacking in positivity.” 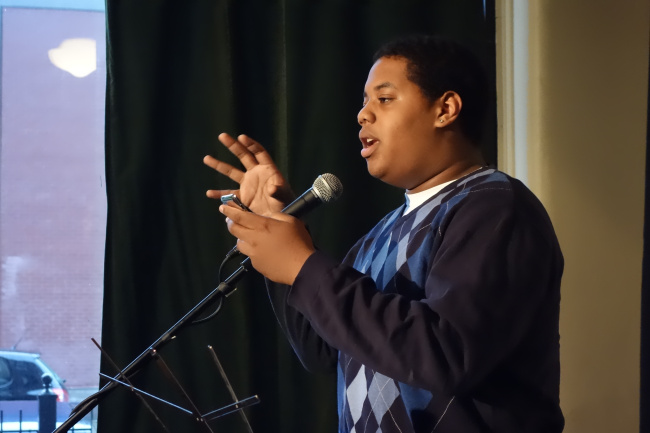 Brimming with confidence, Luke took the stage and encouraged the audience to shout “Whoo” and snap their fingers if they liked something. He raised his smartphone eye-level and used it as a teleprompter. His first piece, “Museum” took a swipe at California culture and the pressure to conform to Hollywood standards. He followed that with “On a Can” about all the product labels, particularly Nike, that create stereotypes he can’t relate to and doesn’t like. 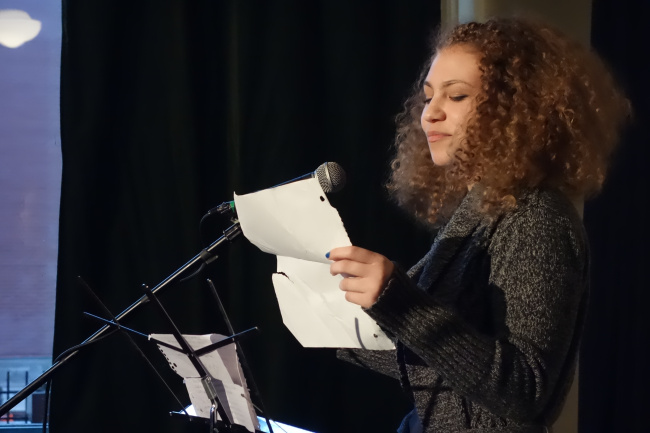 Laresa opened with “My Black is Beautiful,” a spirited rebuke to anyone who doesn’t see her the way she sees herself, “I’m whatever color I want to be.” Her other pieces were love stories, “She Writes Me Poetry” and “Have You Forgotten?” 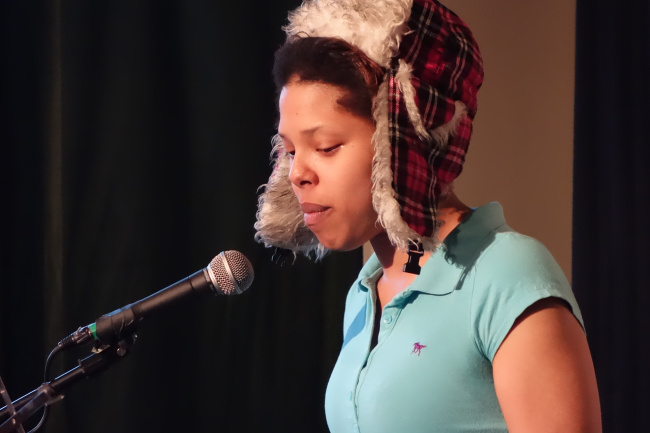 A slim young woman in a red plaid earflap hat came up on stage and launched right in to a piece about reproaching a friend with glowering looks when he brags about taking drugs. Her second piece, which she performed with deep emotion, was about an uncle, whose descent into a sort of madness accelerated to the beat of Kayla’s hands clapping and feet stomping. The tragic end brought tears to many eyes. 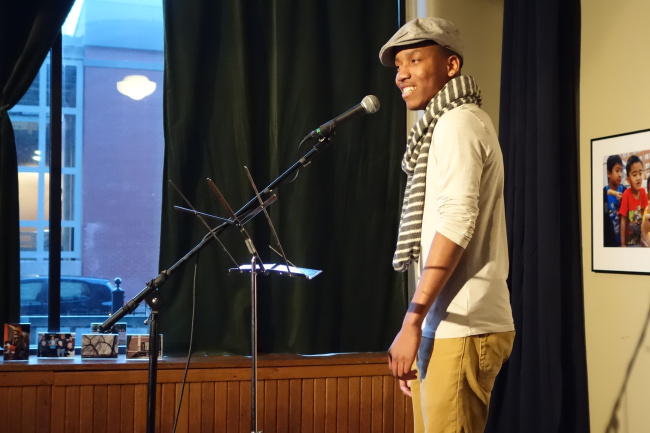 Donte in a rakish newsboy hat and a loop scarf around his neck recited “Old Rondo,” a historic child’s eye view of the largest Black neighborhood in Saint Paul. He also performed a loving piece called “Mother Moon” that praised his mother for her everyday grace even as she cleans floors and does the cooking. Donte was accompanied by Ramaj who punctuated his piece by singing lines from “A Thousand Years.” 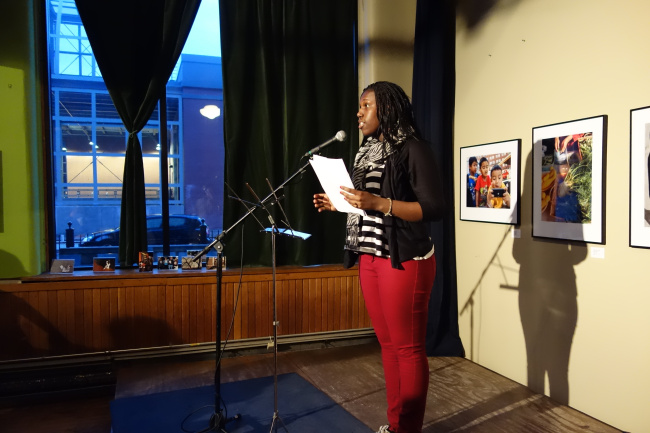 A long curtain of braids swept around Fatima’s face as she stood in front of the mic. She is the second alternate for the team and Tish introduced her as someone who “uses poetry to heal herself and others.” Her piece “Go Home Tom,” was about rapping with her friends on the street one day and being chastised by an older Black man who tells them to stop and “Respect your race.” She argues that rapping and composing poetry is the most respectful thing she can think of doing. Her second piece, called “This One Girl,” was a harsh portrait of a young woman who is addicted to attention from men who don’t really care for her.

The Black Dog was packed with people and more than $400 was raised toward the goal of $5,650 for the team to travel to Chicago. The group will perform again during the HOBT’s May Day festivities. Look for them on May 5. They will be performing on the Folk Stage in Powderhorn Park at 5:30 p.m.