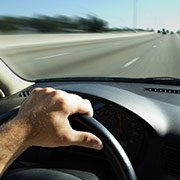 Our culture loves speed. How else to explain the popularity of NASCAR, a spectator sport in which advertising-festooned motor vehicles circle an oval track at ear-shattering intensity, over and over again?

The value placed on velocity affects public policy, too. The most common criticism of the new light-rail Green Line, despite its excellent ridership, is that it’s too slow between the Minneapolis and St. Paul downtowns. And since the repeal of the Nixon-era 55 miles per hour national speed limit in the mid-1990s, nearly every state has jacked up the legal rate.

Most drivers support this continuing trend. Idaho just bumped the limit on some stretches of rural interstate to 80, and Minnesota transportation officials are studying increases to 60 m.p.h. on many state highways, a process championed, interestingly, by the state’s only blind legislator.

This alarms safety advocates, especially those representing insurors who profit from declining collision rates. “The research is clear that when speed limits go up, fatalities go up,” says Russ Rader of the Insurance Institute for Highway Safety. The deadly physics of higher-speed crashes is undeniable, but it’s also true that the two decades post-double nickel have witnessed historic reductions in highway carnage.

Two new studies let us explore this seeming paradox. Our nation’s safest place to drive, tiny Washington, D.C., also has the lowest speed limi—55. Oddly, the only other U.S. jurisdiction that matches it is Alaska, and that huge state comes in worse than the U.S. average for highway deaths per miles traveled.

Meanwhile, Minnesota, rated among the speedier states in a Cars.com compilation, also ranks third best in the nation in fatalities by distance and No. 8 by population, according to a University of Michigan study.

Minnesota’s average speed limit on state highways is 67, middle of the pack and rising, but not as high as top-speed Texas at 78, bolstered by its 85 m.p.h. private toll road, recently declared in default on its bonds. Highways in the Lone Star State aren’t bleeding just money, either. Texas’ 2012 fatality rate, based on distance driven, was more than double Minnesota’s at No. 41 in the nation, compelling evidence that speed does kill.

In fact, though, speed is just one of many things that affect highway safety. I’d chalk up the improvements in recent years largely to safer cars, safer roads and fewer unbelted and drunken drivers. All of these advances have been driven by public policy, at the federal level for the cars, but more so in individual states on the other factors. But even Alaska’s 55 limit hasn’t made it very safe to drive its unique terrain.

If a universal 25 m.p.h. speed limit could be enforced, road fatalities would drop to nearly zero, but at a daunting cost in transportation efficiency. The numbers show that Minnesota, through a broad array of policy, has achieved a fine balance between public safety and the need for speed.