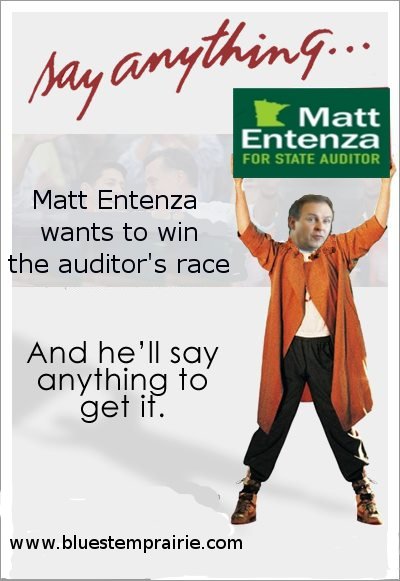 How are things going? Entenza has decided to forego spending limits, and is blitzing his mailing lists with oversized postcards. Both candidates are running television ads, while the DFL primary machine is switching into gear.

And an Entenza complaint about the Otto campaign was shot down by the panel of administrative law judges charged to review the charges.

Ken Martin: Entenza will say anything to get elected

Yesterday’s decision by the Office of Administrative Hearings (OAH) panel to dismiss Matt Entenza’s complaint about a comment Rebecca Otto made on her personal Facebook page is ably reported by Abby Simons in Panel rejects Entenza’s voter ID claim in state auditor race:

A state Office of Administrative Hearings panel rejected claims by Matt Entenza that Minnesota State Auditor Rebecca Otto lied when she said she had not voted for legislation requiring voter identification.

In an 11-page order issued Thursday, the three-judge panel rejected the official campaign complaint filed by Entenza, who is challenging Otto in a DFL primary Aug. 12. Entenza, a former House minority leader, filed for the office in the last moments before deadline, surprising Otto, a former House colleague, and many DFLers. . . .

In a statement issued by the DFL, Otto’s attorney, Charlie Nauen, called the ruling “a complete victory for Rebecca Otto over Matt Entenza’s misleading claims and distortion of the facts.”

“I have never voted for Voter ID,” Otto said in the statement. “In fact, I campaigned against it.”

“Rebecca Otto had it right,” DFL Party Chair Ken Martin said. “Matt Entenza will say anything to get himself elected.”

Perhpas the funniest observation about the finding came in a short quip by Brian Lambert at MinnPost’s Morning Glean:

Maybe he can get her for expired tabs, or insufficient tire tread depth.

What makes folks pause at the word Entenza?

Martin’s statement may hint at the reluctance voters have had to embrace Entenza when they’ve had the chance, as well as one of the reasons we didn’t get the chance to make that call at the polls the last time the St. Paul lawyer was endorsed by the DFL.

Coming off of his service as Minority Leader of the Minnesota House, Entenza was endorsed without opposition by the DFL at its convention in Rochester on June 11. But by July 18, Minnesota Public Radio’s Tom Scheck reported in Entenza withdraws from AG race; sets off DFL scramble:

Entenza’s announcement comes just one week after it was reported that he hired a private researcher to look into Attorney General Mike Hatch, who’s running for governor.

Entenza said he hired the researcher because he wanted to get more information about the inner workings on the office. He later said the researcher went above and beyond his duties when he looked into a parking ticket Hatch received in Dakota County.

Entenza was admitting something that had been posted on Michael Brodkorb’s Minnesota Democrats Exposed in 2005 (the post is no longer directly accessible, but the Wayback Machine has it here). It certainly was lovely of DFLers to get in touch with the then- publicly anonymous Republican blogger and let him know.

The endorsed candidate was also plagued by questions about potential conflicts of interest posed by the Attorney General’s oversight of health care concerns and his wife’s position as CEO of a company subsidiary of UnitedHealth Group. His Republican opponent, Jeff Johnson (now running for governor) told MPR’s Laura McCallum:

“It’s an issue of character,” says Johnson. “I’ve heard a lot of people questioning, what’s the real reasoning behind this, and why didn’t he tell the truth at first, and is he telling the truth now?” 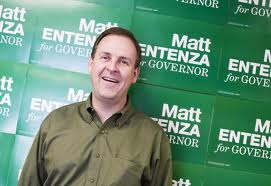 Entenza for Governor in 2010

7. Former House Minority Leader Matt Entenza has done some good work as the head of Minnesota 2020. He has. But I’m sorry — the catastrophic damage done to him by his abortive run for Attorney General is pretty much politically fatal. If he runs, did he suddenly not hire a private investigator to investigate Mike Hatch? If he runs, is his wife suddenly no longer a senior executive for United Health Care? If he runs, will all the issues that swirled around him disappear? Of course not. They’ll just be unfrozen, and used by his Democratic opponents to beat him up with. And if by some miracle he gets through the primary, the Republicans will hit him with them, too. Entenza made his bed; he’s going to have to lie in it. He might be able to make a comeback in 2014. But 2010 is still too soon. It isn’t going to happen.

Fecke remained a fierce critic of the candidate, with his post “Anybody But Entenza” drawing so much spleen from some Entenza supporters that they worked out a plan for a bloggers ethical panel to make sure that campaigns got a chance to respond to critical commentary prior to posting. History teaches us that idea had a shelf life of twelve micro-nanoseconds among Minnesota’s progressive bloggers and campaigns.

Entenza filed the paperwork for a campaign in January 2009, and by April 2009 officially entered the race, saying at the time that if any other DFL candidate ran without endorsement, and he didn’t nabbed the endorsement himself at the June 2010 convention in Duluth, he’d join the primary fray.

It’s a much different approach than jumping into a race on the last filing day after a convention where a candidate was unopposed, as he has this year without expressing interest until the very last day.

By January 2010, it was clear that Entenza would head toward the primary with or without the party’s favor. Mark Dayton withdrew his name from the February caucus straw poll, opting out of the endorsement process entirely. Nonetheless, Entenza came in seventh, with R.T Rybak narrowly easing Margaret Anderson Kelliher out of first place, with Dayton proxy “undecided” taking third place.

By the time of the primary, Entenza managed to endear himself to 18.21 percent of the voters in the DFL primary; he won Nobles County, when he moved at 15, and nearby Lyon County, where his now former wife Lois Quam grew up (perhaps others, though we couldn’t find them in our sampling). Claiming to be a native of rural Minnesota didn’t prove to be much of a draw across the state. (Bluestem looked at that story in our June 13, 2014 post in Narratives: a few more pages from Matt Entenza’s place-baiting Worthington childhood back story.

Because of the reporting deadlines for Minnesota’s constitutional races, it’s difficult to determine exactly what a campaign spent by an election date. Nonetheless, the 10th day pre-general election fundraising reports (January 1, 2010-October 18, 2010; select 2010 here, then candidate’s committee) are instructive. By disbursing $5,649,896.42, Entenza outspent primary winner Mark Dayton, who spent $4,214,803.02, by a cool $1,435,093.40. That’s nearly a million and a half, even though Entenza’s campaign effectively ended two months before.

Somehow, for all his foibles, Dayton had established trust with the DFL base; Matt Entenza, not so much. That money didn’t buy love or votes. Witness Kelliher’s second place finish, with the perks of party endorsement (voter database, field offices, and the like) and $1,230,213.94 expenditures. She came close to beating Dayton.

Bluestem predicts that the party endorsement will work for Otto among the base, while Entenza’s last minute entry–so different than prior, successful primary challengers–and spending will only remind voters why we rejected him the last time he tried this.

In a classic sense, Entenza’s ambition is that flaw against which his great passion for policy is shipwrecked. Were he to continue to nurture MN2020 as a progressive think tank, his reputation would increase. But jumping in on a respected holder of an office primarily given to oversight of local government finances? It resurrects the challenges he brought on himself in the past.

Coming in part II: About that rural thing Matt Entenza says to get elected.

Images: A photoshop of a classic movie poster that was jut begging to be done. Bluestem original (top); Matt Entenza in 2010, via MNDaily; photo by Matt Mead.