The guest of honor at the Minnesota Tea Party Alliance 1st Quarter Event on March 6 in Mounds Views was roasted in Arizona the other night.

Arizona State Rep. John Kavanagh, a Republican from the Scottsdale area, had conservatives chortling with one joke after another about racial profiling, “rounding up Hispanics” and much more. For good measure, he mocked the controversy around SB 1062, the so-called religious freedom bill, taking a shot at Muslims in the process. And he mocked the federal monitor appointed to oversee Sheriff Arpaio’s operations after a judge determined that his department engaged in racial profiling and illegal detentions of Latinos.

It’s not uncommon for roasters to push boundaries. People joke about things that might otherwise be off-limits – sex, old age and a person’s personality and appearance. This was different.

Kavanagh, who made headlines last year for trying to criminalize bathroom use by transgender people, used Latinos as a punch line in one racist joke after another, and the crowd lapped it up. The jokes and laughter, caught in an unguarded moment, reveal why conservatives have such a difficult time connecting with Latinos – there is a fundamental lack of respect. . . .

And this sick schtick should help with the outreach to Minnesota’s Somali community that Republicans like Steve Sviggum have been making. Kavanaugh said:

Soon he was making light of the controversy around the “religious freedom” bill SB 1062, which would allow businesses to refuse service to gay and lesbian couples. Kavanagh, who supports the bill, dismissed the criticism with a joke at the expense of Muslims and Arpaio:

Now a lot of people claim that SB 1062 is gonna cause discrimination based upon religion in Arizona.

And I scoffed at that until tonight. When a Muslim waiter serving up here walked up to Sheriff Joe, wouldn’t give him his dinner ’cause he said ‘I don’t serve swine.’

The crowd reacted with some shock, but not about the Muslim remark. Arpaio covered his face with his napkin. Kavanagh quipped that it “wasn’t quite a burka.” . . .

“I’m not the federal monitor. How many Hispanics did you pull over on the way over here, Arpaio?” Kavanagh joked to loud applause during a roast of Arpaio at the Western Conservative Conference at the Phoenix Convention Center on Saturday.

Kavanagh was referring to the monitor appointed by a federal judge last year to oversee the Sheriff’s Office after determining that deputies engaged in discriminatory racial profiling of Latinos during the office’s immigration sweeps and traffic stops.

The material has been reported in USAToday, Talking Points Memo, and elsewhere. Listen to the audio at the SPLC link.

In addition to his anti-immigrant stances, Arpaio has also been criticized for costing taxpayers a pretty penny. Bluestem first wrote about the March event in America’s most expensive sheriff is no stranger to Tea Parties touting fiscal responsibility.

Minnesota conservative activist Jeff Kolb, who had lived in Arizona, objected to the March Tea Party event in January. He tweeted today: 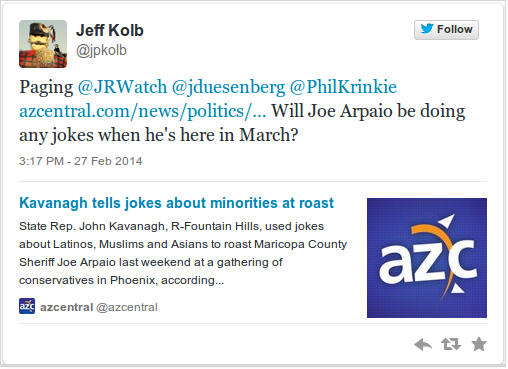