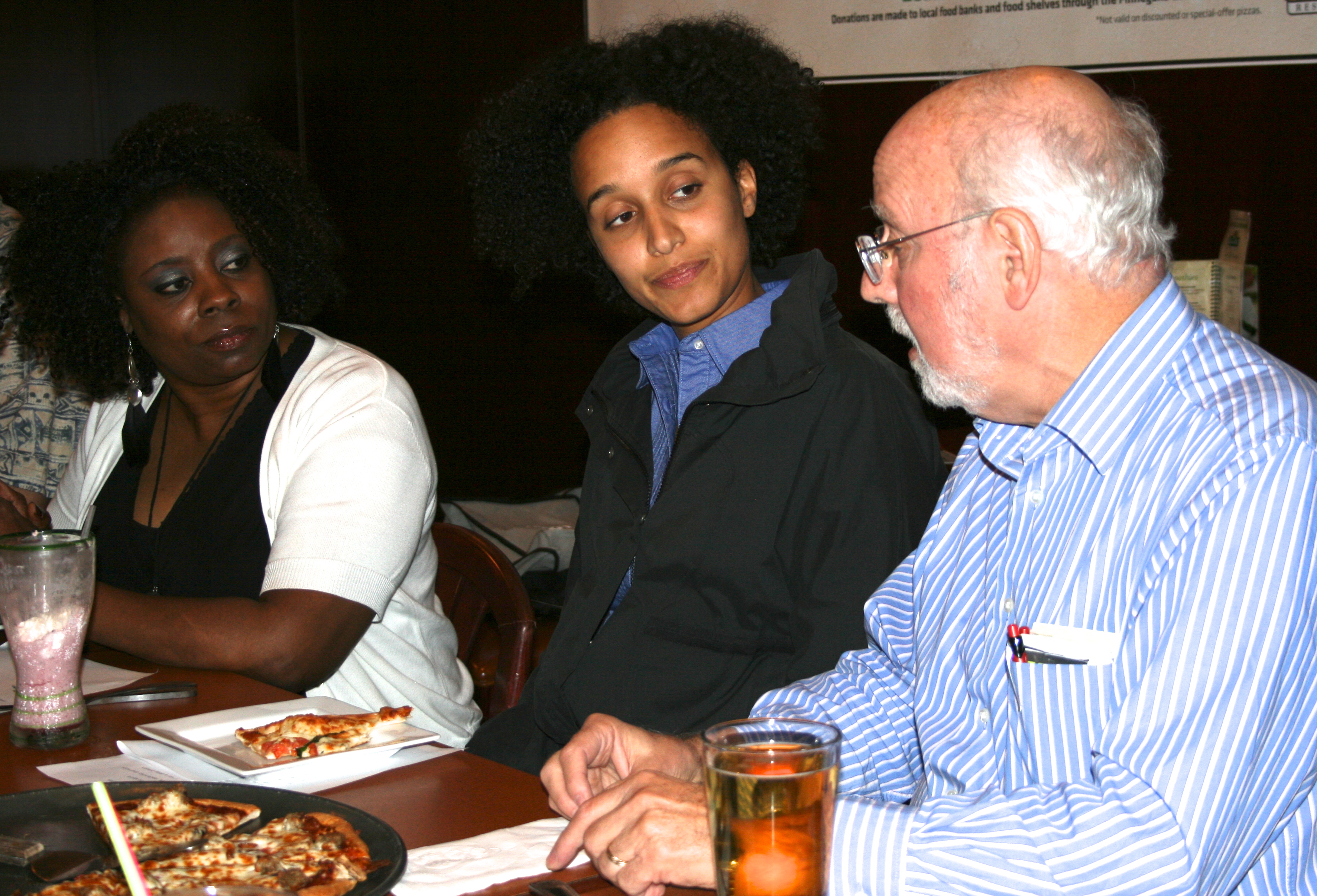 Emotions ran high at times during last month’s TC Daily Planet election circle. The subject of the evening: the proposed constitutional amendments. Everyone attending agreed that the Minnesota Constitution should not be amended to further limit same-sex couples’ freedom to marry. There is already a statute on the books banning marriage between same-sex couples, passed by the legislature in 1997. However, there was difference of opinion over the value and motivations of a voter ID or voter suppression amendment being promoted by Republican legislators.

Among the participants on hand to discuss possible changes to the Constitution were:

Participants were asked at the outset of the evening at St. Paul’s Green Mill, to tell how voting has impacted their life or the life of someone they know. Noting the energy around voting that people at the table conveyed during an initial go-around, Freeman asked everyone to imagine what life would be like if the experience of voting were suppressed for them.

One of OAP’s current initiatives is Voices for Voting Rights, a blog with videos of Minnesotans sharing their stories, produced in partnership with other area nonprofits.

Freeman then wanted to know why the marriage amendment had received more attention than the voter ID amendment.

Bonnifield noted that people have had considerably more time to mobilize to defeat the marriage amendment, an extra twelve months. She pointed out that the amendment “locks a door that’s not even open.” Another participant, Marita Bujold, commented on how the campaign against the marriage amendment has drawn from vast experience in organizing that the GLBT community has gained over the years. 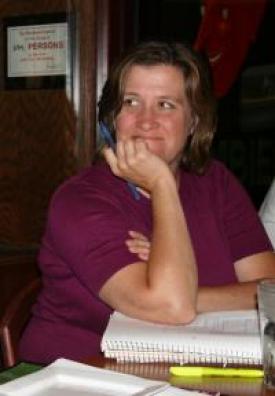 Morales observed that the amendment proposing to deepen the ban on gay marriage “is very clear in terms of who it impacts.” By contrast, measures being proposed in numerous states that threaten to suppress voting among specific demographic groups, “are phrased in ways that don’t seem alarming.” ALEC, the American Legislative Exchange Council, is responsible for crafting language for legislation and constitutional amendments in ways that make ID requirements seem reasonable, he added.

Former Gov. Arne Carlson, a Republican, and former Vice President Walter Mondale, a Democrat, explain that ALEC: “…is the creation of the Koch brothers, who amassed their fortunes in oil and who live in Florida. The goal of ALEC is to influence legislators across the nation.” In its Proposing Constitutional Amendments: A Handbook for State Lawmakers, ALEC promotes the practice of amending state constitutions.

Carlson and Mondale contend that, “The overall goal of this amendment is largely to eliminate election‐day registration, directly affecting more than 500,000 Minnesota voters. The new law will require a government‐issued photo ID listing a voter’s (current) home address. This can be challenging particularly for students, the elderly, the military, absentee voters or anyone who moves.”

Shilepsky countered that, “there’s no conspiracy here.” He argued that the amendment requiring voters to show specific forms of identification, featuring a current address, “doesn’t have anything to do with suppression.” Voting, he said, “is a civic sacrament.” In his role as an election judge, he said it is easier to look people up and sign them in if they present some form of identification.

“If people think voting is important, it’s not onerous to get a proper ID. It ain’t hard,” said Shilepsky.

Other attendees, including Clarence White, begged to differ, noting that there are numerous obstacles to attaining what would be considered legitimate forms of identification, for some populations in particular. Bujold told of a fellow church member helping a friend. The person needed ID, but did not have transportation. After two hours in line, the friend made it to the front of the line, but those behind her were told they would have to return the next day. Jobs, she said, may prohibit some from doing so, and then they’ll be ineligible to vote. Freeman noted that members of rural Minnesota communities are required to travel between 50 and 150 miles.

Because current addresses are required, Morales observed that the amendment, if passed, would impact students. Student ID cards would not be deemed legitimate, and tribal IDs and Veteran Affairs IDs would not meet requirements either. Those unable to supply a proper birth certificate could find themselves ineligible to receive a proper photo ID, a provision that could affect many elderly people who have been voting their entire lives.

Elderly people living in facilities where they’re progressing to more advanced levels of care could also lose their ability to vote, said Morales. So would anyone whose living situations are unstable, in frequent flux. All would find it challenging to meet the requirement of always having a photo ID with current address on it. This would be the case for younger voters, who move frequently, and people whose homes have been foreclosed or those who reside in shelters.

Carlson and Mondale have pointed out the financial burden of such a requirement, too. They have said, “if approved, this amendment will burden state taxpayers millions of dollars more in order to provide free IDs to the thousands of people who will need them. “ “Frankly,” they conclude, “it is hard to understand why we would cast aside election‐day registration, institute a highly complicated two‐ballot system that will cost millions and increase taxes — all to solve a problem that does not exist.”

Bonnifield explained that, with the exception of Mississippi, states have not been embedding voter ID requirements into their constitutions. Morales said that principles are embedded in constitutions, whereas this type of an amendment qualifies as “micromanagement.” Bujold added that Constitutions are about “granting rights, not withholding them.” Based on her experience in Germany, Eva Heithausen wondered why United States citizens aren’t issued national ID cards when they come of age. 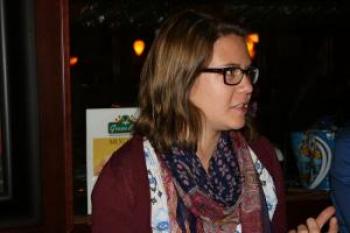 Drawing from his experience as an election judge, Shilepsky said that requiring voters without proper forms of ID to submit provisional ballots—something that would be new to the state if the amendment passes—would be preferable to same-day registration, which slows down voting.  “It’s a lot of work for judges when 500 people decide to register that day.” He said he would like to see people “take individual responsibility and show some initiative” and make sure they have proper identification before they go to their polling place to vote.

In a polarized society, Morales commented, “It’s a challenge to put yourself in another person’s shoes. If we don’t personally know other people’s situations then it’s hard to understand their experience.”

In a recent op-ed appearing in the StarTribune, conservatives Tom Horner and Tim Penny called the proposed voter ID amendment, “a solution in search of a problem”:

“Advocates of the amendment argue that Minnesota leads the nation in voter fraud. The reality? Even during the hotly contested and lengthy recount accompanying the 2008 Senate race between Al Franken and Norm Coleman — with high-priced lawyers and partisan advocates spending millions of dollars to gain any edge — fraud wasn’t found or even credibly claimed. Yet, Minnesotans are being asked to use our most important governing tool, the state Constitution, to limit the right to vote.”

The organization Protect My Vote has said that along with voter fraud, election problems which need to be addressed in Minnesota include: non-existent voters, felon voters, non-citizen voters, double-voting, deceased voters on the rolls, more ballots than voters accounted for as having voted, and vouching fraud.

For more on the proposed amendment, read what the League of Women Voters Minneapolis told participants at a Twin Cities Media Alliance Get Connected! event this summer, and study materials on their website.