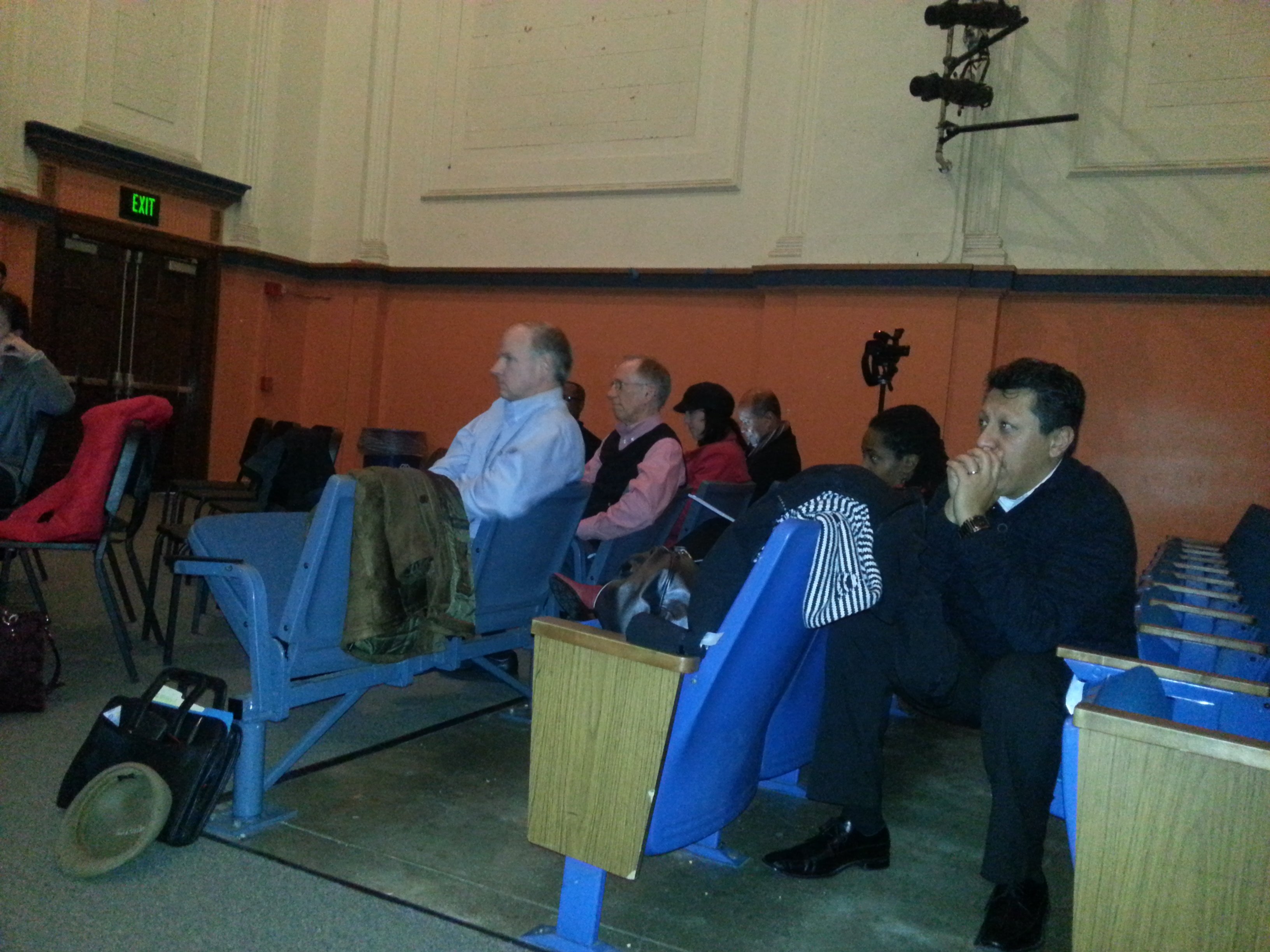 Ruben Vazquez, Director of Family and Community Engagement for the Minneapolis Public Schools, listened in at the Washburn High School meeting

Sore subjects abounded at a November 20 “listening session” at Washburn High School in Minneapolis. Beginning with an apology letter from school board member Carla Bates, the meeting addressed the proposed $40 million expansion of Southwest High, as well as questions of overcrowded classrooms, school choice vs. community schools, and gifted and talented programs.

The first issue emerged before the meeting started, when participants arrived at Washburn to find an unsigned letter placed on seats in the school’s auditorium. It was soon evident that the letter was from school board member Carla Bates, who was not in attendance. The letter addressed controversial remarks she had made at the November 12 school board meeting, when she said she made a “misstatement” when questioning the district’s plan to spend $40 million to add on to the over-crowded Southwest High School.

At the school board meeting, Bates asked why the district would invest such money in Southwest, saying, “the most important kids we want to invest in are not even there.” This statement rippled through the Southwest community and Bates wrote the letter to “apologize for speaking so poorly,” because she believes “all of our kids are ‘the most important kids.’”

What she intended to say, according to her letter, is that she believes investing heavily in adding on to Southwest is short-sighted for these main reasons: Washburn has more room for additional space, Roosevelt High School is gaining steam as a strong high school option, and her view that investing more in “high tech, individualized learning models” throughout the city makes sense.

Some parents in attendance seemed to agree with Bates that adding on to Southwest was a short-term solution at best, since the school is already over-crowded, and more space is needed for the students who are there now, let alone those who are part of the expected enrollment growth in Area C.

However, Area C parent Blaire Hartley was not sold on the idea that online learning options will help ease overcrowding at Southwest. Hartley said she understands online learning, but that this approach “discounts the traditional experience many kids want in high school.” Kids, she said, are still “brick and mortar kids.”

Hartley also spoke about another difficult topic: the large class sizes in many southwest Minneapolis buildings. Saying “we need places to go,” Hartley and other parents noted that classes are “over 30 in K-8 schools,” and some Southwest High School classes have 40 students. Hartley and others seemed to want assurance that they will not be “going from crowded school to crowded school” within southwest Minneapolis.

Another topic of controversy was the district’s current proposal to add a separate school program in the Wilder building for “advanced learners” in grades 1-5. One parent who has a second grader at Hale Elementary School in south Minneapolis said she “commends the board for adding an advanced learner program” to its five-year plan.

This parent, Rebecca Kane, said her son is in need of an “accelerated learner” program, as are about “15 percent of Hale students.” She asked how serious the board was about committing to such a program, and wanted to know whether or not they had developed a plan to address the questions of racial and economic equity that hang over gifted learning programs. Sadler said addressing such questions is a must when it comes to pursuing a special program for “gifted” students.

However, another parent from Field Middle School said the “whole advanced learner thing was rolled out from the top down” and asked if the district has looked at Field, which she said has succeeded with mixed-ability, or heterogeneous, classrooms.

This parent also touched on another sore subject, asking Sadler about what she called the mixed messages from the district around how teachers are supposed to approach classroom learning. Is differentiation the focus, she asked, where teachers work with students wherever they are in their learning? Or, is the district pursuing a pull=out model, as it is at Ramsey Middle School, where advanced math students, for example, are given specialized small group instruction?

Lyndale parent Scott Bordon and Washburn parent Margaret Richardson both questioned whether the district should pursue specialized magnet schools, such as the proposed advanced learner program, or emphasize community schools. Bordon said that “excessive choice impacts our ability to lower class sizes,” and made the point that limiting choice for parents “has been a boon to integration” at Lyndale Elementary School.

Richardson then warned that “if we’re going to go back to choice, instead of having quality programming at all schools,” then the district will be full of “little jewel box schools that everyone will want to go to.” The problem with this, said Richardson, is that the district will have to go back to busing students all over, and “transportation will be the tail that wags the dog,” which is an issue the district attempted to move away from with the 2009 “Changing School Options” plan.

The district’s final Five Year Enrollment plan will be presented to the school board for a vote on December 10.