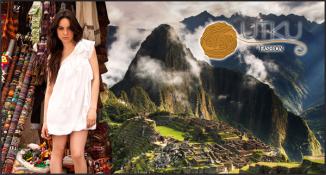 Utku Fashion, inspired by the expression of ancient Peruvian textiles and their prestigious historical significance, aims to be a bridge for Latin American designers and to facilitate the entry of their designs into the US market for the first time in the Twin Cities on October 20 through an event called “Southern Touch.”

At its first fashion show, Utku Fashion will present two designers, whose creations differ in style. One will show textiles hand-made from alpaca hair while the second will display jewelry pieces made from silver and with Incan motifs.

The Peruvian-born founder Marian Sánchez, who has business and cultural experience in fashion, has always had a desire to import the distinctive artistic styles of her native country, and introduce them to the potential of the Minnesota market.

“For me, the best way to appreciate a design has always been by seeing it worn. It’s hard to really appreciate a garment while it’s displayed on a hanger,” said the founder Sanchez. “I have observed over time that there is above all a European influence in Minnesota. Therefore, we are trying to open doors for businesses from our country when it comes to fashion.”

“This is a perfect time for Peru’s rich and wondrous fashion to be presented to the state of Minnesota. I am delighted that Utku Fashion has selected the city of Minneapolis to show a rich collection of hand-made alpaca fabrics and various silver jewelry pieces inspired by the Inca culture,” said Minneapolis State Senator Patricia Torres Ray.

In Quechua (official language of the empire of the Incas) Utku means cotton, and Incan textile art is considered one of the oldest traditions of the Andes. It was one of the most developed techniques during the height of the Inca Empire. It is through the variety of fashion that existed then and that is still practiced in the region today, that excellent results of their special artistic expression are achieved.

Utku Fashion seeks to promote cultural identity through fashion shows of different designers from all over Latin America. Beyond opening the runways of Minnesota, the founder seeks to better position the fashion of Latin America by working in conjunction with designers who want to explore the fashion market in Minnesota. Marian Sanchez is also the General Manager of LCN Media, which publishes the newspaper La Prensa de Minnesota.